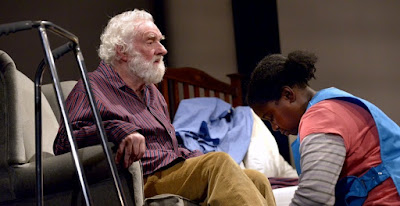 The main thing that strikes you is the brevity. The brevity, and yet still the ripples of bemusement, irritation, affrontedness, or self-back-patting-ness that radiate through the audience. It’s like watching theatre with a bunch of peacocks; alternately shirty and self-satisfied.

The trouble is this: Caryl Churchill’s [then] latest play, Here We Go – a title that neatly anticipates its audience’s eye-rolling response – is “Difficult”. With a capital D. Of course it isn’t really difficult. It’s both easy and short. Very short. 45 minutes short.

It is divided up into three sections. In the first section a nice cross-section of people are at a wake. They speak in truncated sentences, familiar from some bits of Love and Information (for instance). The device doesn’t really work any better here for repetition. Instead it feels like an embarrassingly self-conscious attempt to be arty. Yes, we could volunteer any number of our own “explanations” to account for this weird departure from the normality of people speaking in full, articulate sentences, peculiar to the British stage. That is half the trick of this particular burnished mirror-to-nature. If you stare into it for long enough, it will reward you by showing you whatever you wanted to see in the first place. Even unto a piece of revelatory art.

In the second section, a topless, pyjama-trousered old man bemusedly rails in a void. He is, we suppose, dead. Or in the moment of dying. He muses on his fate politely; middle-classly, ho-hum-ly, recognisably. It is, in fact, quite a charming few minutes of theatre. The contradictory, received ideas that old, white, middle-class, lefties have about the eternal questions are admirably anatomised. It is somewhat socially awkward to be a socialist atheist in the afterlife, it transpires.

Then there’s the last section. The piece has been running backwards, and now we attend upon the dying man’s final days, represented here by an endless cycle of being dressed and undressed and re-dressed in pyjamas and undressed again. I think I counted this taking in three full cycles from jim-jams to clothes and out again. It takes up the remainder of the play, and as such represents maybe twenty minutes of stage time? Maybe thirty.

And it is enormously unsatisfying. Perhaps it’s meant to be. But it feels like they do it just enough times for the audience to get the point, but then be allowed out in time to either to scamper round to see Evening At The Talk House, or to go and get a nice dinner – perhaps at the NT’s nice posh restaurant – and to contemplate their mortality over a nice glass of wine. They’ve endured just enough silent repetition of an action to make them think they’re really worked for their art, a bit.

This brevity in particular made me want to scream. Although, given that the majority of the audience with which I saw the play seemed to be roughly the same age as the old man dying on stage, it would maybe have seemed a bit much to keep them longer.

But it just wasn’t enough. Not even slightly. It should really have been about four hours. *Then* I’d think this was brave, experimental work, rather than a whimsical nod to it.

Beyond that, there was the *really uncomfortable racial dimension*. Now, I’m not going to sit here and deny that old white men probably *are* looked after in nursing homes by young black women. But, my Christ, it’s acutely painful to watch someone being paid to perform only that repeated task as their night’s work as an actor. EVERYONE else in the play gets to speak. Not Hazel Holder. I mean, if this section were longer, than perhaps it would seem more justifiable. And perhaps the discomfort of the racial inequality would become more pronounced. And, well, yes, there’s an interesting question of whether anyone really has any power in this situation (which is easily answered with: yes, one person has the money to pay for the other person’s services, even if their own powers are failing them). Is a parallel being drawn between the helplessness of the reasonably well-off in old age and the poor? (I presume poor, since these jobs are seldom well-paid, although, sure, that’s a hell of a lot of assumptions right there. Maybe a lot of carers work part time and have excellently remunerated spouses.) Perhaps all this has been thought about in great detail, and the thankless labour of performing a character’s thankless labour has been deemed a price worth paying for a point made properly. I hope so. It’s still intensely uncomfortable (as was the fact that a lot of reviews chose to render this labour as entirely invisible, believing that it’s the dead white guy we’re always meant to feel sorry for). (Of course we should all also feel sorry for the dying white guy. I mean, who wants to die lonely, white, bearded and alone?)

Wags could probably take great pleasure from the glancing characteristics that dead white guy (Patrick Godfrey) shares with Jeremy Corbyn. Indeed, we learn in the wake scene that DWM was also a socialist. Perhaps the play’s about the death of socialism. Certainly the awkwardness of trendy leftie atheism seems a theme in the limbo/afterlife section is no more bleak than the current battle of a left-of-centre Labour Party with a world that has moved so far to the right that it is perceived to be “extremist”.

But, yes. Taken on its own merits, this is a slight piece, with the germs of a good idea in it. If the final section were played for, say, three hours longer, it would be the boldest piece of theatre ever shown at the National. As it is, it feels like an admission of defeat.