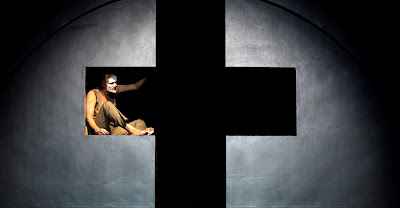 In early January last year, when “Islamic” terrorists stormed the Charlie Hebdo offices in Paris, it was a cartoon of novelist Michel Houellebecq that graced the front cover of the week’s edition. The cover was celebrating the publication of his new novel, Soumission (German; Unterwerfen, English; Submission). The subject of the novel is an imagined near-future in which France elects a Muslim Government and becomes a de facto Islamic state. The novel is narrated, like so many of Houellebecq’s novels, by slightly depressed, misanthrophic, middle-aged, white man, whom one probably imagines to resemble Houellebecq himself.

And, yes, it’s a difficult novel to admit to admiring. So much of the surface of it is patently designed to be provocative, and there’s always the concern that the impulse behind its creation is not merely benign leftist provocation. But let’s say this; while all the other consciousnesses in the book are described as secondary to those of the white, male narrator, these include all his other white, male colleagues, as well as the Muslim men and all women. And yes, while the version of Islam that flourishes in the novel’s imaginary future France is an objectionable caricature of, say, Saudi Arabia, so is actual, present-day Saudi Arabia. Nor is present-day France is hardly held up as a paragon.

What Submission really creates is a satire of is patriarchy. The big joke of the novel is that this classically “Western”, emotionally-backward, academic expert on Huysmans ends up quite pleased by modern “progressive” French society being replaced by conservative, polygamous Islamic law. It is possible to read this as Houellebecq making some sort of argument for the essentialism of patriarchy, and its demonstrable, ongoing dominance. But it’s equally easy to see it as a condemnation of precisely such a view. I don’t know how a feminist novel could skewer male self-interest more viciously.

As such, it is reassuring (while perhaps cowardly to want such reassurances) that this first adaptation for stage has been created by Deutsches Schauspielhaus’s artistic director Karin Beier, dramaturg Rita Thiele, and a mostly female production team (Licht – Rebekka Dahnke, Kostüm – Hannah Petersen)

What is then surprising, given this fact (and given my nervous need for reassurance), is that the actual production itself is remarkably *straight*. The novel, narrated by the single voice of a middle-aged white man, is transferred to stage by the cunning means of having a single middle-aged white man stand on stage and say as many of the words from the novel as can be reasonably fitted into an evening of theatre.

However, that’s not all. Yes, the novel transfers well to the stage, and remains compelling and grimly, bleakly funny – perhaps all the more so for having the frisson of lots of people laughing nervously together in public. And, yes, solo performer Edgar Selge holds the attention like a particularly charistmatic eye-magnet; dry, self-deprecating, rumpled, yet still capable of oratorical flights and lyricism. But the thing that really makes this production is Olaf Altmann’s stage design.

The piece is played in front of a vast black wall close to the front of the stage. Set into the centre of the wall is a huge disc, with a large cross set into it. The cross is several feet deep and opens onto a void on the other side of the wall. Once Selge begins to speak, the cross slowly begins to rotate. It takes fifteen minutes for it to be upside down. When it is upside down, what was the topmost part of the cross is now at such a height that Selge can easily sit himself in the now upside-down cross. As I guess we all knew he was going to. The first fifteen minutes are almost all about that wait, as much as anything he’s saying. From the point when he sits in the cross onwards, the sheer beautiful simplicity and fertile symbolism absolutely transform what we’re watching. Yes, dramatically, it’s “just the novel” to some extent, but thanks to the intervention of this design, it’s also much more. As Selge speaks François’s narration, it’s the ever changing, multiple meanings of the turning cross that we wrestle with alongside it. It’s such a clever, perfect image for the story. This little man caught up in the vast symbol of Europe, now unstable, unfixed, and even already reminiscent of symbols of Europe’s horrific past, and, with the slight shadow of a crescent cast on the revolving disc, the image of the imagined future.

That the continual revolutions of the cross necessitate Selge clambering about this constantly self-refreshing symbol is also a brilliant way of keeping the staging feeling physical and fresh throughout. Of course, we’ve seen this sort of thing before, not least in miniature for a couple of minutes during Jude Christian and Fly Davis’s Goya/Asshole at the Gate. But this is the full-size real thing. 2Hrs45 (mit pause) of rotating cross, more akin the Josef K’s continually spinning bird’s-eye-viewed room in Kriegenburg’s Der Prozess. Or, perhaps we’re reminded of the horizonal revolve of Gotscheff’s Persians, or the black wall and spinning cyclorama of Thalheimer’s Faust. It’s that kind of a structural set. Cuplture on an epic scale. And perhaps it’s no accident that it recalls the archetypal work of these white, middle-aged male directors so vividly. Perhaps the set is even self-satirising at the same time as working so beautifully.

I haven’t loved a design quite so much in ages. It *did things*. It was an integral part of the meaning of the production, and one which kept on adding to that meaning. It was the diametric opposite of that shiny white fucking abortion in Linda.
So, yes. I’m not sure I have *conclusions* about the production, or what it means. The Nachtkritik review suggests that putting the novel on stage might attract the wrong sort of interest/audience, fearing a theatre overrun by Pegida fascists, but suggests that the most inflammatory/incediary passages of the novel have been removed, and this production would offer little comfort for their Islamophobia. I agree, but it never occurred to me that racists or white supremacists might go to the theatre to see/hear their views confirmed. But then, it never occurred to me that a talented, internationally respected director would ever fall out with a Hamburg theatre over their pro-refugee stance. Until it happened.

So, as we see, perhaps the pretend paranoid fantasy of an Islamic takeover in Europe is indeed a topic that needs to be aired on our stages, and in as intelligent a fashion as this, so we can actually examine the inside of the mindset that imagines “this is the greatest threat facing Europe”.

And what “Europe” is anyway.
Posted by Andrew Haydon at 20:25