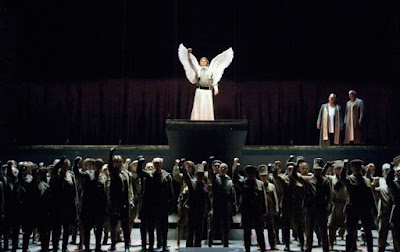 Ok. We need to talk about Lohengrin.

I mean, we know about Richard Wagner. We know who his most famous fan was. We know which film uses the prelude to Lohengrin and why. And we know where Berlin stands in all that mess.

So seeing Lohengrin in Berlin (and on Valentine’s Day! Ha!) was always going to feel complicated.

Regular readers will know I don’t know *a lot* about opera/classical music. I can tell eras apart. On a good day I can spot a composer or at least their period or nationality. And I know a fair amount of the famous stuff. I first came across Lohengrin properly when Christoph Marthaler used In Fernem Land in Meine Faire Dame. I *loved* it. I mean, I loved *a lot* about that musical, but that was a highlight even in an evening of highlights. So, yes. I genuinely do love the music in Lohengrin. I know stricter people than I will probably say that the problems with the opera start with the music. That it’s cheap, sentimental. Too ready to always go for the obvious “stirring” or “moving” bit. But, well, what can I say? I’m not strict. And I find lots of the music incredibly beautiful. The narrative bits could always be played faster, though, I reckon. No exposition or conversation need ever take *that long*.

Not knowing the opera all that well (which I think is the other good way to approach something; at least you get to be excited/intrigued by it as intended), and even knowing something of its past/fan-base, I was surprised by just how staggeringly fascist some of the songs/bits sounded.
For example (all libretto quotations from here), from the first substantial song:


Now it is time to defend the Reich’s honour;
East and West, to all I say:
let every acre of German soil put forth troops of solidiers,
never again shall anyone abuse the Deutsche Reich!

This! In Berlin! No wonder the production looks a bit beige. There’s literally no way you could dress everyone in stark, strong, bold colours to sing that, is there?

Do you know the plot? The plot of Lohengrin is bloody amazing. It’s worth reading the Wikipedia synopsis in full, but in short: A knight has accused a lovely maiden (Elsa) of being responsible for the disappearance of his little brother. She is brought before the King for judgement...

(The other main theme of the story – apart from its fascism – is astonishing its sexism, for instance, this is what the chorus have to say of Elsa’s first appearance:


MEN: Behold! The accused approaches!
Ah! How resplendent, how pure she looks!
He who dared make such an accusation against her
must be quite sure of her guilt!

… Anyway, Elsa turns up and wafts about telling everyone about a dream she had. The king decides that her innocence should be decided by trial by combat, and Elsa says she’d like the knight she’d been dreaming of to turn up and fight for her. Of course.

Then her mystery knight does turn up. On a boat PULLED BY A SWAN. In this performance Mystery Knight is played by Michael Weinius, who is a shortish, portly gentleman of the Simon Russell-Beale school. All I’m saying is that you don’t exactly get the chill of seeing a kind of proto- Aryan SS superman predicted on this occasion. In this production he is also required to wear a vast pair of swan wings on his back. In theory it’s all quite grand and impressive. In practice, they flap about quite a bit as he waddles around and it’s hard not to giggle.

Anyway, Mystery Knight wins the fight; therefore, of course, Elsa is innocent; and she Mystery Knight decide to get married, on the condition that she never asks him his name. (SPOILER: THE TITLE OF THE SODDING OPERA IS A SPOILER.)

In Act Two the bloke that first accused Elsa is in a forest with his girlfriend, Ortrud, and she reveals that she is in fact a pagan witch and *some stuff*. Read the synopsis. This bit was chiefly interesting to me firstly because it makes where you locate any actual fascism in the piece harder to place – everyone’s German, and it’s a play off between Knightly Christianity and Pagan Gods. And secondly because it really wrong-foots the easy diagnosis of sexism from the first part. Ortrud is clearly brilliant, and all witchy and powerful and full of wicked plans etc. I mean, yes, there’s a feminism that would point out (not unfairly) that this just makes her some other archetype in the lexicon of woman-hating, but crucially, she’s neither flimsy nor stupid. Think Lady Macbeth with added back-up from pagan gods (both male and female).

The second part of Act Two, well, I’m afraid it got a bit lost because there was a bit of a kerfuffle in the auditorium...

So, let’s get The Fight out of the way: while we were watching Richard Wagner’s insane opera Lohengrin, the bloke sitting next to me started taking photos with his mobile phone. It was not a discreet mobile phone. It was a big glowy one with a big light-up screen and it illuminated not only itself, but also everything else for miles around. I let the first couple of times go. Sure, I thought, sneak the odd photo. Stick it to The Man. Why not take photos from the 25th row of the stalls? The opera house almost certainly haven’t thought to photograph the production or make those photos completely available online. After about half an hour of this behaviour in the second act, I gave him a bit of a nudge. The next time, I gave him a proper jogged-when-taking-the-shot-nudge. The next time I sharply batted the phone out of his hands into his lap. That got a “Danke” from a couple of people in the row behind us who were clearly sick of his shit too. He continued. I gave up. The people in the row behind us decided that if photo-bloke wasn’t going to take a hint they were going to take his phone. It all rather kicked off after that. At one point I clearly remember him standing up and shouting at them to give his phone back or he was going to make the whole opera stop (yes, all this was being conducted in English, the international language of Philistinism). By this point I was well out of the fray. At one point it looked like everything was going to break into a proper Ukrainian Parliament fight. Eventually they gave him his phone back and he looked all sulky until the interval – mercifully only about five minutes later – when he (photo-bloke) went to complain to the ushers that people had tried to stop him taking photographs, and was promptly asked to leave. I was surprised after all his shouting in the middle of the opera that he hadn’t been ejected on the spot.

The adrenalin that gave us definitely jazzed up the evening no end. But still. Oof. Blimey. Punch-ups, eh? (And, yes, I’ll admit it did worry me that this all took place in Berlin against the backdrop of Hitler’s favourite opera, and was essentially a triumph of a majority over a little bloke who was annoying them. And that the music might have got us all a bit Clockwork-Oranged-up. Still, fuck it. Hopefully he learnt something about consideration for others... :-/// )

Anyway, I missed that bit of the opera.

Read the synopsis for part three. Basically all gets tied up in a fairly vindictive/cruel/symbolic way, and some of the best bits of opera ever written happen. And even if they are cheap and populist and sentimental, I think I still love them.

Now, all this flippancy – Wagner Fight Club notwithstanding – is all perfectly real. You have a thought-track running alongside the text of the opera thinking, ‘Oh, come ON. Really?? This?’ But at the same time, it’s actually quite fun.

Similarly, Kasper Holten’s production was, in many, many ways, terrible. (frinstance, the gathered Germanic soldiery addressed by King Heinrich covered all periods from the thirty years war through to WWI. And then stopped, leaving a big old fuck-off elephant in the room, but probably safer and more acceptable than staging the elefant. The whole chorus are done out in pale khaki and beige and grey blue, which is pretty if a bit a) kitsch, and b) difficult to see. The sets are kind of blocky, and from where I was sitting made the whole thing look accidentally claustrophobic. There’s a big old almost-another-elephant-in-the-room cross that dangles from the flies in Act 2 and functions variously as walkways and ceilings. It’s *almost* very good, but then somehow ended up feeling clunky instead of vigorous (the opposite of the cross in Submission)... The big ol’ flappy wings we’ve talked about. But, yeah, as productions go, it made me feel immensely grateful for all the Richard Jones and Katie Mitchell operas I’ve seen – not to mention making me feel I was incredibly churlish about Simon McBurney’s Magic Flute which is perfection by comparison.)

But enormous fun nonetheless. And incredibly clear and watchable.

And, blimey, the music: if you don’t know the opera, maybe the best way to explain how/why it’s great is by comparing it to the soundtrack of Star Wars (any of the original trilogy, or the last one). You know how there are about three or four *really famous bits of music* for Star Wars? Same with Lohengrin. You know how bits of each of those tunes sometimes plays at a relevant point when the character that the piece of music relates to is having a big scene. Same. You know how there’s a lot of other music that you kind of know is there in Star Wars, but you couldn’t hum it, because it just fits the action where it is and the tune isn't important? Perfect. You totally know how this works. And the Big Hit Number from Lohengrin is better than any of the Star Wars ones. So, yes, about three great tunes, and three hours of music, and by playing one of them right at the beginning and then only hinting at it again until almost the end, it feels like a masterfully constructed work of art. So, yeah. Proto-fascist nutjob tho’ he be, Richard Wagner was pretty good at his day job...

[conclusion forthcoming, once I've thought of one] 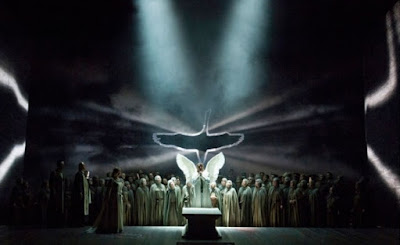