A confession: for a long time I’d rather written the Berliner Ensemble off. I’d not been especially convinced by what I’d seen of Claus Peyman as a director, I CANNOT STAND Robert Wilson, and much else about the place had struck me as a kind of Ostalgic Shakespeare’s Globe for Brecht: more a museum than a living, vital theatre.

But, well, they had a production of Nikolai Erdman’s The Suicide premièring while I was in Berlin, and I was keen to see it ahead of Suhayla El-Bushra’s new version opening at the National Theatre in April (having cunning missed both Moira Buffini’s 2007 adaptation, Dying For It at the Almeida *and* Deborah McAndrew’s The Grand Gesture in 2013 for Northern Broadsides – interesting Billington/Hickling divergence on how good the play itself is in those reviews...).  In the end, it turns out that French director Jean Bellorini’s Der Selbstmörder is a complete joy. Ironically.

To begin with, I had my misgivings. Georgios Tsivanoglou as Semyon Semyonovich Podsekalnikow is a corpulent clown of the Zero Mostel school. Which is not my favourite sort of comedy. The whole felt like it might content itself to wallow in a stylishly set (bühne also by Bellorini) version of (UK) Seventies Sitcom-land. And so, physically and comedically, it transpitres for the first few scenes. Granted, yes, the set is lovely – wide, low-gradient steel stairs in a shallow frame, rising to the second storey to reveal more of the same behind, with strip lights and neon, and endless different false back-walls – but a great ugly set is not the whole story. The situation, as it is played, feels like the most alienating of all possible takes on post-Brecht, and for a while I wonder if my German colleagues won’t also be feeling that it lacks any sort of “a take” on the play.

Then, in the famous final dinner sequence – which seems to be at least half the play – seated at a stage-wide table before a corrugated iron safety curtain, the whole thing came magically alive. The whole register seemed to change, in fact. The sitcom shtick seemed to be revealed as just that – shtick – and instead Semyonovich is standing on the table singing Radiohead’s ‘Creep’. Mikhail Bulgakov’s letter to Stalin on Erdman’s is read out by Berliner Ensemble schauspielerin of some 53 years standing, Carmen-Maja Antoni. There is *a lot* of *mucking about*. And the whole feels more ridiculous, more comic, more tragic and more desperate.

For the actual final scene, the safety curtain is raised again, and the cast are ranged out on a largely empty stage, with remnants of an iron spiral staircase and a tilted coffin frame, lit like refugees from Complicité’s Mnemonic or Robert Wilson’s Einstein...

I didn’t get the impression that the piece scored any direct hits on contemporary Germany. The production felt (unusually for Germany) too reverential and contextual for that. Instead, it plays, in a contemporary fashion as an unadulterated problem comedy of “then” that we, living in the present, must unravel for ourselves. Oddly, for Germany (but not so much for France), quite a similar solution to so many British productions.

[Also oddly, as this it the final piece I saw in my last, short German tour, worth mentioning that I didn’t see a single show directed by a German in Berlin. Two Brits, one Dane and one Frog. No Germans. Which feels either oddly inclusive on the part of the Germans, or exclusive on my part. I did take one night off, though, and the obvious thing I could have seen instead would have been Nicholas Stemann’s Live On Stage! version of the Danish TV show Borgen...]

But, yes, while nothing especially resonated for me in the present-day moment for Germany (but then, really, how would I know?), what did resonate was the history of the play and the building and the city. But, even without those resonances, this was 2hrs30 with no interval of non-stop interest and engrossment. And that felt like a regrettably rare treat indeed. Next time I’m in Berlin I should go and see more at the BE. 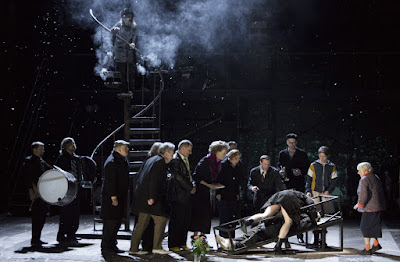