“Let yourself go” is the phrase that runs through Robert Icke’s new version of the Chekhov. It’s variously an invitation, a plea, and a terrible warning. It first crops up noticeably – arrestingly – in Vanya, Astrov and Telegin (here John, Michael and Cartwright)’s drunk rendition of David Bowie’s ‘Jean Genie’. Oddly, that moment, halfway into Act Two, is the most moving moment of the production. Three drunk, middle-aged men singing Iggy Pop’s ‘Lust For Life’ and Bowie’s homage to Jean Genet, particularly in the wake of Bowie’s death in January, seems to perfectly capture all the sadness and feeling of lives wasted of the play. Britain’s incomplete mourning for Bowie supplements the men’s endless mourning for the wastes of their own lives. They have “let themselves go” in the other sense. They have one to seed. Wasted themselves. This wasn’t what Bowie wanted for them at all.

The Professor (Alexander, Hilton McRae) and his new, young wife, Elena (the excellent Vanessa Kirby), have returned to the farm of the professor’s late first wife where his daughter, Sonya (Jessica Brown Findlay), and her Uncle Johnny (Vanya, Paul Rhys) have been tending the farm. Their arrival essentially casts a spell of let-go-ness over the whole estate. And the local doctor, Michael (Astrov, the excellent Tobias Menzies), pleads with Elena to let herself go.

What’s fascinating in this study of stasis isn’t so much that nothing happens – lots does happen – but the way that Chekhov wryly suggests that while things happen, nothing really changes. Except that everyone feels worse at the end.

It’s also fascinating to notice again, as with Katie Mitchell’s Cherry Orchard before it, the sheer prescience of Chekhov’s apparent proto-environmentalism. Of course, in real terms, it probably has as much to do with that gradual industrialisation angst that runs through novelists like George Eliot, but sitting in 2016 and watching Tobias Menzies in a beat up Barbour jacket earnestly showing maps of local deforestation to Elena feels like at least a common thread between the two eras.

And it’s fascinating to compare this Vanya with the Gorki’s “post-migrant” version I saw last year. There, the professor was the immigrant returning to his homeland; sympathetic, relatable. Here, McRae’s Professor is almost wholly experienced by us in the audience through the irritation and exploitation of his family. There’s perhaps something about a war between youth and age about it too, Vanya brokenly battling his own approaching fiftieth birthday, after which he only sees another ten years of life for himself. The language used is of suffocation, or waste, or desication. The professor’s ill health and discomforts are sticks used to beat him for his marriage to the younger Elena whom he also wastes. According to the younger men infatuated with her.

But really the main concern of this Vanya is ultimately class. In Nicholas Ridout’s Passionate Amateurs: Theatre, Communism and Love, Uncle Vanya is one of the main texts considered in the book. In a chapter that takes in Marx’s conception of labour, the realities of work in late-Tsarist Russia, the structure of the Moscow theatre and neoliberalism’s proletarianization of the professional class, Ridout describes “the problem” of the end of the play thus:


“With the departure of the idle and unproductive couple of the Professor and his wife, Vanya and Sonya resolve to abstain from theatrical behaviours brought on by the presence of this couple (doomed love affairs, bungled shootings) and to renounce the indolence that had overcome the household during their visit. In this sense, work is the grim but safe antithesis to the risks and excitements of love. It is duty, rather than passion. It might also be understood, coming as it does at the end of the play, as a gesture toward the mundane world that the play of theatrical production temporarily suspends. Let us get back to the dayworld of work after this brief sojourn in the night of play.” (Ridout 2015, p34)


“It is [Astrov/Michael's] recollection of the death of a “railway pointsman” on his operating table that provokes his agonized speculation about how “those for whom we are laying down the road to the future” might “remember us.” Work, toward a future, whether by “road” or “rail,” is established from the outset as a central preoccupation of the play, and its cost, in terms of the loss of the living, be they railway workers or forests, is a recurrent question. Each “working day” is an exhausting step toward the construction of some better world. As Raymond Williams writes of Chekhov’s plays in general, “the way to the future is seen, consistently, in work.” (ibid, p40)

What was more striking for me in this production, however, was the more simple arguments about inequality. Vanya’s ultimate breakdown is framed very precisely here in terms of his having laboured for the Professor. Yes, for other reasons too, and for the sake of work as a means unto itself. But nonetheless, it is his and Sonja’s labour that has essentially subsidised the professor’s ultimately fruitless career. Rather than, as is implied at the Gorki, the professor having emigrated in search of more profitable labour, he has merely wafted around writing books that make no money. [Vanya is also viciously, pointedly venomous on the subject of academia in a bunch of lines that will possibly strike worryingly close to the heart of any theatre blogger.]

But, it’s the framing of the professor as a landowner, as the idle beneficiary of the fruits of others’ labour that really hits home here. This is, I think, as Corbynite a production of Vanya as you could hope to see (or perhaps I chose to understand it that way because that’s what I’d like it to be). It feels almost like a dare to let things continue as they are. “Go on,” it goads us (or, at least those few of us still young enough to have a stake the future, at the performance I attended), “just leave things as they are. Look!”

There is a strangeness to that argument too, though. In Ridout’s chapter, he suggests:


“In a production of Uncle Vanya in the theatre today, at least one hundred years after the moment in which a spectator might imagine Sonya’s words to have been spoken, there is a double contemporaneity at work that undoes or loops back the implicit teleology. The spectator is the future in whom Sonya’s hopes rested. Now is still the moment in which such hopes may be entertained.” (ibid, p53)

Icke’s production is, of course, unfussy modern-dress. The names have been translated, along with the script. We’re not specifically in Russia, but nor are we specifically not. I *think* place names have been avoided altogether. The clothes could as easily be a guide to our feeling the then contemporaneity of Chekhov’s world equivalent in our own, rather than intended to say “This is England. Now.” In a way, though, it doesn’t matter. The meanings are clear, and the few key shifts in between Chekhov’s Russia and Icke’s Britain are worryingly miniscule. The conundrums about labour and exploitation, freedom and wasted lives are common it each.

I’ve talked a lot, now, about the politics, and little about the aesthetics, or the performances, which is strange, since, watching it, it felt like it was these that were the real meat of the occasion.

Paul Rhys’s Vanya/John is brilliantly singular. I’ll be honest, and admit that having seen a couple of his TV villains, I was quite disconcerted by the idea I’d be having to sympathise with him (or at least Chekhov-sympathise). I needn’t have worried. Interestingly, instead, one thing I did find fascinating was his voice, which, here, is curiously reminiscent of Alan Bennett’s (crossed with Richard Wilson’s and David Hare’s). The sound of a sadness quite enjoying the noise it makes, perhaps. It’s perfect for Vanya. Similarly, it’s brilliant to see Vanessa Kirby growing up in another Chekhov. Yes, her Masha was agonisingly superlative, and Elena is somehow a less synpathetic character, but nevertheless, it feels like she completely makes the part her own, and not just by doing similar things. It felt like there was an integrity to these decisions. There’s also the fact that she’s a really brilliant comic actress, which made her monologue (they step off the revolving stage and into a spotlight. You’d think you’d hate it, but actually it’s great) play almost like a really accomplished comedian doing a wedding speech. Although. yes, also having a real-time realisation built *into* that speech is tricky.

For me, though, the stand out performance was Tobias Menzies. (And I’m happy to concede that this is plausibly because he’s the white, middle-class man playing the character closest to my own age. *Of course* he’s the guy I’m rooting for.) What was great here, though, is that Dr Michael pretty much doesn’t or hasn’t resolved his own internal contradictions at all. Or at least, is unconcerned by the fact that he’s carrying on like a selfish dick. On one hand, all full of these high ideals, and on the other, both shallow and mendacious, without giving a toss about the consequences.

Jessica Brown Findlay’s Sonya is a perfect anti-mirror for him. Chekhov’s cruelty to his characters occasionally feels like it’s almost too much. Where in Act 1 it feels almost cruel to perfection, and the lightness with which this scene casually begins to rip everything to pieces is a highlight of the production. the climatic Act 3 row is, by contrast, pretty shouty. Yes, it’s shouting that the show gets away with, but.

The production is set on a fairly conventional room-sized stage, maybe a metre high, and with four posts, one at each corner, holding up a corresponding ceiling. The stage is on a slow revolve, and turns pretty much throughout each scene (which, if it “is [nicked] from the Young Vic Streetcar” I’ll eat my Ostermeier Nora/Blasted/Hedda). Each new act begins and ends with one of the short ends of the stage facing out into the audience, with the black blinds drawn down. (Design Hildegard Bechtler).

So, yes. It’s stylish. It’s intelligent. It’s essentially as brilliant a contemporary production of Uncle Vanya as you could wish to see. It’s very “pure”, it feels like. And perhaps, oddly, not all that emotionally affecting. Which was strange. I mean, I completely *got* that the moment Vanya breaks down and smashes a bunch of flowers against the sofa in frustration and grief and rage was awful for him. But this was knowing, recognising, understanding that it was awful, rather than feeling it. Not an especial problem for me, per se, but it did seem indicative, and strange that it hadn’t moved me more viscerally. And I have no idea why it didn’t. Particularly when three actors, pretending to be drunk, singing David Bowie badly did.

[reason for pixelated cover photo is simply that I couldn't find any pix that even remotely reflected my experience of watching it.  Not a criticism of the photographer: I was in a particular seat that you'd never choose to take photos from, even though it's an excellent seat, and the stage kept turning, and I'd choose what to look at, and none of it looked like this: 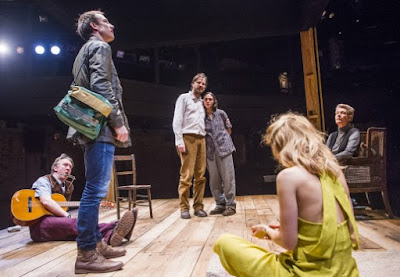 I'm intrigued by Icke because he's unashamedly cribbing the schtick of Mitchell / Ostermeier / van Hove / Benno Andrews etc etc - but heavily diluting them in the process. It's difficult to condemn him though because he does it pretty successfully. In the end though I always feel his productions are more contemporary-continental pastiche than anything else.