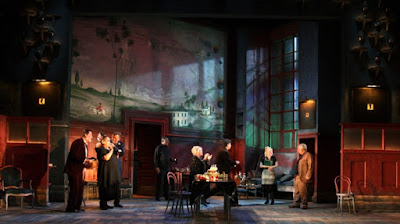 Imagine Mme Ranyeskaya throwing a party for burnt-out drone pilots and stage turns-turned-assassins and you’ve got something approaching the measure of Wallace Shawn’s ...Talk House. Dressed up like a kind of off-kilter pastiche of Chekhov, it’s actually about as brutal, allusive a play about contemporary America as you’re likely to see, also standing as a much-needed corrective to the pro-American propaganda of You For Me For You.

In Ian Rickson’s production, set by New York artists the Quay Brothers in an incredibly ugly blue/green, high-ceilinged set, I’m not sure the thing fully managed to find a form that fully communicated itself, with the etiolated atmosphere alienating as much as it intrigued. Nonetheless, experienced as a work of art, rather than a piece of drama, its massive, striking, sculptural form still strikes some horrible hits.

Essentially, it’s a riposte to YFMFY, which recognises America’s condition. That it’s nominally also a piece about old theatrical types reminiscing about their glory days just makes it all the more prickly and horrible. Like theatre could ever have been expected to help anything! Ha ha! The very idea. All this bumbling and burbling is like attending a wake for political theatre, written as a piece of political theatre. Indeed, it’s very tempting to indulge all the indignities of this staging as artistic-satirical blows against bloody theatre.

It’s telling, perhaps, returning to the piece a long time after seeing it, in an attempt to write it up, already very little remains of what happened, particularly not plot-points. But what does linger is a sense of horror and anger about the direction in which America is headed.

If 2015 began with Rob Icke’s production of Shawn’s angry snarling 1980 play The Fever. At the other end of the year, Evening At The Talk House feels like it should have closed it with either resignation or victory, instead it felt just as angry, just as pointed, and even more vicious in form, and if anything, even more necessary.
Posted by Andrew Haydon at 18:11