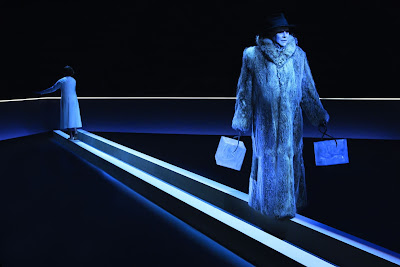 Robert Wilson’s “production” of Helmut Lachenmann’s 1997 opera Das Mädchen mit den Schwefelhölzern (The Little Match Girl) is described in the programme of the Ruhr Triennale first as “music theatre” (brilliant) and then as “Music with pictures - Directed by Robert Wilson”. To achieve this Wilson has had constructed a huge theatre-in-the-round space in one of the vast halls of the Jahrhunderthalle. The orchestra and even the singers are positioned all around the top of the seating area (apparently in accordance with Lachenmann’s original intentions).

What is fascinating about this, is that it allows a more-or-less complete divorce between the physical action of the stage and the music, sounds, and, crucially, singing that accompanies it. In other circumstances, it might, perhaps, have the effect of making the traffic of the stage feel more “narrated”. Since, after all, in more traditional operas you do still have the singing bits being carried out by the people on the stage who, more often than not, are playing the character whose words they are singing. Of course, there is the unaccountable fact that they are accompanied by musical which magically floats out from the ground just ahead of them, but nonetheless, they re there, probably pretending to be someone – someone who just happens to sing instead of speak most of the time – inhabiting their role.

Here, all that pretence is banished. The most interesting key we were given to this was by the piece’s dramaturg, who explained that Wilson very much saw himself as a visual artist here – hence the precision of “music with pictures”. Wilson has not, here, even produced a literal representation of the narrative as it unfolds, per se. Or at least, it fluctuates, but never lapses into crude literalism. There is only one little girl who appears on stage for only the briefest of moments at the end of the 2+hr performance.

It’s a fascinating concept, and one that I was wholly taken with on an intellectual level from the moment I heard it described. I was also fascinated by the concept of Lachenmann’s music and libretto. Partly, the libretto is simply the text of the Hans Christian Andersen story (in a German translation), but it is augmented by texts by Leonardo da Vinci and also Gudrun Ensslin of the Rote Armee Fraktion (or Baader Meinhof, if you prefer). The brief characterisation of Ensslin as another little match girl, a thought distilled from her part in torching a Kaufhof department store in Frankfurt, gives a clue as to how abstract, even without considering music, this version is. (Plot here, in case you don’t know the almost-impossibly-bleak-mixed-with-sentimental tale.) Indeed, listening to the dramaturg describe the extant piece, I couldn’t help feeling that if anything came pre-dramaturged it was this “opera”.

Musically, well, I’m barely qualified to talk about the music at all. I’ve found a YouTube video of a concert performance of Das Mädchen mit den Schwefelhölzern and embedded it at the bottom, so you can have a listen and see if you can describe it or talk about its musical antecedents, because I doubt I could convincingly without cheating.

Alex Ross’s enormous book about modern music, The Rest is Noise, has this to say: ‘With Stockhausen no longer taken as seriously as before the mantle of greatness fell on Helmut Lachenmann, who has said, “My music has been concerned with rigidly constructed denial, with the exclusion of what appears to me as listening expectations preformed by society.” One analyst approvingly notes that Lachenmann’s work is “uncontaminated” by the world around it. Familiar instruments are pushed to make unfamiliar sounds – flutes are blown without mouthpieces, cellos are bowed on the body or on the tailpiece, piano pedals become instruments in themselves. Fragments of the musical past float by in mangled, scorched form; childish melodies sputter into futility...

‘Lachenmann’s fractured aesthetic is allied to political convictions of a far-leftist, insurrectionary character. The libretto of his opera... etc. etc. ... Gudrun Ensslin: “Criminal, madman, and suicide... Their criminality, their madness, their death express the revolt of the destroyed against his destruction.”...

‘As usual in the German case,’ [this is still Ross writing] ‘the music must be separated from the rhetoric: for all his head-banging verbiage, Lachenmann is a sensitive composer who places his cries and whispers with extraordinary care and keeps his listener in a tensely riveted state. After a century of noise, he still succeeds in delivering authentic, bracing shocks. In the most alarming section of The Little Match Girl, fragments of Mahler, Berg, Stravinsky, and Boulez flare out briefly from the orchestra, as if someone were flipping the dial of an all-twentieth-century radio station. Crashing in their midst is the A-Minor chord that ends Mahler’s Sixth Symphony.’

As usual in the American case, the fear of left-wing thinking should be ignored. But once Ross gets into it, I think this is a more useful musical analysis and description than any I could come up with, even if the man from the New Yorker doesn’t trust ideas.

And so we get to Wilson’s contribution. In a way, I’m glad I did look up the above, because even those short passages of description perfectly capture the extent to which the pictures that Wilson has imposed upon the piece are so deeply, deeply opposite to and at odds with everything that the music seems to be doing or saying. Now, again, I’m fine with counterintuitive staging. While I was watching Das Mädchen mit den Schwefelhölzern, I was reflecting over and over again on how intellectually I didn’t have a problem with anything that was being done. But at the same time, how it really wasn’t working for me.

The best explanation I’ve come up with is that if Wilson’s input here is as a visual artist then, well, it’s kind of okay not to really like someone’s pictures, right? On one hand, there were definitely moments where you could observe a real artistry in the marriage of image to sooundscape. But much of the time, you feel that Wilson could have made these picture any time in the last thirty years in a silent room and just shipped them in on a truck. And, again, even that might have been fine if I’d liked the pictures at all. But I simply didn’t. Ok, there was some stuff where there weren’t any people on stage where smoke machines and dry ice did their stuff under some regrettably purply-blue, very eighties lights, and that was quite pretty. And the flaming chair that descended at one point was good. And the preposterous boulders which turned up Stone Henge-style close to the end were suitably hilarious.

But the rest? Oh, Gawd. Wilson’s key shtick here it to have two figures – dressed in kind of eighties Victoriana, with Tim Burton character hairsprayed hairstyles – move Very. Slowly. Indeed. and pull fantastical faces forever. They are lit like one of those posters for “boys bedrooms” in the eighties which typically included some neon lights and an airbrushed picture of a car. One of the blue ones. Not a red one. The whole looks a bit like a slightly animated Visage album cover.

Fine. Whatever. It didn’t like how it looked, or that fact it barely moved for two hours. So, I’m shallow. I’ll live with that.

Was it doing anything else? Frankly, I hardly cared. I was impressed by the way that when I came out, despite having loathed the visuals, I couldn’t imagine it having been done any other way – at least until I regained my senses. As there had been nothing else to do while looking at his staging, I did have a shot at reading it, but it seemed curiously keen to resist even this blameless activity.

What I did ponder instead, given that I was seeing this only the week after Secret Theatre opened to some bruising reviews not dissimilar to that which I’ve just written above, was how one goes about writing about something which you really don’t like without massive levels of projection onto the piece concerning the motivations of the makers (Lyn Gardner’s belated Show Two review published today contains one such line (“Its self-conscious knowingness can irritate and exclude”), Maddy Costa’s Secret Theatre round-up contains many). But much worse than this is the leap many critics make toward the absolute when they see things they don’t like, damning anything from an option to a genre in a bid to add intellectual weight to a personal preference (I’ve written about this tendency before). And it was interesting to reflect that my instinct kept saying “this doesn’t work because...” and naming some spurious part of the show’s dramaturgical machinery, when I knew full well that I’d seen other shows use precisely the same means and achieve ends which I’d really liked. So I had to keep slapping this impulse to describe the piece as “cold” or the director as “unfeeling” or (unforgivably) “borderline autistic” and not making pronouncements about “how the visuals needed to be more sympathetic to the score” when this was not it. Not it at all.

So, yes, what I will say is this: I just think Robert Wilson has had his day. I think he probably was incredibly exciting in the 70s. And hasn’t been since. I think he trades on a reputation which is now made up solely of Chinese whispers, and I think it’s damaging that otherwise frighteningly tasteful and informed festival directors still give him work. I wish anyone I’d seen the piece with had argued back and defended a great piece of visual theatre, but no one did. The music was incredible, and I was heartily grateful to have experienced something so unlike anything I’d ever experienced before. I just wish anyone else had been in charge of what I was looking at. Gisele Vienne or Sasha Waltz, for example.

Anyway, here's the music. Bet none of you can sit down and listen to it all the way through in one go.

Annoyingly, as at the top, photos make the whole thing look rather more beautiful than it actually was. 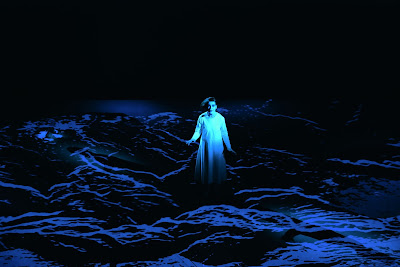 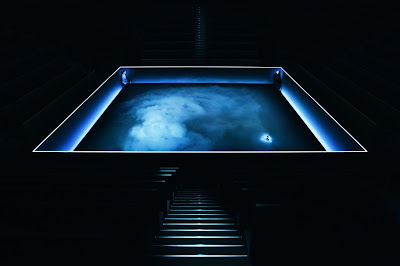