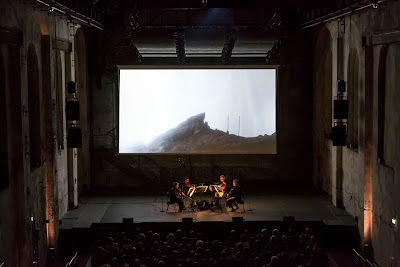 It’s really is about time I just stuck up whatever stuff I have hanging about from the rest of my Ruhr Triennale visit if only to clear my desktop slightly, and so I can link back to it when I inevitably start boring on about it in other reviews.

As with everything else I saw at the Ruhr Triennale, this wasn’t theatre. I don’t say that as some sort of stuffy English critic who refuses to recognise anything outside a narrow band of stage-bound naturalism as theatre. This was a screening of a film, a string quartet playing, and then the string quartet playing the music to accompany a second film. It wasn’t asking to be categorised as theatre. So, like the perverse fool that I am, that’s precisely how I watched it. (Well, ok, not the film. That was definitely just a film.)

But there is something compellingly theatrical about watching music played live. And in this case – a string quartet almost marooned in the centre of a vast stage, loomed-over by a huge screen – it seemed more theatrical than mere chance. After all, with an orchestra, even in a purpose-built concert hall, there seems slightly too much going on to be able to watch the thing as theatre. With a string quartet it feels more manageable.

Something else I found again – as I’d previously found with Sasha Waltz’s Continu and even, perversely, with the Robert Wilson directed staging of Helmut Lachenmann’s Das Mädchen mit den Schwefelhölzern – was that if someone just sits me down in front of a piece of “difficult” modern music and gives me something to look at while I’m doing so, then I tend to really engage with the music in a way that, left to listen to it on my own, I’d probably never quite manage. As such, it strikes me that we all need to see much more of this sort of work live. If the case that theatre makes for itself is its liveness, then I think this goes more than double for contemporary orchestral and chamber music.

Another interesting theatrical invocation was the fact that the third piece – the new Quay Brothers film/animation, a response to Witold Lutosławski’s String Quartet only string quartet, is subtitled “a paraphrase on the Hour When We Knew Nothing of Each Other”, the wordless Peter Handke play from 1992 (which was staged – badly, the more I think about it – by James MacDonald at the NT in 2008).

I’m afraid I don’t really have much by way of reflection or conclusion about these three pieces. Again, the venue in which we watched them was ridiculously beautiful. I loved watching the music. I thought the films were interesting and well made. And I was fascinated to be seeing something which was so “high-art”, with genuinely no discernible “function” whatsoever. You really couldn’t say this performed any of those stupid things that the Arts Council is always using as an excuse for why the arts should be funded. And yet, at the same time, the very fact that it was there, and it was made with public money seemed to justify both the art and the expenditure. It made me think a lot more about “difficulty” and “beauty” and “strangeness” and “awe” as ends in themselves. Ends which deserve public funding.