Stan’s Cafe are one of those hugely influential, well-regarded, experimental theatre companies whose work I have never actually managed to get round to seeing. Their most famous piece being All The People In The World, in which tonnes of rice are used to represent people and are then put in various piles representing – depending the size of the show/commission – from national populations through people killed in various wars, atrocities and genocides to whimsical numbers of holders of particular titles or records (this is my rough understanding). And apparently there’s a live version of that, and an installation version. The company have their base in the A.E. Harris building, which is a little, disused warehouse in an easily overlooked quarter of Birmingham.

Twilightofthefreakinggods is the company’s way of saying goodbye to the building in its current, open-plan, unstructured configuration as (, effectively, still) a warehouse. In January it re-opens as a (I presume, slightly more structured, fixed) 50-seater venue. I have no idea of why this decision has been taken, nor why it feels so permanent to the company (perhaps they’re going to build some actual walls, put some insulation in, and do a bit of painting). [edit: "what's happening with AE Harris is that the large space that you were in is being reclaimed by the owners so that they can once again do manufacturing in there, so the company are having to move out of the space that has been the major base for pretty much the whole time they've been there, into a much smaller studio-sized space elsewhere in the factory complex that they have used primarily as a prop store up to now. So this is very much the end of one era and the beginning of the next and it was not a decision of their making." - Andy Field on my FB wall.]

As farewells go, it’s an admirably egotistical gesture. By calling Götterdämmerung the company is, after all, invoking Wagner’s version of the destruction of Valhalla. One gets that they’re being tongue in cheek about their level of self-mythologising, but part of me can’t help wishing they weren’t being. Keine Ironie is not a bad motto.

It’s worth also noting the programme note which begins: “Twilightofthefreakingods runs without rehearsal, from a strict timetable with improvision filling in the gaps. It is Wagner’s Götterdämmerung without the music or libretto. It is also our second ‘austerity production’ with many props and costumes recycled from other shows...”

All this is pretty abundantly clear from the outset. As I noted on Twitter, thanks to the freedom in the room (not pitch-darkness, no requirement to stay in your seat), I quickly went online (iPhone – curse and blessing of the modern theatregoer) to look up the plot of the opera on Wikipedia. From this moment on, it seem pretty clear to me that I was reading from precisely the same source material as the company. Everything unfolded before me just as Wikipedia said it would. Albeit, Very Slowly Indeed. I believe the company were doing the action at a speed that meant it was exactly the same length as – well, at least one recording of the piece.

The problem for me – and I will admit I was almost certainly alone in this being a problem – was that the event was also very much configured as a social event. Which is fine if you are with friends, or possibly even if you’re feeling sociable. Sadly, I was neither. I was on the third day of a cold (which I still have. Pity me) and, though grateful for the fact I could go outside to smoke, cough, blow my nose, whatever, I could also have done with something a bit more involving or evolved to have been watching in the interim. Without Wikipedia-plot-cheating (or, y’know, actual knowledge), I have *no idea* what I’d have made of it. With it, I think I was slightly irritable about the fact that they were just miming out the synopsis with little or no hint of *anything* else.

Which, I concede, is a fine enough experiment. I believe it was a free event. No one had the slightest hint of gun-to-our-head to even stay once we’d arrived, the atmosphere was pleasant (if insanely cold), but at the same time, I can’t help feeling that a bit of rehearsal, or more ambition *towards* something bigger would have almost certainly yielded much more exciting results.

I should also admit that I only stayed for two hours of the possible four (needed to catch a train – otherwise I would have probably stuck with it), so it might have all kicked off as soon as I left. On the other hand, they’d already had two hours.

Ultimately, it feels ridiculous to really offer this either as a review or analysis. And so, I suppose it exists only as a statement of personal preferences. That we Brits didn’t rejoice quite so much in linear thinking.

Stan’s Cafe were also unfortunate in that only a week previously in Berlin, I’d happened to have been invited to The Opera Group’s open rehearsal which was also completely improvised, and completely unrehearsed. And had been mesmerised by the level of concentration and talent available in their room. They had amassed some of the most fascinating performers I’d ever seen, and I was just sat in an ostensibly empty, sunny room watching them negotiate their performances into tantalisingly *readable* manifestations of narrative, non-narrative, collaboration and difference. 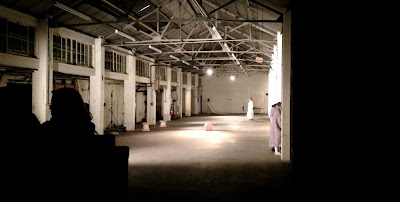 Well, I just had a stab at “Storify-ing” the LiveTweeting I did while watching this, and it’s only come up as a list of click-through links to the tweets I wrote, so anyone who can teach me how to use Storify is very welcome. In the mean time, this means I’m going to have to have a stab at writing the damn thing up properly.

In the series of things I’m currently writing, I feel like I’m basically clearing the decks; writing up a load of stuff I’ve seen recently which has made me think about various aspects of theatre and writing about it without necessarily naming those aspects. Or with the things I’m most interested in getting lost amidst a welter of (crappy-)photo -journalism.

I think my vague plan, once I’m through writing, is to go back and re-name the various posts as the thing I was thinking about. This review, if the re-titling goes ahead, will become either: Experimentation and The Right To Fail or Context Is All. 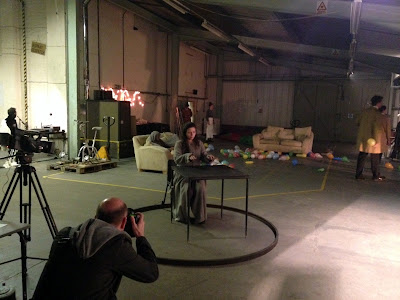 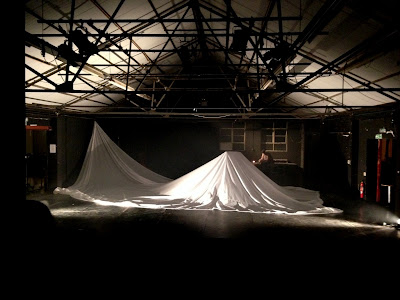 As you can see, it photographed pretty well, though.  Maybe on the right night I'd have thought it was awesome...
Posted by Andrew Haydon at 17:19