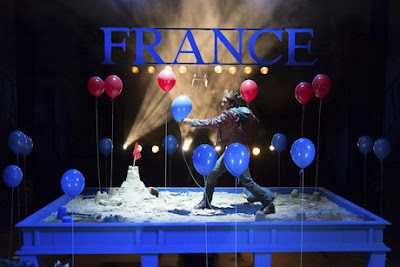 Coming late to Ellen McDougall’s new production of Ignace Cornelissen’s Henry the Fifth for the Unicorn Theatre, I find the the wind taken out of my critical sails by Matt Trueman’s pitch-perfect review of it. But then, it was also Trueman who recently proposed the idea of ‘reviewing as team-game’. And, if we’re serious about developing criticism beyond nine nigh-on identical reviews all coming out the morning after press night with 350 words apiece and a star rating, then it’s an idea worth thinking about.

What Trueman’s review does, I think, is pin down reasons to celebrate McDougall’s production, christening it ‘regietheater for children’ (on Twitter), and offering an intelligent appreciation of the precision with which the symbolism of her production lands.

So, on one hand, if only Trueman’s review existed, this production would already have been amply served, critically. On the other hand, I’m not Trueman, and I don’t think he and I actually watch theatre in the same way, so perhaps what excited me about Henry the Fifth was different to what excited him and this multiplication of voices will helpfully refract a fuller picture of the show.

So, first things first, what is Henry the Fifth? Well, it’s a re-write of the Shakespeare play in Belgian (Flemish? IDK) for children by Ignace Cornelisson – who also wrote last year’s hugely enjoyable version of A Winter’s Tale (which ended with the statue *not* coming back to life, because that doesn’t happen and children apparently need to know that?!). It’s been translated by Unicorn artistic director Purni Morell (fluent in Belgian (amongst other languages) and one hell of a writer (and director), too. Sickening, really).

Cornelisson/Morell writes with a brilliant fluency, to the point where the whole feel of this piece is more like improv or a devised piece than scripted drama. I mean this quite literally, there is mock-improvisation – I think – and ad-libbery galore *written into* the fabric of the piece, but it all feels like it is really happening in the moment. Credit for this must obviously also go to McDougall and her four-strong cast (Hannah Boyde (Katherine), Rhys Rusbatch (Distant Cousin) Abdul Salis (Narrator) and Shane Zaza (Henry)) – one of those small ensembles without a weak link amongst them, all differently brilliant, and really sparking off one another with an ease and playfulness that makes other theatre suddenly seem leaden, effortful and impossibly mannered.

What’s also brilliant about the text is that it absolutely guts Shakespeare’s Henry V and guts it in such a simple, unassuming way, that you do wonder why everyone doesn’t do this every time they stage a classic (yes, yes; like the Germans do, without even getting “a writer” on board). By putting the narrator centre-stage – an updated version of Shakespeare’s own Prologue of “Muse of Fire” fame, who deals out-loud with the paradox of being on stage and yet not being a character – Cornelisson gives himself licence to just tell us stuff that he thinks. Through this new dramatic licence, he sets about eviscerating even the slightest notion that anything in Henry V might be celebrated as noble or laudable.

Now, I don’t like preachy plays. What’s fascinating here is that this doesn’t come across as “preachy”. It is just direct. It’s a challenge and a confrontation. To the play, the the play’s history and to the audience (which, given that its intended audience is mostly eight-year-olds, is pretty cool, I think). Rather than slyly demonstrating or confirming the author’s thesis or bias with events and outcome, instead the piece just keeps on asking questions as the narrative progresses – having the actual narrator asking the actual characters what on earth they think they’re doing. It also features a neat and totally charming meta-theatrical trick whereby the French Princess, Katherine (you know, Emma Thompson from the film version), sick of her role as simpering second fiddle simply refuses her destiny, tricks the narrator out of his job, and re-tells her own role and fate. In an outstanding cast, it seems unfair to single Boyde out for praise (so I’ll get round to the others), but her combination of strangely comforting actor-voice (she really does have one of those early NT/RSC female lead voices, like a young Maggie Smith or someone) and totally modern feminist not-fucking-about is pretty damn inspiring. (And, yes, I reckon having female characters on stage who just say “no” to their medieval roles is the way forward with history plays for eight-year-olds.)

Having the male pro- and an-tagonists fluidly and fluently inhabit their roles as if they were badly behaved boy-children – all petulance, sulking and sudden violence – both gives the audience a completely relatable way in (including for this 37-year-old child) and makes an excellent commentary on the way that medieval politics were conducted. That it resonates so clearly with modern politics – that “France” (the country) is played by a sand-pit doesn’t exactly stop us from drawing parallels with some of Britain’s more recent armed tantrums. What’s brilliant about Zaza and Rusbatch is that as well as playing petulant, they are both still also remarkably charming and funny. Similarly, Salis’s narrator does a brilliant job of bridging the potential gap between the young audience and the – when you think about it – deeply odd story they’re being asked to imagine their way into.

McDougall and her designer James Button (and “Wardrobe” – Tereas Pocas – no idea who that means designed the costumes)’s staging of the thing is also just awesome. Empty stage. Then a massive sand-pit on something like a giant blue snooker table on rollers is pushed in as “France”. There’s also a big old sign hanging down from the flies which says “FRANCE”. When Henry goes back to England, ENGLAND is played by a huge St George flag, spattered across the bottom with mud. And it manages with this one visual image to perfectly evoke muddy old England, those Nike adverts featuring Wayne Rooney that there were during the last World Cup, the tribalism, the bloodshed, all captured essentially by abstract art. This also feeds into the excellence of the costume design which modernise the medieval militaria to a kind of off-beat All Saints collection, with Henry in a deep red leather jacket and France in slightly more old-school blue robes.

Both armies are played by red and blue helium balloons, tethered to man-height bits of string attached to mini-sandbags. This is very funny, then strangely touching, and then gives way to some properly nasty violence at the end. *Every* balloon is stabbed, popped, slit or otherwise murdered in the climactic battle (my possible only niggle (out of the whole production, in fact) is that, given that the final battle is Agincourt, it would have been quite fun to see Henry take out all the French balloons with a little bow and arrows, but that just possibly might have taken longer and made less of a point). As The Horror of War On Stage goes, it’s very possibly the best I’ve seen. Just two blokes descending into childish bloodlust and popping a load of balloons who we’d come to understand as thinking, feeling human beings. It’s kinda genius really.

As Trueman said, what’s remarkable about the production is how straight-forward and not-especially-radical all these actually-quite-complex semiotics and radical gestures feel. It’s quite perplexing to consider that as theatre-for-children this doesn’t even being to frighten the horses, whereas if this exact production were placed on the Olivier stage at the NT, you imagine there’d be all sorts of complaints.

My step-further proposal is that far more Shakespeare and other classic texts (and new plays for that matter) should be treated with this degree of fluid liveness as a matter of course. In the mean time, the Unicorn is pretty much where the real action is at for up-to-the-minute thinking on theatre.
Posted by Andrew Haydon at 10:37