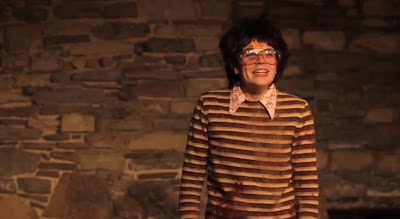 A 20-year-old young women arrives at the flat of an older man. She has identified him from the initials on the collar of a dress-shirt into which her mother (it is eventually confirmed it was her mother) has just bled to death on the landing outside their apartment. And she wants to know who he is, and why her mother would choose to bleed, from a self-inflicted neck-wound, to death into his shirt.

If I say Haley McGee’s Oh My Irma reminds me of David Lynch, which I intend as a compliment, I suppose it is partly down to the accent and the oddness of it. What is incredible about Oh My Irma is the way that the atmosphere of the piece works. The protagonist, our host, “Mission Bird” (we never really find out if that’s her birth-name or just something that she calls herself), is partly a nervous wreck and partly this completely charming, playful creature. Half the time she seems more than completely in control. The other half she is falling over her words, back-tracking, nervously correcting herself and experiencing involuntary tics.

And what she’s talking about... And how she talks about it... Jesus. She’s working her way back to us here in the present by relating a recent series of shocks and trauma. The story, in lesser hands, could have become a very heavy handed research-drama about the damage that self-harming single-mothers do to their offspring. This is nothing of the sort. Here the protagonist’s mother’s intentional self-wounding is almost glided over with poetic imagery in a way that makes it all the more harrowing for the listener. Mission Bird, the literary creation, sits on a perfectly judged gulf where she has both normalised everything in her life, but is still, possibly to her even unaccountably, troubled by it all. ‘This is what happens, this is what my mother does’ she seems to be saying, at the same time as ‘Oh. My. God. What is happening? Why are you doing this, mother?’ There is matter-of-factness about appalling anecdotes, and a strange exhilaration in the telling of some really very normal conversations.

Bird gains entry to the flat of the man – initials P.P., according to his shirt – and meets his fat dog. She is disgusted by his fat dog. The fat dog’s name is Irma. Bird is appalled. Why has this man, so inextricably tied up with the death of her mother, named his fat dog after her?

– Something interesting about being able to see this show twice is the effect of going in the second time already knowing all the answers to this puzzle-box of the script. The first time, having foregone reading any pre-publicity material whatsoever, I couldn’t have even told you for a long time whether I imagined the protagonist was meant to be a boy or a girl, or how old they were. This information does gradually arrive, but it was fascinating watching the second time with a real sense of clarity and focus on how the outcome is reached; where, during the first sitting, you claw avidly at any fact dropping out of the narrative for a better purchase on the universe being related. Neither way of watching or outcome is *better* –

I loved seeing a piece that used the imaginative latitude which theatre can provide against audience complacency. For example, *obviously* McGee is a women, but on stage, in a short wig and androgynous, genderless clothes, she could have been *meant* to be a boy or a girl or even kind of *neither* – which actually feels about closet to a gender which Mission Bird might inhabit. McGee has even suggested that Bird might actually thinks she sort of *is* a bird. So, not knowing what she is *meant* to be, we end up watching and listening far more closely for clues to her identity. Similarly, Bird’s language is so stylised that she could be theoretically, at least until some crucial details turn up half-way through, anything from six to twenty-six. Maybe even beyond; although there’s a level of naïvety signalled which I think would have to be played differently is the character were meant to be any older.

There is something glorious about the spark and fizz of the writing itself too. As we’ve established, Mission Bird is a pretty singular creation. I think even in the world of the play, and in her own mind, Mission Bird is a creation of herself – a product of rampant creativity, imagination and neglect. And the language of the text completely crystallises this into a near-tangible sonic form. Watching, you get the appalling sense of someone who has either been outwardly-mute and talking in their head incessantly to themselves for twenty years or else someone who speaks very quietly, quickly and untutored to themself. It’s a half-eloquence which is heartbreaking.

Similarly, Bird’s physicality – presumably a collaboration between performer McGee and the piece’s original director Alisa Palmer – is a beautiful creation. Seeing it more than once allows you to notice that it is as regimented as ballet, while feeling as free and coincidental as an afternoon stroll. Work is done. Marks are hit. Precision happens. There’s an extent to which, watching the movement, you briefly realise you could even take away the words (which would be stupid) but still have a hell of a show left to watch, so total is the language of gesture. None of this strikes you at the time. It all feels kind of normal. Like everything is this good all the time. Like theatre is just like this. There’s something inbuilt about how disarming the show is. The creation of the character is so complete that you totally forget in-the-moment to be impressed by how well it’s been achieved.

Much the same is true of the piece’s story arc. Light and dark all at once; jagged, vivid – impossible to listen to comfortably, impossible to look away from – like a series of car crashes watched in a thunderstorm. There’s a neat dramatic irony too which to explain will require a [SPOILER WARNING] – Bird has gone out in search of the male absence responsible for the death of her mother, Irma, and ends up becoming a very present, very female, almost avenging angel figure who leaves a cowardly but ultimately lonely and pre-broken man’s life in tatters, murdering his dog, Irma, and smashing a statue that was precious to him. [END SPOILERS]

It’s an incredibly brutal conclusion to the piece. Brutal and somehow all the more satisfying for it. Unlike about 99% of theatre – especially one-person-shows – ...Irma doesn’t shy away from the conclusion that everything might not really turn out all right. That some damage is too hard to shift straight away. That people do break things. Perhaps not on purpose, perhaps just because of panic. But that those things which get broken might just stay broken.

And yet, even in all this, even at the height of these bleak conclusions, there’s something redemptive about the fact of hearing the story at all. About Mission Bird’s determination to even tell us. Some element that speaks to the fact that by sitting in a theatre watching this story, we’re somehow doing something helpful about the way the world is, and about how the world might be made a bit better.
Posted by Andrew Haydon at 21:21