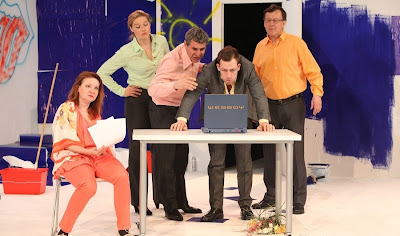 Collaboration is the most important topic in theatre today. All the most progressive work being done either on-stage or off- is dealing with the question. It is the question of how to talk about and discuss collaboration lies at the heart of Duška Radosavljević’s seminal book Theatre-Making. It is the core of Catherine Love’s forthcoming ICA lecture , and it was the question that fuelled the gulf of total incomprehension of (some) New Writers at both New Work and regietheater. It is both the spectre that haunts the fearful old age of David Edgar and Edward Albee and the driver of the most forward-thinking, fertile Shakespeare scholarship.

Europa is a collaboration. It is a collaboration between four EU member states: Croatia, Germany, Poland, and UK, or rather between four cities: Birmingham, Bydgoszcz, Dresden and Zagreb. Or rather, four companies/buildings based in those cities. It is a collaboration between four writers: Lutz Hübner, Małgorzata Sikorska-Miszczuk, Tena Štivičić and Steve Waters (all presumably chosen for their outstandingly national-sounding names). It is directed by the Polish director Janusz Kica, Dramaturged by a Brit, Caroline Jester, and has a design credited to “Ivana Jonke”, which I assume means Sven Jonke and Ivana Radenovic, the Austro-Croatian design team from Dresden. The acting company is also composed of two actors from each participant country.

From entering the Rep’s (I think totally new) Studio space nestled inside Birmingham’s new, swanky, perplexingly-over-designed library, which is now bolted onto the refurbed Rep., and seeing the open, white-box-like set; the title “Four Kingdoms?” was difficult to put from one’s mind.

And so it sort-of proved to be. Except where Three Kingdoms made the most elegant case imaginable for prolonged, sustainable, continuing pan-European collaboration, Europa had the feel of something which had been put together by a committee in a hurry and wasn’t quite finished yet. (3K trainspotters would have been amused to note the inclusion of La Paloma, the song so ubiquitous throughout 3K as a theme for sex-trafficking, and the use of the Beatles’ song 'Blackbird', almost certainly *not* intended to echo both the character of the White Bird or the use of 'Rocky Raccoon' in 3K.)

In manifestly collaborative pieces such as this, the game of “who did what?” is as tempting as it is precarious. So, I will stick my neck out and imagine that it was quite easy to spot the main frames of each writers’ contribution: Hübner writes, in German (and English?), about the original classical-mythological figure of Europa herself, Štivičić creates some (very funny) scenes about various artists applying for EU money for an artistic project, including some lacerating commentary on her native Croatia’s national self-mythologising as an eternally pacifist country, Sikorska-Miszczuk’s main contribution appears to be a weirdly folksy hallucinatory tale of the leaders of the four EU countries involved all picking pictures of animals on cards from some deck of animal-picture-cards and reflecting on how this animals might reflect on their countries, which didn’t seem to tie in to much to do with either anything else that was going on, or anything beyond Sikorska-Miszczuk’s ideas of what these four countries are like (for which, read: I was more intrigued by her version of David Cameron and Britain than I was convinced). And Steve Waters, well, I imagine Steve Waters’s bits were the bits about sceptical UK immigration officials nearly sending a blameless Croatian-and-Pakistani muslim couple into extraordinary rendition. Waters’s hand might also have been involved in some of Hübner’s tale about Europa turning out to be Phoenician and Phoenica’s location being the modern-day Lebanon. And, y’know, the irony of that.

The pieces are intercut – and frequently surtitled – so there’s also a fair amount of discombobulation to contend with; while Kica’s European-by-numbers direction – painting the walls through the play, *not-Live* video feed, bit of stage mess (I’ve seen other stuff by Teatr Polski Bydgoszcz, and it was *a lot* better than this) – neither helps the piece to cohere, nor grapples with it in a way that suggests an interesting take on the text.

None of these points, by the way, should be taken as out-and-out markers of why the piece doesn’t quite succeed. Nor should they be read as objectives standards which have not been reached. I can imagine a mish-mash of different texts being similarly curated and directed working beautifully. I don’t even think the manifest lack of a common goal need especially be regarded as the issue here. But, nonetheless, while the evening is watchable and competent, it is little more.

That said, I did wonder if I was the ideal audience member for Europa. Being English, having lived in Germany, having visited Zagreb and Poland, and having read quite a bit about the histories and current issues in these countries, while it was a pleasure to be reminded of all that research, and all the theatre I’d seen in those countries, I don’t think this piece was the eye-opener that it might have been for someone who’d never really especially thought about the relationship of Germany to Croatia or Poland and England before. Since I seem to spend my time doing little else, I might have wanted a bit too much.

But what was perhaps most striking was what felt like a singular *lack* of *collaboration* on show here. Instead, it felt as if the four constituent countries were all (probably even unconsciously) making a kind of case for their own brands of national identities (the classically-pointing Germans, the angrily ironic Croatians, the more wearily, almost traditionally/resignedly ironic Poles and the obliviously dialogue-heavy, insular Britons) and these fierce upholdings of national patterns was being barely held together in a little box slowly being painted in the colours of the EU flag. Of course, one could suggest that that’s a perfect metaphor for modern Europe (although it’s perhaps amusing to note that of the four participating countries only one has the Euro, and that’s the Germans, for whom the Euro seems to be the national currency, albeit inconveniently shared with southern Europe). Except that the rest of the play did, at times, and in its conclusion, seem to be interested in investigating the fact that, by virtue of shared DNA, we can observe that someone who might have started out as a Phoenician in pre-biblical times now shares their DNA with people living all across Europe and far beyond. So, where does that get us? On one hand we’re all closer than we think, and on the other hand, national boundaries, new, old, and shifted, still seem to play a disproportionate part in our thinking.

So, yes. Collaboration is important. Probably the most important thing to acknowledge when writing about theatre. But perhaps we still have some way to go before our present collaborations reach the same level as Shakespeare’s.
Posted by Andrew Haydon at 18:45