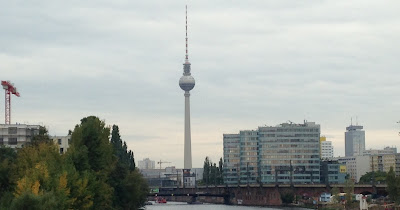 Ok, so, thanks to an extensive amount of travelling in the last few weeks – after Romania, a few days at the Ruhr Trienniale, a week back in London in the Secret Theatre rehearsal room, and then an utterly perfect week in Berlin – I’ve managed to build up quite a backlog of reviews/think-pieces that need writing. I’m a bit conflicted about how to go about doing this. Part of me wants to review everything in strict chronological order, but I think it’s going to make more sense if its covered in more or less precise reverse chronology. As such, as with Romania, this post is eventually going to serve as an index for everything putting it in the “right” order, but for now, it’s just a place-holder with a pretty “cover photo”.

[and then, actually, written as introduction for Capitalista, Baby! but palpably unrelated to the actual show specifically...]

Last week in Berlin, I had quite an odd time, theatrically-speaking. Put simply, all three German shows I saw (I also saw Canadian Haley McGee’s astonishing Oh My Irma at Theater Discounter and caught an open rehearsal for The Opera Group’s R&D process of their new piece directed by the very English Frederic Wake-Walker with liberetto commissioned by Croatian Scot Selma Dimitrijevic) felt weirdly, well, “English”. Or, rather, it didn’t feel inconceivable that any of them could have been produced in Britain. Not one of them contained a single animal head or extended sequence of stage-nudity. And indeed Das Himbeerreich at Deutsches Theater was more or less exactly a German Power of Yes. I have been wondering about this.

Partially, I think it is to do with the massive leaps in staging that mainstream British theatre has been making in recent years. With young designers like Tom Scutt and Chloe Lamford and a raft of directors from established talents like Katie Mitchell, Ramin Gray and Sean Holmes through to younger names like Joe Hill-Gibbins and Michael Longhurst all clearly turning their eyes east across the North Sea – and more crucially, fulfilling a growing demand from audiences that they do so. As such, it simply becomes less and less surprising that we see work of visual and metaphorical flair in Britain (thank God). However, all three German shows did also seem notably restrained on the visual excess front...
Posted by Andrew Haydon at 10:54