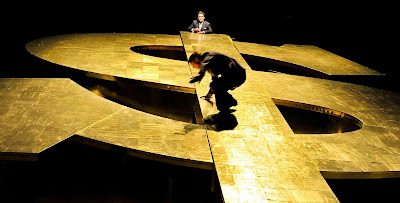 Directors Tom Kühnel and Jürgen Kuttner’s Capitalista, Baby! is an adaptation of Ayn Rand’s doorstop novel The Fountainhead. (Interestingly, despite it being an excellently playable script – I was lucky enough to catch a performance with English surtitles – no writer is credited. The dramaturg is the excellently named Claus Caesar.)

What it’s like is a bit like how I imagine Patrick Barlow’s version of The 39 Steps to be (“imagine” because I’ve somehow managed to never see it). Or perhaps The Reduced Rand Company. Ok, it’s not quite so much with the frantic costume changes and the playing of multiple roles, but there’s a similar mixture of affectionately sending-up the source material and period pastiche.

And it’s brilliant. It’s really watchable, ripping-yarn good fun, and at the same time presenting and wrestling with the difficulties and problems of the novel. I have to say, I think this is a German production which could actually do really good business in the West End, not just hidden in a heavily subsidised art-house theatre for a three-day run. Which is a strange thing to realise. But, yes, this has massive popular crossover appeal. (Although maybe would-be producers would want to put English or American actors into the roles, rather than expecting a mass audience to read surtitles).

What’s also interesting is the extent to which it made a perfect companion piece to ...Gorge Mastromas. And perhaps, in passing, we might observe that it is in this that we maybe observe the crucial difference between the way the Germans and English think about theatre – in short, ...Gorge Mastromas is a New Play which carefully and very cleverly critiques and questions some of the fundamental core problems that the writer has with the ideology of late-capitalism. The Fountainhead, and Capitalista, Baby! by extension, and by contrast, is effectively a gospel of that late-capitalist philosophy and this production doesn’t shy away from putting a lot of that philosophy on stage for the audience to wrestle with.

I’ve always avoided actually reading the novel. My reasoning being: a) it’s very long, and b) why on earth would I want to? Why would anyone want to spend time in the open sewer that is Rand’s mind? What possible use is a novel written largely to demonstrate the principles of Rand’s “objectivist” “philosophy” that everyone should be purely selfish, that altruism is evil, and that every meaningful advance made by humanity has been due to one individual or another acting purely for themselves?

So, the first surprise is there are slight nuances within this philosophy. The story of The Fountainhead/Capitalista, Baby! concerns the apparently brilliant young architect Howard Roark, who embodies Rand’s admiration for strong, silent men who flatly refuse to compromise. It basically charts his career as he repeatedly refuses to compromise and keeps losing jobs because of it. (To say that at some point I started to rather identify with his stubborn and catastrophic self-sabotaging is more worrying than I can explain). He is surrounded by a coterie of characters that Rand plainly despises and into whose mouths she alternately puts grotesquely craven sentiments about compromise and ugly anti-heroic things calculated to make right-thinking Americans feel sick to their cores. The surprise in all this is that, contrary to the Capitalism with which Rand is so strongly identified, Roark actually does nothing based on the profit-motive. He doesn’t care about money. He is shown repeatedly taking manual-labouring jobs in preference to compromising his ideals about architecture.

The second surprise about the narrative is the extent to which Rand actually seems quite good at understanding certain aspects of humanity quite accurately. Ok, there’s a lot of preposterously rapey sex, and her heroine Dominique Francon’s self-described sexual persona is problematic to say the least, but elsewhere, in common with all great propagandists and liars, Rand is sufficiently adroit at finding little kernels of truth from which her theories can atrophy that we have to work harder at dismissing them than you might imagine.

What’s strangest and perhaps most disarming about The Fountainhead is the extent to which it sells us the idea of art as an end unto itself, and the fact that this is the thing which should not be compromised. It is very funny, however, that Roark is just someone who has fatally misunderstood what an architect’s job is. People using his buildings at all seems to be a problem for Roark. This is not genius architectural thinking; essentially, the poor guy is a sculptor in the wrong profession.

The production is bigger than just a straight retelling of the narrative, though. It opened on 9/11 2011, a decade on from, well, you know. And it begins with the famous quote from The Fountainhead: “I would give the greatest sunset in the world for one sight of New York's skyline. Particularly when one can't see the details. Just the shapes. The shapes and the thought that made them. The sky over New York and the will of man made visible. What other religion do we need?” Which, especially with the 9/11 connection – another searing example of the will of men made horrifyingly, violently visible – opens a whole new resonance.

Jo Schramm’s set is essentially an enormous gold dollar sign set at a 60° rake. Under it, are housed cutaway (naturalistic, almost!) rooms, and the central plank running through the centre rises and lowers to create new, jagged promontories for the cast to stand on. The cast themselves are also worthy of much praise. Daniel Hoevels as Roark is especially excellent, looking like a cross between Arthur Darvil and Bryan Dick, he makes an excellent job of making every “heroic” statement and gesture incredibly funny, with just the right amount of telegraphed irony and kitsch-ing up. Similarly, Natali Seelig – possibly even deliberately chosen partly for her complexion which makes her blonde forties wig the most obvious wig *ever* – makes a fine job of heaving and sighing as an archetypal film noir-style heroine. With intimacy issues.

It also includes an actor (male) dressed as Rand herself occasionally hobbling on – is it just me that Rand reminds of Rosa Klebb from From Russia With Love? – and delivering some very Žižek-style meta-commentary on Rand’s philosophy, suggesting that she radically over-identifies with capitalism to such an extent that she subversively undermines it.

What is fascinating about this is the extent to which Rand also appears to despise the America of 1943 in which she wrote The Fountainhead for not being more properly, brutally individualistic and capitalist. She despairs of the “socialism” and “altruism” she sees all around her. Of course, this period detail is all the more fascinating for the demonstrable influence her “philosophy” is argued to have had on the country since (most interestingly, recently, by Adam Curtis in All Watched Over By Machines of Loving Grace). Would she, we wonder, recognise this America she so disparaged then, and appreciate the one built partly after her own image which has replaced it? It is impossible to say, although it’s worth noting that her radical atheism – almost a hatred of God as much as religion – would set her pretty much at odds with those Tea-Partiers and the religious right who now constitute such the main threat to America’s stability as a functioning democracy.

There is also the extra dimension of watching Rand’s words played out in German, in Germany. Because of the way we’re raised in the anglophone West, perhaps our first impression of the German language comes from watching newsreel footage of Hitler’s speeches. You cannot sit in a theatre in Berlin and forget the history. That Rand was a refugee from Soviet Russia, and writing at the time of the struggle against Nazi facism in Europe, all her arguments against both socialism, cooperation between men and the subordination of the individual will clatter and echo back and forth between positions that try to paint both factions of exemplars of each. In a way, perhaps the greatest achievement of Rand’s rhetoric is that it makes a word-salad of meaning. Ultimately both right- and left- fall foul of her insistence on everyone being out solely for themselves, which makes fascism as impossible as socialism.

Of course, she still argues like a sixth-former in a debate who has been backed into a logical corner and decides to just roll with it to the furthest possible extreme. As Capitalista, Baby! makes clear, Rand’s ideological manifesto is so riddled with logical flaws, that a child could point them out. That they are enormously popular and influential is the main point of interest here. And, in such a watchable staging, this is an excellent way of examining them at arms length, in the likeable, warm embrace of a crowd. 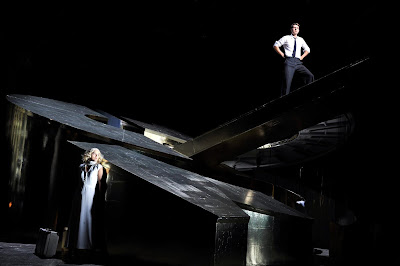 (photos by Arno Declair. Many more here)
Posted by Andrew Haydon at 15:52