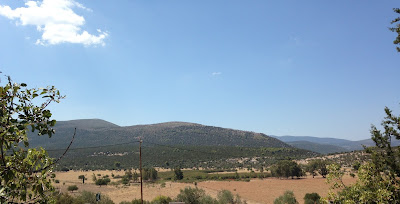 Ok. There’s basically no point in me just trying to review Lithuanian Cezaris Graužinis’s new production of Aeschylus’s Seven Against Thebes with/for the State Theatre of Northern Greece in isolation. It doesn’t exist in isolation. I don’t think I’ve ever been to a theatre that is more nakedly a part of everything around it, and you just can’t ignore that.

The Ancient Theatre of Epidavros is approximately 2,400+ years old. Cut, by the ancient Greeks, into the side of a mountain, and apparently, according to recent archaeological finds, a part of a larger complex including the world’s oldest discovered hospital/health spa.

The 2hr journey from Athens to Epidavros takes you past an almost dizzying number of places famous from ancient history, ancient myth, ancient theatre. There in the bay, is the island on which the Persian commander Xerxes based himself to command the Battle of Salamis. The imagined aftermath of the Persian defeat in this battle forms the basis of Aeschylus’s The Persians. It can also be (dubiously) claimed as the beginning of “Western”, “European” civilisation. Over there is the mountain on which the child Oedipus was said to have been staked out and left to die. Here is the turning in the road toward Corinth. Over those mountains is where Thebes is thought to have stood. And then, further, here is the tiny village of New Epidauros where the first Greek constitution was signed in 1822, and in front of the building, another amphitheatre.

And then there’s the landscape and the climate itself. I realise I’m not the first person to have ever gone to Greece, but I’ve never really heard anyone talk about the climate or the landscape. It is hot. Incredibly hot. The sort of heat that stops you thinking. The sort of heat your body can’t really resist, but has to somehow give in to. The ground looks baked and bleached by the sun too. The earth is a kind of pale colour you just don’t see in England. And rocky. From an English perspective (an ancient, hard-wired sense of your homeland’s fertility), you’d say it looked barren, and yet there’s this profusion of hard green trees. Fig trees, olive trees, orange trees, and these light green pines. Thousands of them, stark against a sky so blue it looks hazy and bleached too.

It’s the most alien landscape I’ve ever seen (partly my fault, I’ll admit). At once, so familiar from TV, film, and picture books, and at the same time, completely unexpected. Like, sure, that’s what the pictures of it looked like, but standing in it?

And then there’s the sound, the non-stop crickets. So many crickets that you tune out this constant white noise of them.

This is all crucial backdrop for *this production*, any production at this Festival (at least, as seen by an Englishman with a reasonable classical education and next to no experience of travel to hot countries). But it’s more than that. Essentially, going to the Peloponesian peninsular is like suddenly discovering you can visit Narnia. 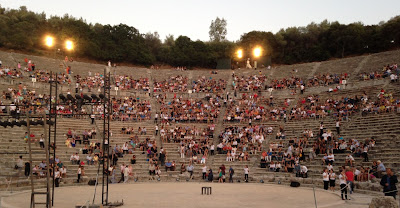 Seven Against Thebes is, in English terms, a *difficult* play.

Essentially it’s: a bit of set-up, a list of six armies led by various generals outside the gates of Thebes being reported to its ruler, Eteocles, and then the punchline that the seventh and final army outside is led by Polynices, his brother. There is a fight, and both brothers – the sons of Oedipus and his mother, Jocasta – die. There is then an epilogue (apparently added later following the success of Sophocles’s Antigone), which essential sets up the action of Antigone. I’m not sure it *ever* gets performed here (the UK). And it’ll be gazumped now (you’d hope) by Martin Crimp’s STILL unproduced-in-UK adaptation of the same story in Euripides’s Phoenician Women. Indeed, one of my main reactions, even while watching it, was wincing at the thought of what an English version would be like, even in the Olivier – an auditorium apparently inspired by Epidavros.

Part of the reason it works so well here is down to Graužinis’s superb, unfussy physical production. Without feeling laboured or like an overdone trope, the chorus inhabit the space plausibly enough like people, like Ancient Theban citizens (albeit in modern dress), but their constant, restless movement around the space has the effect of making both text and action feel real and lived, rather than stately and ancient. More than this, though, their outbursts, their acts of speech, feel urgent rather than scripted. Part of me wonders how much of this is also a language thing.

The play is being performed in translation. From ancient Greek to modern Greek. And then I’m also watching the English surtitles. But, even translation from ancient to modern Greek means that the terrible, terrible dryness of posh-English with which these plays are so often performed is completely removed. It’s completely fascinating to see an ancient tragedy played out in something like its original setting – albeit at night, under floodlights, not in the blazing heat of the modern-day Greek daytime sun – and in something at least related to the original language.

I’m resistant to national stereotyping, but it doesn’t seem reasonable to observe that, comparatively, “the English” are quite stiff and vocally reserved; even when they’re trying their best not to be. Perhaps especially so then. And, cliché though it may be, it doesn’t seem entirely stupid to link this to (among other things) England’s climate. In this Ancient theatre in Epidavros, it would seem ridiculous for the performers, for the plays, not to be somehow *elemental*, just as, in England it feels faintly odd not to be dry and ironic. What *is* fascinating, is the way that this marriage of Lithuanian and Greek seems to make perfect sense. I’m not familiar (as far as I know) with any of Graužinis’s other work, but this sense of *The Elemental* is also common to the work of Lithuania’s perhaps most famous (or joint most famous director) Eimuntas Nekrosius. (If I were going to pursue this climate-as-temperament-destiny thing to its logical conclusion, I might note that Lithuania gets jolly cold in the winter, but...) But, yes, it’s interesting how well-matched the two theatre cultures seem to be.

Another thing that fascinated me was the legendary acoustics of the Ancient Theatre. They really are remarkable. Nothing was miked, and yet, you could hear a guy just rubbing his hands together on the stage from halfway back in the auditorium. Is this the case for the Olivier? (And, if so, why do so many actors in there shout so much?) It feels like maybe roofs are the problem? (Although I know from plenty of other places that this isn’t the case.) But, yes; remarkable.

And, yes, in this setting, running for 90 minutes, the drama itself was hugely, hugely watchable. I *think* it would have worked, even in a decent indoor theatre, á la that Slovenian Iliad. The scenography (Motley-trained Kenny MacLellan) is spare and subtle – a bare doorway, a pair of ladders, and a pile of old armour from across history – but somehow, I can’t help feeling that almost everything not ruthlessly dependent on a building having a ceiling would be better seen in this auditorium. Hell, it even makes the Globe look fussy.

I was also surprised that I even found the piece moving. I did also look, as if my wont, for contemporary resonances, but nothing really chimed with my Brexit-laden preoccupations. It’s not a completely alien story. Wars happen, civil wars happen, but this didn’t appear to be being used as a commentary on any specific ones. More as an exploration of this sort of conflict and ethical questioning that it engenders. Perhaps the fatalism of the original story is part of what holds up its procession to the modern world, but stripped deferrals to the Gods, I can almost even imagine it being used as the post-Brexit play of choice – two rulers who should be on the same side achiving mutual destruction in a battle that should never have even been fought? I can think of less relevant stories... 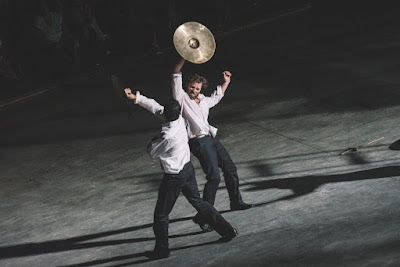 So, yes, this first encounter with Greek tragedy in its proper setting genuinely shocked and threw me. And made me re-think everything (which isn’t a huge amount, I’ll admit) I’d ever thought about classical Greek drama. I was *incredibly grateful* that I’d finished my chapter on Katie Mitchell’s productions of Greek plays before I’d seen Epidavros, because it feels to me like this new information is going to take some assimilating. It interests me, though, thinking back, that Mitchell’s early Greek productions must have been far more closely influenced by the originals, and by this landscape, and gradually moved away, into the discovery of her current, modern, Northern European idiom. And I wonder, if theatremakers/directors/dramaturgs who arrive at the classics, first by Mitchell’s current productions, will have to claw their own way back to the Ancient Greek landscape to rediscover the plays properly for themselves.

Mitchell’s productions (for example, but also Rob Icke’s Oresteia), make perfect, perfect sense as a way of presenting the plays in England (and as being about England/for the English/anglophone world). And, there’s the difficulty – because of our climate, and our theatre architecture (and our national terperament?) – that we can’t simply try to recreate “original practice” in England. But I might predict that a return to experiencing and trying to recreate/reimagine these conditions for our stages, might be the next movement in the cycle of English productions of the Greeks. Although *how* you effectively communicate this heat, this climate, this landscape, the endless crickets, without just being trite and literal (here a painted backdrop, there a tape of crickets playing in the background) is for someone with a brilliant theatre-brain to show us, and certainly not for this critic to dictate.

But, what a stunning first encounter with a country and a culture. Astonishing stuff.