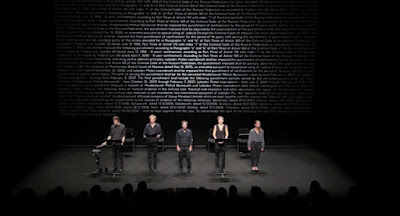 Ok. So Baltoscandal 2016 turns out to be a bumper year for Seeing Great Things. As an analysis this is liable to get tiresome Very Quickly for you, dear reader. Suffice it to say, Suite N°2 is stunning. Absolutely stunning. Please. Someone. Transfer. Suite N°2. You will make your money back, I promise. It is must-see virtuosic stuff. Truly.

What Suite N°2 is, is essentially a five-person live performance of falling down a YouTube rabbit-hole. It opens with the introduction to a 1997 World Championship boxing match, and from their seems to circle the world*, catching and replaying an astonishing array of speech acts. Everything from George W. Bush’s announcement of the invasion of Iraq to the American people, to a sermon in Kinshasa; from a Portuguese Finance Minister’s 2012 economic statement to a Japanese management training speech.

Performed on a stark black stage – performers also wearing muted, concert-soloist black – with a projected black backdrop within which the surtitles appear, perhaps the first thing that we notice is the way that the text is being performed, as if as music. On occasions, the five performers all converge in the same piece of text, speaking – or sometimes even singing – the words in chorus.

The second thing we notice is just the sheer vocal skill here. Dozens of languages are delivered, with near-perfect precision – I (naturally) wondered if they were just fudging the detail slightly, but when one of the performers does a 2010 speech by a young British student involved in the education protests of that year, his accent is spot on. This is essentially verbatim theatre, almost weaponised and “art-ised” to the nth degree. The level of complexity and sheer skill in the performances here is something else.

And then there’s the text itself. No, you never really get over the fact of the performances, but there is a real compelling picture of the world* painted here.

*I’ve now twice asterisked “the world” now, and it needs to be admitted that this is a picture of the world taken from mainland Europe. The production has been made by French artist Joris Lacoste with the company Encyclopédie De La Parole, and this snapshot of the world they offer in 90 minutes is necessarily selective. As such, Asia, Australia, Africa and South America maybe only get one or two entries each, while various European *countries* get roughly the same. And then the United States of America dominates everything. It’s worth noting as well that all the performers are white Europeans. But then, we are in a country which is 99.1% white**.

Nevertheless, thanks to some excellent dramaturgy, it felt like a comprehensive enough picture of how we (white people in Europe) see the world and perhaps all the fuller for essentially underlining the biases of Western/European media. The amount we are saturated with statements, news, ideology, economics, and even wars from America felt especially prevalent. [And horribly topical, given that I saw this the day the Chilcott report was published.] Elsewhere, we hear a radio station narrating a Wall Street stock market crash in 2010 in real time. We hear the last messages between air traffic control and a plane that suddenly stops transmitting. We hear a relaxation meditation from YouTube. We hear a black American who has been stopped by armed police for no apparent reason; we do not know why that tape cuts out when it does, but we can guess. We hear a woman in Bogata in hysterics at a phone company who cannot seem to reconnect her wi-fi. We get how all these things are connected and not connected. We get how “the only difference between before and now it that now there are cameras” (or other sources of recorded sound, in the case of this piece...) We, perhaps crucially, don’t hear much from China, Cuba, North Korea or Venezuela, for example.

The emotional effect of the whole is quite strange. Bush’s Iraq speech, now with hindsight highlighting the sheer absolute wrongness of every claim to be making the world a safer place, is almost impossible to listen to. As is the performance of the tape of the black American man about to be shot. All the more so for having read the news just before the show. And from knowing that neither those incidents, nor the one in the show, are isolated. And at the same time, thinking of the extra-judicial murders (and “accidents”) carried out by the American military outside America’s borders.

Given the current state of British politics, it’s the speech by a student in 2010 promising that there will be more resistance to the government’s austerity plans that is most personally resonant. (Obviously this is subjective. It’s a great speech, and rousing, but I’m not sure it’ll mean as much, especially contextually, to anyone outside the UK.) It comes at a climactic moment in the piece, deliberately, I think, and resonates beautifully with the other material, about the need for resistance. But it’s from 2010, and we all know the coda – six years of austerity and now a successful Brexit campaign apparently orchestrated and led by a resurgent far-right nationalist tendency, and the stepping up in a campaign of street violence.

And, yet, even though, in writing this review two days on, amidst the turmoil of news reports from Britain and America especially of the world tearing itself apart (and how vain, to even think that this is bad, compared to the ongoing comflicts in Syria and Iraq and Sudan and Palestine and etc.) it’s easy to make it sound like this is a dispiriting and depressing piece; in fact, somehow, perhaps due to the talent and brilliance on display too, it somehow manages to be completely energising and hopeful.

So, yes, to reiterate: please everyone in UK – transfer Suite N°2

** https://en.wikipedia.org/wiki/Demographics_of_Estonia (and we still managed to have a racist cab driver from the airport, complaining about the EU and immigration) 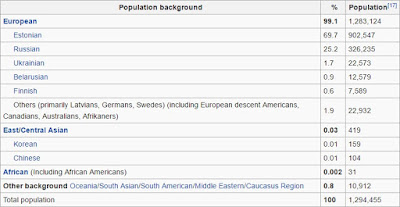