We Are Still Watching – Proovisaal, Rakvere 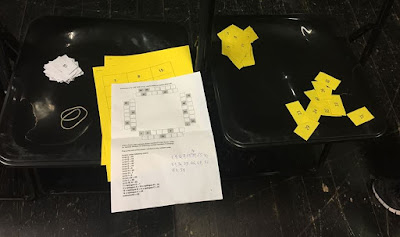 Ivana Müller’s While We Were Holding It Together was one of the highlights of Baltoscandal 2008, and indeed it’s a piece I *still* talk about (but which, criminally, I never got around to writing about), so I was thrilled (and a bit nervous) that the follow-up was at Baltoscandal 2016.

While While/Together was a pretty abstract piece of work (five performers held themselves in exactly the same position for an hour while saying lines which may or may not have reflected on their position), it at least had performers. In We/Watching, the audience are the performers. Which, generally speaking, I absolutely loathe. I hate reading in public, I hate performing, and I’m not even over-keen on having to watch anyone else do it.

Mercifully, both the set-up of We/Watching, and the particular group of 40 I happened to see it/perform it with, are exemplary. The piece itself immediately makes a virtue of our irritation, embarrassment and grudging complicity. The scripts are distributed in such a way that no one is overly burdened, and they are passed on with the possibility of demurral, relatively regularly. At this Estonian international festival it was performed twice in English – pretty much the default second language of almost every international festival I’ve ever been to, thanks to American imperialism – and once in Estonian. As such, it felt particularly churlish to mind reading some bits out in my mother tongue.

There’s also the thing, that the piece almost benefits from being performed by an international audience, mostly working in their second language. There’s a hesitancy and non-acting-ness that actually allows the lines to resonate much better than when native speakers read them – coupled with the fact that we’re not reduced to being a roomful of people silently assessing a judging one another’s class backgrounds and regional backgrounds as we would be in UK. But all this is peripheral detail (mixed with some subconscious stuff about how much I hate England at the moment).

So, what happens in We Are Still Watching? Well, maybe the title is a good place to start. It’s interesting; like The Author is interesting, in that we’re arranged here into an in-the-round audience, two rows deep, but that nothing ever happens in the middle. The title seems to refer to this – that we are still watching *something* in this space, even though it’s a combination of staring at the floorboards, looking at other audience members, and maybe looking at the person reading, if they’re not sitting two people down from you and essentially invisible. It’s fascinating to me that Müller is a choreographer(!) and has created this piece. It’s interesting to think of it in terms of ‘a movement piece’/‘choreography’ rather than as ‘theatre’.

The things we read out are mostly discussions of our situation. The paradox of people performing – scripted – resistance to the script is gently explored. The whole tone of the piece (although I’m sure this is more performance dependent than I recognised at the time) feels both gentle but also direct. The Big (if peripheral-to-this-performance) Contemporary Questions feel like they’re addressed, albeit side-on, with special reference to the peculiar relationship of the audience to this performance. Perhaps inevitably for me, Britain’s teetering social fabric and forthcoming divorce from first Europe and then reality loomed large. The sort of gentle, careful, humane response to thinking about life that this piece represents has certainly been lacking in the Big Bold Statements of UK Politics of late. That said, the finale (it has a finale!) also suggests an interest in the paradox of collective action versus Fascist mass control (i.e. they’re pretty much indistinguishable, and that’s hard...).

I wish I had a copy of the script so that I could re-read it and quote specifics and talk in a detailed way about the actual, textual journey that it takes its audience/participants on, but because at the time of seeing/doing/experiencing the show you’re all *inside* it, that kind of dispassionate analysis feels impossible on one viewing. (At least, impossible for me; I’m sure other critics would manage), but all I’ve got is this bundle of impressions and feelings. And it doesn’t feel like a bad way to be at all. It felt like a joyous thing to have been a part of. It did manufacture a strange little bond within our group, and made the world feel that bit friendlier and more thought-about than hitherto. No bad thing at all, last week, when – from all available evidence on social media – my homeland seemed intent on self-destruction.

Throughout Baltoscandal it felt like that programming was testing the faultlines between the false consolations of affirmative art, and the potential for deepening depression of analysis. It was a brilliantly put-together schedule. Irrespective of the order in which the pieces were viewed, the collective weight seemed to offer the best possible cross-section of almost “contradictory” forms and genres of work that could be collected under the banner of “theatre”, and some of the sharpest political content I’ve seen in performance.

We Are Still Watching, as the title suggests, can be taken as a positive and a negative. The idea of eternal vigilance opposed with *only* watching, bystanding, not getting involved. It feels like as pertinent a view on present-day Europe as any: “still watching” being both absolutely necessary and never enough.