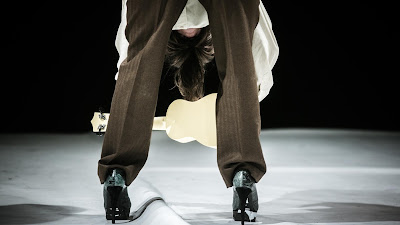 [Ok, so, I saw The Charm of the Burnt Fields in the evening of the day we travelled to Estonia (3.30am waking time, about four hours sleep, and not much more on RyanAir or the coach from Tallinn to Rakvere). I’m not complaining at all, but I think it’s only fair that my physical state be taken as a mitigating factor in how I watched/found Charm of the Burnt Fields...]

Charm of the Burnt Fields is (I think) narrative choreography. It’s not *quite* as linear or clear a narrative as ballet tends to be, but it feels like its on its way. Or, if not narrative, then sketch-choreography. Imagine if Smack the Pony was a dance show (but with consistent characters)?

Young auteur Renate Keerd credits herself here as author, director, designer, musical designer and 50% of the lighting designers. It is not unfair to say that she could have done with an outside eye at some stage. I’m all for a rigorously pursued artistic vision, but equally, it’s possible to get lost inside your own work sometimes, and not be able to see when some darlings need killing. The piece runs at a superfluous 80 minutes when it could be a blistering 55.

The piece is maybe *about gender*? I mean, it could be about lots of things, but it’s got the three performers (Liisa Tetsmann, Taavi Rei, Gerda-Anette Allikas – 2W, 1M) first dressing in high heels, bras and short shirts and running round in circles, and then later putting on trousers and getting into a fight; and, well, if that isn’t the essentials of gender binaries, what is? In between there’s a ukulele-and-triangle cover of Queen and Bowie’s ‘Under Pressure’, where the performers have their long hair tied in pony tails over their mouths. It starts off with two of the performers wearing traditional Zimbabwean wooden masks spearing the other performer from a boat they’re pretending to sit in; it ends with the same two performers wiping shaving foam off each other’s naked, silhouetted bodies, while their mate who was the fish turns up under a carpet, so they can all get under it and get dressed before the dance-off finale. There’s a lovely candle-based back wall.

I’m not fully sure what the piece *actually says* about gender, or owt else, really. There’s a generalised sense of life cycles, perhaps, and of human evolution, and the evolving of reactionary gender roles, maybe? Because there are three performers, it also feels like there’s a continual sense of one person being excluded from a hetero-normative couple, but maybe I just imagined that – there’s plenty of time where they’re also all chucking each other around and standing on each others’ backs in high heels. And it’s worth saying that at its best the dancing is superbly executed, making violent acrobatics look effortless, and with wittily choreographed “fight scene” that every fight director in UK needs to see post-haste.

It maybe took me half an hour for my cynicism to fully melt, but once gone, it was clear that this is a nicely made piece, open to almost infinite interpretation, boasting some exemplary movement skills.

The Baltoscandal programme offers this remarkable excerpt from Katrin Maimik, Andres Maimik review of the show in Eesti Ekspress, which I’ll just leave here for balance(?):

“The production provides the viewer with a chance to kick over their brimming bucket of inner shit, to cast off the burden that has weighed down their soul - their position, their obligations, the inevitability of life, the anxiety of language, the dishes piling up in the dishwasher, dead-end thoughts, the birthday of the mother-in-law. And tear off their clothes and get down to their underwear, and rampage, roar, wallow, ram, pound, leave behind the stupid thoughts and poisonous emotional fumes circulating in their systems and escape into pure bodily ecstasy. And then, having exhausted themselves and cleansed themselves at of the altar of love, they can go back to their homes with grey walls and white ceilings, switch on the dishwasher and lie down next to their spouses, without soaking their pillows with longing.”