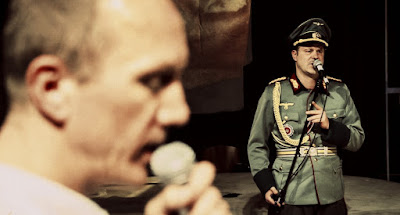 Right. This review is going to involve a lot of trust. First you’ll have to trust that I’m not some sort of a Nazi, and that, yes, *of course* I take the crimes of the Third Reich seriously. Second, you also have to trust that my instincts are absolutely spot-on (which, as always, they are.) So, with all that in mind, I can tell you that Germany’s ‘Showcase Beat Le Mot’’s NaziSuperPeople Are Better Than You All – The Horror of The Ordinary is an incredibly funny 150 minute show about time-travelling Nazis.

The piece is playing in a venue simply known as “Barn”. The reasons for this name become perfectly apparent when you see the venue; it is indeed just a barn. The night I saw it the weather in Rakvere was unseasonably foul, and so the venue was accessed by a 100 yard walk across a muddy field, in the driving rain, in the dark. All of which was a perfect set-up for this post-everything piece.

The performance style is, what? “Shambolic”? “Inert”? “Laid-back to the point of horizonal”? It’s hard to say. None of that is meant as a criticism. It’s a very definite, and unexpectedly compelling/relaxing performance style. Indeed, if this piece had been made with “proper” acting, it would have been completely unbearable. Instead, the atmosphere most closely resembles something like a ramshackle wedding party, and the performances something more like a mate telling you a ridiculous story in the pub.

I would say the “narrative” owes most to maybe The Goon Show or perhaps Mighty Boosh if I thought either thing were a likely reference point for this five-strong performance group who trained at Giessen University (home of Hans-Theis Lehmann and Rimini Protokoll among others). The inclusion of Sharon Smith off of Gob Squad’s recorded voice as “She-Wolf Sharon of the SS” maybe points toward some affinities with the Volksbühne-based performance group, and the tone of Northern camp reminds me repeatedly of David Hoyle. But really it’s completely its own idiosyncratic thing.

So, on one level, it’s just silly, straight-faced camp fun*: our SuperNazi time-travellers go back in time to visit Caesar, Christ, the neanderthals, King Arthur, and so on, setting up the essential components of Nazism throughout history at the behest of Alfred Hitler, before returning to their own time, only to discover they’ve changed history and have to kill Adolf Hitler because he’s evil.

In a way – although you’d have to excavate pretty hard to get there – the piece is a knockabout illustration of Adorno’s point that the Enlightenment laid the foundations of Auschwitz. Indeed, the company’s blurb is adapted from Walter Benjamin’s The Destructive Character. Indeed, the more you think about the piece, the more you appreciate that the jokes are partially just window-dressing for a serious point worth making repeatedly. I wonder if the use of humour is also a partial reference to Freud. Whether perhaps exposing our desire to laugh is a device to make us think more carefully after the event about why we might want to do so.

On the other hand, the bits with Jesus especially are very funny indeed:

Nazi: Why are you so popular with the people?

Christ: Because of my magic tricks...

[Christ performs conjuring version of the Eucharist, pulling wafers from out of thin air and magicking up red wine, which is then distributed to the audience]

The Nazis then find Christ buried in his cave and revive him in their time machine, thereby effecting the resurrection... Etc.

So, yes. Blimey. Is this a review yet? I dunno. The show was good. I liked it. I think you could claim that it also had a serious intent. It didn’t actually “make light of” the actual Nazis. Instead, perhaps most usefully in Estonia, it maybe forces them to recognise their own difficult Nazi-as-anti-Soviet past. But in the current climate, with far-right on the rise once more, in Europe and the middle-East, perhaps just taking the piss out of the idea is no bad thing.

There’s perhaps an interesting coda about whether this show could exist in the UK. I think it *probably* could. Certainly in Edinburgh, but almost certainly not in an ACE-sponsored International Festival like LIFT. And, even though it’s also a thing that the Far-Right also say, maybe that is down to a climate of “fear-of-offending” on the cosmopolitan left, that puts them in the ludicrous position of actually being incapable of taking the piss out the Nazis. On the other hand, that very attitude is pretty much my own default position. Which is interesting to me. 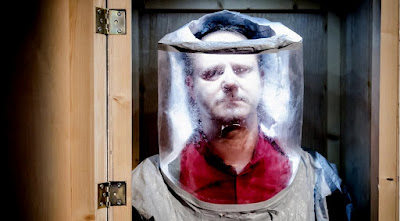