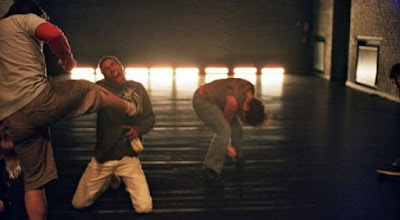 If I’ve understood it correctly, part of the argument of Paul Mason’s Postcapitalism is: in the invention of the internet, capitalism’s unstoppable force has met its immovable object. Capitalism, with its apparently infinite ability to adapt and absorb everything else into itself (if in doubt, go buy a copy of Das Kapital or Urban Guerilla Concept on Amazon), has apparently created the world’s most popular, successful medium, and essentially it can’t be monetised.

Belgian choreographer Andros Zins-Browne’s Limewire* (this v.3 made with Estonian dance students specially for the festival) is a piece of contemporary dance that explores perhaps the cultural fall-out of online culture. Specifically, it asks: “Youth movements, counter-cultural and sub-cultural movements have always embodied a spirit of Against. In these social, political, and cultural movements, bodies of collision, reaction, and volatility have always been characteristic. In a choreography made from practices of networks and peer-to-peer file-sharing programs, Limewire* questions the spirit of Against when the strongest counter-cultural tool becomes the ability to copy. What is the status of this youth movement that disseminates authentic and inauthentic alike; which corrupts or bugs, but never dies, which never creates anew but proliferates a ‘mass movement’ only by reproducing and reassembling itself?”

It’s a fascinating question for a dance piece (for any piece), even if you’d maybe want to see its premises questioned a little more rigorously. Like: *is* file-sharing the movement itself? (I guess with something like the Pirate Party, it sort of is a bit, but...) For me, Limewire feels more like an interrogation of the very foundational problems of this way of seeing “youth movements” as “against”. Or, perhaps, the difficulties of their “against”ness never having really been satisfactorily formulated into a programme of demands and actions. (And, indeed, the necessarily transitory nature of “Party” membership for any *Youth* movement – I mean, theoretically, once you’re not young, you can’t still be a member of a youth movement, can you?) This is, I think, a simple problem of the programme notes, though. I think, at least in this version of the piece, it misunderstands Music Genre Tribalism as a Youth Movement in and of itself. Actually, I think there’s possibly more to be said for the idea that one might sign up for n number of musical tribes when young, but you maybe then carry those along with you even unto death (Once a post-punk, always a post-punk, kinda thing).

So, the piece. What happens? Well, there are about ten student dancers on the stage. Dressed in satisfyingly various colours, mostly in t-shirt and jeans. And Nirvana’s ‘Smells Like Teen Spirit’ plays. And they dance to it; violently, appropriately. The song comes to the end. And then starts again. They dance again. This time, fractures in their approaches to dancing to it becoming more and more apparent. Is there a game of follow-my-leader here, where one performer will move a certain way and then others copy them? Are the moments where the whole group have been primed to re-sync; pogoing in time to chorus? (Yes, clearly.) And what does it all amount to? The second run-through of the song was mixed to last longer, and eventually faded out into a tinny transistor radio sound playing out of only one speaker at the back of the hall, and eventually into silence. The dancers kept dancing; trying out – discovering – new rhythms, new dances, new routines.

Here, it felt like there was a disjucture between stated area-of-interest (P2P sharing, MP3 downloads) and what was happening. Instead of feeling like an inquiry into that phenomenon, it felt instead like a culture being obliterated by the boot of Nirvana stamping on the face of the music industry forever. It doesn’t feel like either Nirvana or The Kidz are to blame for this, but then, it also doesn’t feel particularly new or relevant to UK music consumption. It’s worth bearing in mind that Estonia’s formally recognised independence from the Soviet Union almost exactly the same time as ‘Smells Like Teen Spirit’ was released. What maybe felt to me like a particular chapter in UK/US musical relations (the streamrollering of shoegazing under the onslaught or grunge, pre-Britpop...) maybe feels very different here. The lack of a Beyonce routine in the piece felt, to me, like a real missed opportunity, but then I’m not sure whether Estonia even has a relationship with her music. But, yes, all fascinating stuff.

As with much dance, it struck me that this was a perfect medium for exploring these ideas of youth movements (no pun intended, at least not by me); being able to visually appreciate the ripples of ideas and changes of direction passing between actual bodies in space and time. The space it creates for directed meditation of specific themes felt well-managed and practical. This – for me – felt like exciting, almost futuristic work. Not a “perfect” realisation of the future, but 40 valuable minutes for thinking about it, watching something clearly packed with ideas.