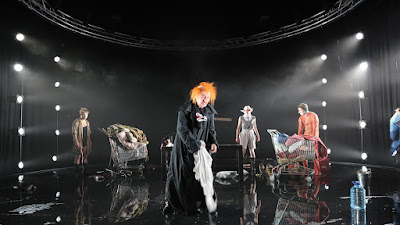 Back in those old days, there was once a play called Three Kingdoms and it was written by Simon Stephens, directed by Sebastian Nübling, and designed by Ene-Liis Semper. And it was a joint production between Munich, London and the Tallinn-based Estonian company NO99.

I’d somehow contrived to miss NO99’s NO88: Hot Estonian Guys in Wiesbaden in 2008, so this is the first non-Nübling show of theirs I’ve seen, and it’s directed (and presumably devised) by Ene-Liis Semper. (The company will make 99 productions and then stop. Obviously they’ve already made loads, and it’s hardly *expertise* to come in after 57 shows and mention the one co-pro you’ve seen...)

Anyway, well, I don’t mind saying that I absolutely loathed huge chunks of this. Well over 50%, I reckon. Weirdly, however, by the end, I kind of loved it. All the more powerfully so for having hated so much of it...

The style of this piece is a kind of deconstructed dark clown show, which, through a series of knockabout routines, gradually gathers force as a kind of narrative. I think. After an agonisingly slow start, it seems to kick off with an extended allegorical skit on the Biblical Garden of Eden story. I mean, the start really was agonising. Maybe ten minutes (felt like twenty) of the seven performers dragging themselves and various heavy props around the outside of the slowly revolving circular stage. If you want a rough visual shorthand, imagine someone had made Frank Castorf do Mother Courage. (Or, if you want a more readily available one, imagine devised theatre made by students who had spent too much time mainlining everything at St Stephens in the early 00s. Basically, think: trashy costumes and failed spangle.)

Once the routines kick off, it feels like; Oh, right, ok, story! And, being English, I perked up again for a bit. [That cliché about the English/British theatregoing mind being addicted to narrative still holds absolutely true, no matter where I take myself or try to shift it.] The stories being told – in dark clown-routine form – seem like a scattergun collection of Biblical and maybe off-beam Just So Stories – one “How The Bloke Got His External Testicles” is particularly grim. There’s a bit of gurning and squeaking but mostly concrete action, not so much playful as dogged. Now, I spent quite a lot of time trying to thread the stories together; from the Garden of Eden to something starting off like Jacob and Isaac, there seemed to be a definite God figure, and the presence of a massive wooden cross revolving round the stage like everyone else, lending proceedings a definite churchy feel. Philosophically, aesthetically, and perhaps even theologically, El Dorado... is definitely not within my comfort zone. It is pagan and Catholic where my tastes tend to be modernist and protestant; minimalist rather than abundant and decadent. And there’s the fact that the company seem to be *trying* to make the piece a hard watch. (And, y’know, succeeding admirably. Well done, guys, it was a Really Hard Watch.) And for a long time (show length: 2hrs) you resent that. Obviously. I still haven’t come up with a strategy for what to do with shows that deliberately want you to suffer. Other than succumbing to the intended suffering. And, well, then you’re suffering, and (perhaps counter-intuitively, given the protestantism) you’d rather be enjoying yourself. [Perhaps culturally this is the root of Britain’s problems; the belief that fun is no kind of art, but that no fun is, well, no fun.] ANYWAY...

So here we are, watching the grimness and the gurning, and this depiction of a squalid cruel world – one female character seems to have her mouth permanently held open by some sort of device, and is constantly getting pregnant, “giving birth” and then having her cushion-baby taken off her and bashed to death with a frying pan – and it just feels unrewarding and relentless.

Then there are a couple of gear shifts. It starts to rain around the stage (cliché, sure, but still visually effective when done right, as it is here) and just this simple fact seems to focus the stage picture, lending it a visual coherence and weight previously lacking. That everything quickly becomes waterlogged, lending all the absorbent props and costumes actual weight, may even be significant. It feels like the piece could have ended here (the latter part of the piece feels like it has about half a dozen such false/potential endings) and it would have felt like it got *somewhere*, but actually, where it goes next somehow forces a reevaluation of everything that went before. The central God/Clown figure is dying. “He” lies back on his table/mortuary slab, and His chief acolyte seems to be crouching over him, perhaps pissing or defecating. And then the hitherto unexplained giant circus tent-style ceiling (ok, it didn’t need much of an explanation to just hang there, tbf) suddenly, unexpectedly opens. Hundreds of golden ball-pool balls rain from the ceiling, and suddenly you have this stark contrast with this life lived to excess in an impoverished world. The episode of a golden egg-laying goose (well, person, here), slaughtered to discover the eggs inside it, is suddenly rendered even more pointless and squalid. The irony that now the stage is littered in golden eggs when previously one had led to murder and madness seems somehow incredibly profound. And the God-clown also has a remarkable speech (from something?). Suddenly he’s Baal, Colonel Kurtz, the Marquis de Sade... The evil and excess somehow reconfigured as heroic. And it feels almost cathartic. Heavy and poisonous too, but somehow cleansing. And, well, blimey, you don’t see something like that every day. So, yes, ultimately – for me – remarkable. Obviously there’s no answer to the question of how you make something like that more “palatable”, and suddenly you really don’t want to know, and feel stupid for wondering. It is what it is, and, in the end, it pulls back the entire room. Yes, it’s tried your patience, and been horrible and boring, but ultimately, it feels, it’s done all this in service of a total experience. A carefully managed emotional journey to enable you to feel the ending in this way (I realise I’m crediting Semper et al, with having micro-managed my subjective response, and I know that’s wrong, but at the same time, it’s an accurate reflection of how it *feels* in the moment). So, yes, remarkable. The piece is something of an outlier in the Baltoscandal programme, I think, in that it seems quite rooted in The Human, rather than The Political. And I realise I don’t tend to get very excited by plays about “People” compared to plays about “Ideas”. (Yes, I know they’re all flip-sides and interconnected, but you know what I mean. There can be emphases.)

But, yes, yet another genius bit of Festival programming, providing perhaps the Festival’s scathing human heart.
Posted by Andrew Haydon at 10:08