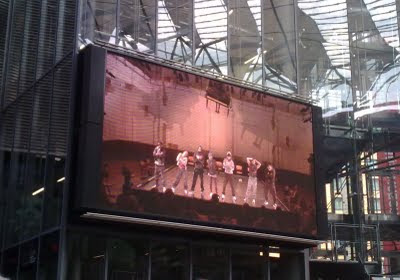 Broadly speaking, Germany, or at least Berlin, doesn't seem to go in for the social-realist problem play so much. You know, those plays that are the absolute staple of English theatre: the dinner-party conversation play; the “About” play; the “liberal angst” play. Everything from George Bernard Shaw to the work of Davids Hare and Edgar.

Verrücktes Blut looks like it's already making a significant dent in this theory. Created at the Berlin theatre Ballhaus Naunynstraße, located in the heavily Turkish-populated district of Neukölln – sort of Berlin's Arcola – it is a play about young Turks in Germany.

The first interesting, or at least unexpected, thing about Verrücktes Blut is that it isn't a piece of new writing. It's an adaptation of the recent, similarly themed French film La journée de la jupe (Skirt Day!), or as blurb has it: “Frei nach einem Motiv aus dem Film...” (roughly: freely after a motif from the film...). In both, a teacher finds a gun in one of her students' bags and takes her class hostage.

Here, the piece gets off to a rather rocky start. The first few minutes involves little more than the Turkish cast rehearsing an exaggerated Masque of the Surly Youths. Then, the gun is discovered. Nine. Minutes. In. And for a good long while after that, the production consists of the whole cast screaming and shouting at maximum tension-level. Or rather, mostly the teaching screaming and shouting and the kids looking terrified and screaming or shouting only when the gun is pointed at them.

Then comes another potential pitfall. The class the teacher is taking is on Schiller's repertory classic Die Räuber. The class in meant to be memorising large chunks and performing them (apparently, yup, that really does happen in German schools. Read and weep, British teachers), so we've now got the handy contrivance of having these Turkish youngsters having to perform large chunks of Schiller. It's practically Our Country's Good for immigrants at gunpoint (not that Our Country's Good isn't immigrants at gunpoint, but...).

The teacher menaces them for incorrect pronunciation, bullies and taunts them, and calls them “monkeys” (Affen). The strapline for the show could almost be “When you teach the word culture, reach for a gun”. All this is more than a little problematic, especially for me, a total outside observer (being neither Turkish nor German). In the first instance, the production paints a more-or-less relentlessly negative view of Turkish youngsters; it then seems to suggest that German culture is forced down the necks of these youngsters basically – now literally – at gunpoint.

The subjects of the teacher's anger are considerable. At one point she is attacking male Turkish youths' propensity for over-using the word “muschi” (pussy); at another, she forces a young Turkish girl to remove her headscarf at gunpoint.

I don't know whether this latter scene is also in the French original, but it would seem fittingly emblematic for a “debate” which is raging across Europe – whether or not to introduce headscarf bans. Here the removal of the headscarf is shown as a moment of female liberation and/or empowerment. Somehow, the fact this empowerment takes place at gunpoint seems to get lost. Which seems in keeping with the direction in which the debate seems to be going: legislating to enhance people's personal freedoms by making something people do illegal.

In fact, though, it might well be the presence of the gun which keeps the play's examination of the issues interesting. In short, while it might be a bit of a crass, or symbolically heavy-handed motif, it does have the useful effect of undermining both sides at once, while at the same time proving to be an effective tool for classroom control. But I wonder if it pushes the envelope of hopelessness a bit too far. As if to suggest that there can be only violence. That brutal control is the only option.

At the end, it has emerged that one of the group has done Quite A Bad Thing and there's a quick balloon debate about whether he gets executed or not. The pupils quote a range of leading enlightenment lights (Schiller, Goethe, Voltaire, etc.) to the teacher's amazement, pleasure and ultimate irritation. It's a bit on the heavy-handed side, like the kids are all suddenly channelling Dead Poets Society. Now, if they'd managed to make the same arguments using the Koran, then we might have been onto something, but curiously, this was a play which seemed to brook virtually no multi-culturalism at all.

By German standards the staging was deemed rather conservative. i.e. the youths wore precisely the clothes Turkish youths wear, and were played by yer actual young Turkish youths (an aside: I have no idea what the correct term is for 2nd or 3rd gen. People of Turkish extraction living in Germany. They don't seem to say “Germans” and neither do the Germans, so “Turkish” I guess it is, even though they speak German, and were born in Germany). This set up a minor problem of its own – at the end of the play, a big dramatic reveal is that the teacher also turns out to be Turkish. This does not come as a big surprise to anyone with eyes. Prior to this “big reveal”, however, there's a certain uncertainty as to whether it's a Turkish actress playing a “German” teacher, or whether it's meant to be a Turkish woman. This might be complicated further by the fact the teacher actress's hair could well have been a blonde wig, rather than dye. So, yes, it did feel as if, if they were doing “naturalism” they weren't fully on top of it.

That said, I say “by German standards” advisedly, however. After all, when was the last time a British social-realist drama had a massive grand piano hung menacingly over the stage. Much less one that periodically interrupted the action to play various antique songs of German national pride – mostly about the beauty of the nature and so on. This element of the staging also added to the problems of the message the play might or might not have been intentionally delivering. After all, this grand piano looming over them did take on an immensely powerful symbolic role. It looked a bit like they'd decided to put up a symbol for God, and that they'd decided God was probably German culture.

Of course, having been made by “Turkish people”, the play gets a lot of points for “authenticity”, and apparently the actual script here was partly devised around the motifs, or *plot*, or the film. And it does seem to hit all the current discussion points – often with an enviable lack of flinching.

Perhaps a crucial key to understanding their position is an incredibly brief moment before the play even starts where the actress playing the Turkish girl who wears a headscarf puts it on, before going on stage. At the time, I thought it was just a kind way of defending our sensibilities but I wonder now if it wasn't a way of her signalling her own opposition to the headscarf. Perhaps this is a play arguing against multi-culturalism and for enlightenment values in precisely the way that, coming from a small English town, I would argue long and hard against the German government tolerating a Small English Town community still practicing its absurd, dated, misogynist beliefs in their midst.

As a piece of theatre, it might not be the most refined at Theatertreffen, but it might well prove to be the most talked-about. 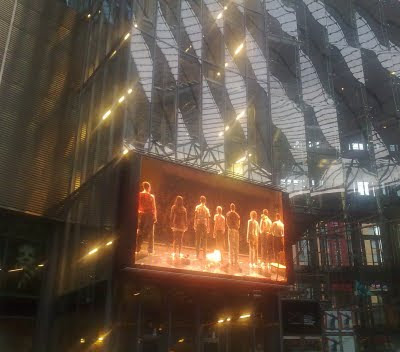 One of the songs (my footage, apologies for the slightly rough quality):

A lot of the shouting:


Couple of picutres of the screeing: 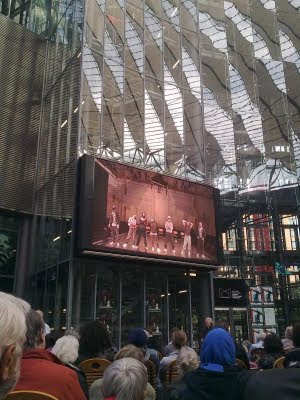 This one almost gives an impression of how many people there were, but not quite. 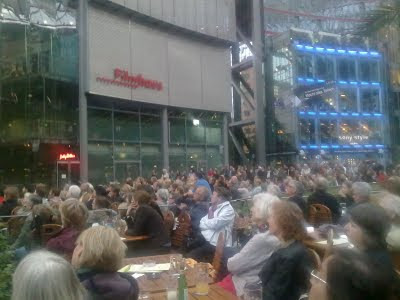