Peaches Does Herself – HAU Eins 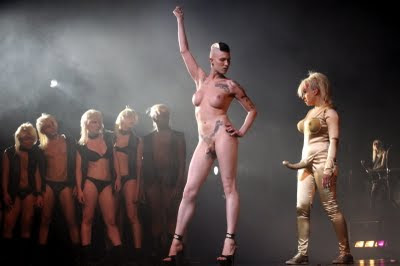 What should we expect from a show called Peaches Does Herself, created for one of Berlin's foremost centres of avant garde performance?

Surely nothing as simple as a gig, but probably not the sheer commercial suicide of Peaches just reading to us from Judith Butler and Stephen Greenblatt for three hours either. Sadly.

“Does Herself” is, of course, an amusing provocation. Playing, as it does, with the post-modern notion of the performative self and the far older idea of playing with oneself. The show starts by acknowledging its title's double meaning with an amusing faux-lecture. Alas, this only lasts about a minute before being interrupted by a drums-and-guitar-only rendition of Rock Show. This in turn is carted off (the guitarist and drummer were playing on a wheeled plinth [what is the proper word for this?]) and a first set of curtains is drawn to reveal a large bed set atop a bunch of light cubes, with a disconsolate-looking Peaches (aha, but is it really Peaches?) perched on the edge, fiddling with her small keyboard.

Cue another song, and the descent of a large vagina made from flashing lights from the flies. From behind which steps... Another Peaches! (¡) The covers of the bed are whipped off, to reveal... another large vagina. Numerous dancers clad from head to toe in pink bodystockings emerge from this. Cue lascivious cavorting on bed, the striking of many poses, and another song...

“[Peaches] has created an absurd themed Opera (there will be no dialogue besides the songs themselves) that will represent her work and her concerns about gender, beauty and age.

Peaches: 'I want it to be a fantastical musical that broadway [sic] would never be able to present.'”

And this is kind of the problem. Sure, it is unlikely that you'll find Peaches Does Herself on Broadway any time soon, but in seeking to create a show that would be unstageable in the most conservative, risk-averse environment that exists for theatre, she hasn't exactly set herself a difficult target.

The fact is, by European standards, Peaches Does Herself is rather tame. After all, shows like I Apologize get state funding and garner their creators main stage billing at Avignon. By comparison, PDH is like an I Apologize tribute, performed by the cast of Glee. For the most part it's just “a bit risqué”. There's a likeable clunky amateurishness to it all, but it's still more like the local goth club doing a kind of burlesque version of the heyday of Madonna's stageshows than anything seriously subversive.

Part of the problem is that the musical format at which Peaches is tilting turns out to be bigger than the subversive abilities of the show. As such, no matter how much irony and post-irony abounds, rather than turning the jukebox musical on its head, the jukebox musical rather tames the performer.

It's even got a story! It starts off with Peaches in her bedroom alone with her keyboard, possibly goes on to include an apparently Psychik TV/Laibach-inspired dream about a transsexual stag, and then goes on to show Peaches meeting the hermaphrodite of her dreams, being thrown over for an ageing trashy stripper and ultimately winding up alone again. It's the classic tale of girl meets boygirldreamstag, girl loses boygirldreamstag, girl sings Fuck The Pain Away. Fin.

Obviously, as such, there are plainly elements that would have the American religious right reaching for their shotguns. But in Berlin it comes across as remarkably old-fashioned, narrative-based musical entertainment; naked 6ft transsexual (the striking Danni Daniels) notwithstanding. Indeed, oddly, it's probably got more in common with YMA at Friedrichstadtpalast than radical theatre.

There is even a bit where one of the songs is performed by three of the band playing [expletive deleted] “laser harps” like Jean Michel Jarre. Which really is unacceptable.

But, nah. It's all fine really. It's a likeable enough bit of fun. It's probably the least radical thing the HAU will put on this year, but that's ok. Basically, the songs suffer a bit for being plonked into the context of a slightly wonky stage show (written by Peaches, directed by Peaches. Verdict: she's a fine musician but doesn't know much about staging) and the stageshow suffers for aiming itself at Broadway rather than Hammersmith or indeed at the HAU itself – I'd love to see the version of this show that Alain Platel would have come up with, for example – but, yeah, as long as you don't expect too much from it, you'll have a perfectly nice time. 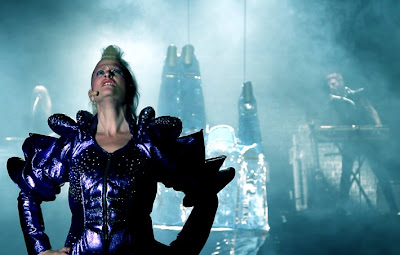