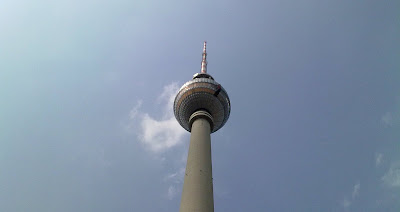 50 Aktenkilometer (50 Kilometres of Files) takes the form of wandering around the centre of ex-East Berlin (so, actually, what is now the centre of Berlin, what was the western edge of ex-Ost Berlin) with a map. This (or at least as much of the map as would fit in the scanner...): 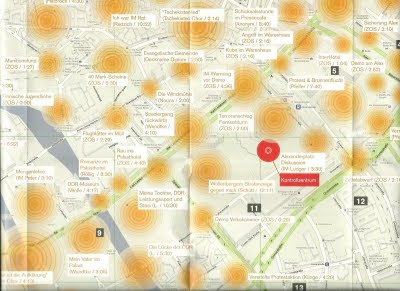 Wearing a pair of headphones, plugged into a GPS/mobile phone/receiver thingy. This: 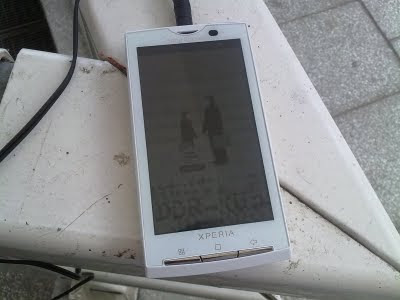 The (approx 100) Orange Points marked on the map, signify the epicentres and radii of signals being transmitted around the city which are receivable by your headset/device-thingy.

Whenever you hove into range, your headset starts playing you the recording attached to that site (yes, *Starts*. They're not on a loop. You get each one from the start whenever your headset moves into range, and it keeps playing it for pretty much as long as it can. It struck me as tremendously clever and complicated).

The subject of all the recordings is the East German secret police or Stasi.

There are recordings of actual telephone conversations and interviews, there are readings of files performed by actors and there are interviews with former victims of the Stasi. There are also patriotic DDR songs. Many of the recordings relate specifically to the location in which they're played.

Some might be recordings of someone making a phone call from or relating to the spot you're standing on over 22 years ago.

Others might have been recorded in the last few weeks by someone audibly moved to be revisiting this specific spot.

The clips range from the workaday business of an organisation dedicated to spying on the entire population of a city – perhaps one of the most striking things is the deadpan tones of voice of the bored agents making and taking calls, and the occasional fact of them having a bit of a laugh about something – to heartbreaking stories of betrayal, separation, torture, and imprisonment.

Some of the clips would even be quite funny if they weren't so sinister: an agent getting phoned up by a series of people all watching the same diplomat repeating the same one piece of trivial information – that he'd checked into his hotel.

I did the piece by bike (– and, as always, with sketchy German). What was striking, taking the piece this way, rather than doing it on foot, was the extent of both the project (remarkable), but also of the source material.

It was a beautiful, sunny, Saturday afternoon in late May. Berlin was full of tourists. Some doing the beautiful old buildings, some, naturally, on the Ostalgie trail. Others again no doubt looking at the city as the former capital of the Third Reich. As such, there is both a massive disconnect between the evidence of one's eyes – Berlin, the (sunny, hot,) modern, Western, capitalist shopping and tourism centre – and the evidence being beamed into your ears.

You started to feel that everywhere, every corner, ever street, every nondescript shop-front or easily overlooked side-street had a story to tell. Indeed, just cycling around for three or four hours, hearing constantly new material, new stories, new evidence, was exhausting. And this was only 100 recordings. The total running time of the recorded show is upwards of ten hours. Then you think that this was going on for forty-odd years. And not just in Berlin.

One of the strange effects of Rimini Protokoll's wider project of telling one about the world is to open your eyes to the sheer impossibility of taking it all in. When you factor history upon geography upon population, just the extent of the experience of the world starts to feel impossibly enormous. That so much of it is also composed of misery is not a cheering thought.

That said, it feels like a necessary project. It's almost a shame that the thing is voluntary and ticketed. It felt a bit like this sort of experience ought to have been mandatory for everyone in the city – an important exercise in not just papering over the past with a bunch of new shops and upmarket bars or restaurants. 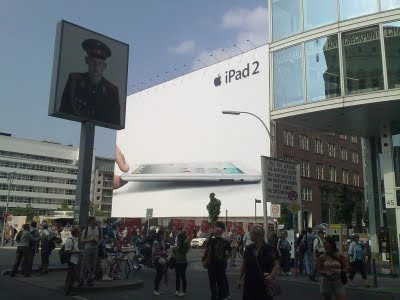 Above: The cover of the map. Below: The “control room” at the bottom of Berlin's most prominent landmark, the Fernsehturm (TV Tower) (see top) on Alexanderplatz. 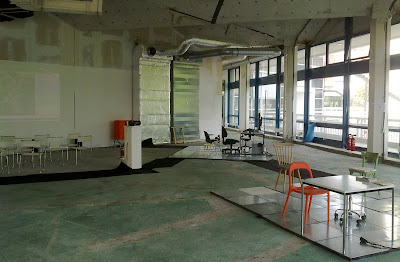 You can also listen to specific recordings in the control room by finding them on large computer monitors: 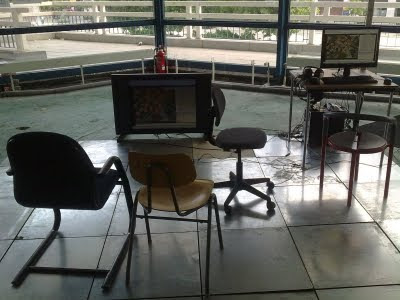 The TV Tower reflected in the glass of Park Hotel Berlin. 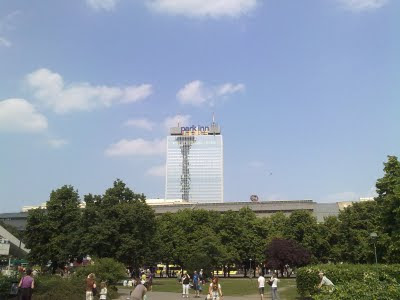 The thing itself. Again. 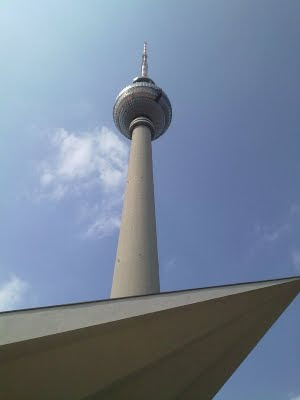 I think this is an amazing project and a fantastic use of current technologies to gain a greater insight into modern history.