[Possibly not quite finished] 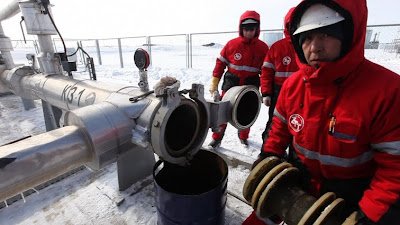 We know about Rimini Protokoll now, yes*? What they do is create a kind of verbatim theatre, but using the real people, rather than actors-speaking-the-words-of-interviewees (*more at the bottom, if not). Beyond the method itself, the more you see of their work, the more you also start to recognise themes running between the pieces. There's a preoccupation with Globalisation economics, immigration and history running alongside their central theme of work or labour.

In this, Bodenprobe Kasachstan is no different. It collects five people all of whom have connections to Kazakhstan and who now live in Berlin. Using bits of their life stories, and stuff they know, it gradually paints an incredibly detailed, rich portrait of the country and of its geopolitical significance.

The first speaker, Gerd Baumann,worked for an oil drilling company in Kazakhstan. He is well over six foot and looks like the kind of Aryan superman briefly popular in the middle of the last century (indeed, he grew up believing his grandfather was a high-ranking SS officer who was imprisoned for 15 years at the Nuremburg trials. Later he reveals that he discovered his real grandfather was a Jewish rocket scientist who was deported to the USSR). In the first few minutes, he explains the provenance of his equipment: “the rods are from Libya, the generators are from Halliburton”. That one sentence neatly encapsulates much of what you need to know about Kazakhstan and its oil industry. It's an amoral wasteland, doing business with companies and countires with the blackest reputations around.

The second speaker, a much older man, Heinrich Weibe, mostly relates the peculiarities of his life story. He started life as a German living in the Ukraine. When the USSR invaded the Ukraine his family (he was a child) were transported from the Ukraine to Archangelsk where his father, a minister, was imprisoned for preaching. Eventually, about a decade later, they were sent to the Ukraine.

He talks about the the barren landscape and shows a photo of the one-storey wooden houses dotted along the single road running through the town where he grew up. The picture morphs into a video showing that barely anything has changed in the past fifty or so years, other than there are now cars and massive oil tankers using the road.

Everyone's life so far has been related to the production of oil. And to their German ancestry. Apparently 1.1 per cent of Kazakhstan's population is Ethnic German.

The next speaker, Elena Panibratowa (?), was born in Kazakhstan. Her preoccupation growing up was with the country's other main industry – it's involvement, as part of the USSR, with the Soviet space programme. Apparently the town where she lived was close to a Cosmonaut training centre and so was visited by numerous politicians and Cosmonauts. Apparently Kazakhstan was also regularly used for testing nuclear weapons. First by just dropping them on it, then by blowing them up underneath it. Every second Sunday at 11.30am. She tells us how many of her family have died of cancer. There is a video of the graveyard in her home town.

Nurlan Dussali is an Ethnic Kazakh who has emigrated to German. He used to work as a broker on the energy markets. Now he sells solar energy. In a video, he demonstrates how you can make $50 in three minutes buys some stock and then selling it when it has risen in value.

Gerd tells us how much an experienced drilling engineer can make in Kazakhstan - $1,000/2,000 a day. He performs “a conversation” with a friend on video (the conversation isn't actually live, it's just him saying his bit and then the video playing his friend's bit). The friend suggest for that sort of money he should come back to Kazakhstan. Gerd refuses. They discuss the downsides of living in the country.

They also discuss prostitution and corruption.

Helene Simkin (?) is not from Kazakhstan but from its near-neighbour Tajikistan (the two countries don't actually share any borders). She talks about Tajikistan's different heritage, the fact that its language is from Iran – also a near neighbour. She sings a national song. She talks about various jobs she's had, and her dream to become a performer. She talks about being employed at bars/clubs in oil-rich countries. She compares Kazakhstan's new capital city Астана (Astana) with the cities of Dubai.

Her talk of dancing for rich men in oil rich countries is intercut with Gerd sagely noting that actually prostitutes in Kazakhstan are more expensive than prostitutes in Berlin and Nurlan discussing the new buildings of Астана - one is designed by Richard Rogers, and another which houses a lucky imprint of the presidents hand on a gold triangle inside an large golden sphere.

And this is how the piece works. Gradually, slowly, it gives you more and more information. Much of it just being people giving details of the working lives, details of aspects of their jobs, and their working and home environments, their life stories, fact and local colour. And in under two hours you've been presented with this incredibly intricate picture of how a more-or-less unknown (no, fucking Borat does not count) part of the world actually might turn out to be incredibly strategically important in the coming years.

The theory is, that there's actually a lot of untapped, undrilled oil under Kazakhstan and right now, there's something not unlike the gold rush going on over there.

A video camera is hoisted by four of the performers above a map of the area showing not national borders but drilling rights. Gerd talks about his main skill – essentially drilling sideways – i.e. under into someone else's drilling rights. It's nicely designed with slabs of rubber flooring standing in for the steppes of Kazakhstan and some stunning films of the oddly epic, but bleak panoramas.

There's music too. Unexpectedly lots, actually. Much of it very listenable as well as, y'know, anthropologically interesting. Almost enough that I considered suggesting that London Road wasn't the only verbatim musical around (although the honour of first goes to the Czech Republic's Tomorrow Will Be, for the record).

When they're not talking to us, the performers power various exercise bikes and treadmills to show what amount of energy human effort produces. We're shown a small amount of crude oil and told how far it'd get us.

The scale of all this is really beyond comprehension. The numbers involved in oil production. The size of this country with only 16 million inhabitants. The distances travelled by Heinrich from the Ukraine to Archangelsk to Kazakhstan. And yet the actual people in front of us manage to make sense of it. Or at least explain that it exists and humanise it for long enough to make it matter.

As such, part of Bodenprobe Kasachstan's appeal is its proximity to Wastwater – almost as a companion piece. The two function in unexpectedly similar ways – people talking about their lives just by mentioning places and things evoking whole systems of government, history and economics and touch on unexpectedly similar themes – perhaps those which are gradually going to be the only real underlying themes.

Here, we do not even begin to touch on “climate change” but on its counterpart: the running out of the global oil supply. This idea is rubbished. Oil isn't going to run out any time soon, given what's apparently under Kazakhstan. What is more terrifying is the amounts of money being talked about and the way that other peoples lives are shunted around by political powers, corporate interests or just by money.

It's hard to capture just by recounting what we're told and what happens on stage, just how intellectually exciting the show is. It has a real talent for picking up the epic sweep of 20th century history and telling it at a human level in a way that conveys the scale at the same time as making it almost imaginable. At the same time, it presents a clear story without really making moral comment on it.

There's an interesting piece to be written about the way that Rimini Protokoll's subject-performers are allowed to self-edit and present. But for now, I'm just very pleased to have seen such a thought-provoking piece. [and grateful to have finally gotten close to writing about it]


It should also be noted that Rimini Protokoll's first UK commission, for the National Theatre of Wales, Outdoors opens about now.

Ant Hampton has also written a brilliant description of their show Heuschrecken.
Posted by Andrew Haydon at 21:27

Elena Panibratova is not from Kazakhstan but from its near-neighbour Tajikistan. And Helene Simkin was born in Kazakhstan. Best regards, :)