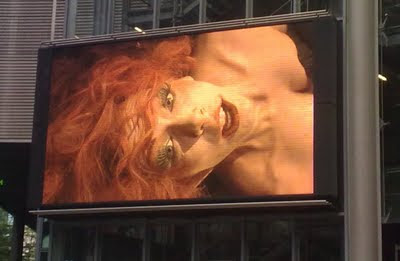 If Verrücktes Blut was pretty atypical of “German Theatre” (if an excellent “public event”), Theater Oberhausen's production of Henrik Ibsen's Ein Puppenhaus (well, Ibsen's Et dukkehjem, or A Doll's House as we Brits have it) presents an excellent example of one particular school of Regietheater. Director (and, here, designer) Herbert Fritsch was an actor in Frank Castorf's Volksbühne company while it was revolutionising post-Mauerfall German theatre. And it's clear that he's taken much of his former comrade's style on board in his directing style.

You know A Doll's House, right? Pretty typical Ibsen: bunch of people standing around in a room in a 19th century Norwegian house, dressed in period costume. The acting is incredibly subtle; a maasterpiece in naturalism.

Fritsch's production is a garish, grotesque nightmare. Opening to the queasy, insistent strings of Bernard Herrmann's music for Hitchcock's Vertigo, the stark square playing areas is lit with alternating reds and greens.

Manja Kuhl's Nora is a disturbing Tim Burton fantasia on infantalised womanhood. Decked out in a short, voluminous chiffon pink baby-doll dress, ballet pumps and a shock of auburn ringlets, but lethally long legs. By contrast, Torsten Bauer's Helmer is a violent caricature of old age: all pealing-latex bald-wig, powery whiteface, and a wardrobe hymning the joys of beige.

The playing style offers a similar fantastical bluntness, almost as if the cast were assaulting the play rather than performing it. Lines are delivered at a pitch of near-hysteria, while the cast physically play out just about the most extreme reading of the subtext imaginable. If A Doll's House is secretly about sex and power, then it's not a secret here. Nora is forever being pawed, groped, mauled and spanked while, in turn, coquetting and flouncing, flirting and virtually forcing herself on people. A sexuality the text only hints at is here brought alive and then weaponised.

It's not a style I've always warmed to. I think there were many similarities in this performance to Castorf's recent hit Nach Moskau! Nach Moskau!, which I really tried to like, but didn't. But here, I really got it. It's perhaps easier to watch a sexual subtext physicalised than a socio-economic one, but even so, seeing this is already feeding my retrospective appreciate of the Castorf – and so perhaps apart from anything else, this Nora is an excellent entry-level performance for this style of direction. Castorf-lite, or Volksbühne-für-Beginners or something. And, yes, this took a bit of warming to, too. But once I got there, I thought it was great.

What was fascinating about the performance was the way that you could almost see the play being dismantled in front of your face. The idea that the lines the cast were shrieking at one another were the same lines that are delivered with as much understatement and earnestness as possible in other productions of Ibsen (Ostermeier's wonderful Hedda Gabler, for example) was almost reward enough for sticking with it. And yet, it was still the play. But not really functioning in anything like the way you (I, we?) think it's meant to.

Of course, there was again, here, the extra dimension of the fact that this wasn't actually *live* to consider. Unlike Verrücktes Blut, I don't think the Theater Oberhausen staging could possibly have been a recording of a live performance in front of an live audience. Instead, while this was still very defiantly a stage production, it was very much a stage production for the cameras. What might be direct-audience-address live was here close-up, to-camera work, while the way the cameras weaved in and out of the action, cutting rapidly and dancing about the performers also suggested a lot more than one take.

I also wonder again if, the freedom of watching, of being outdoors – seeing the thing on a massive screen, with close-ups available, and a whacking great sound system definitely making the performance the biggest noise-polluter by a country mile almost drowning out the occasional police siren, let alone the general low-level chatter of a public space – had a bearing on reception. Well, of course it did. I could smoke, go to the loo without upsetting anyone, and stretch my legs from time to time, all while feeling the wind on my face and seeing the blue sky above. In this respect, it was pretty much the opposite of “theatre”, and it didn't feel like a bad thing at all. That said, I would still like to sit in the same room as the original and experience it as it was meant to be intended.

While I'm not sure it said a great deal about anything very seriously, as a way of delivering the play – serving the text, indeed – it worked totally. And pretty much turned my ideas of what you could do with Ibsen on their head. Essential viewing if you can get hold of a copy. 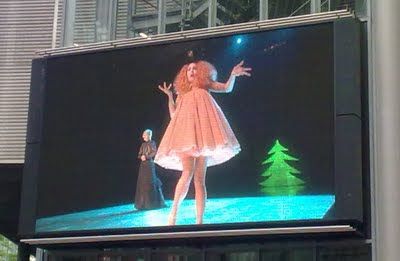 You get a vague sense of overall style from this clip, although this might be a particularly overwrought moment:

Although this, from very close to the end, is better – note burning cardboard fir tree in background and the music to another Hitchcock film, this time Psycho. I also love how untroubled this Nora is by the collapse of her marriage.