Before Your Very Eyes – HAU Eins 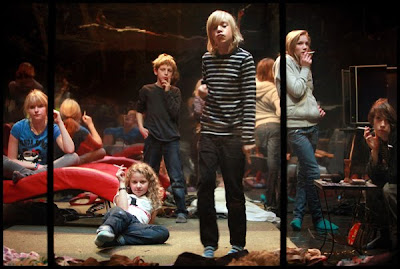 Gob Squad's new show, Before Your Very Eyes, is both something of a departure and pretty much exactly what you'd expect from Gob Squad. It's also the third part of “CAMPO”'s (didn't they used to be called Victoria?) “productions with children for adults” – the second part of which was Tim Etchell's much-praised That Night Follows Day.

So what it basically is is a Gob Squad show with children in it instead of Gob Squad. This is both the source of its undoubted charm, but also the start of its weaknesses. The premise is as cute as it is problematic/troubling. They've got seven children aged between 7 and 15 in this mirrored box on the stage (shades of Castellucci's Inferno), flanked by video screens (cf. most shows by René Pollesch). The show is nominally about growing up/ageing.

The children are introduced by means of videos of their younger selves dancing around on their local streets and then jumping into the mirrored box to the strains of Queen's Don't Stop Me Now. (Actually, there is a lot of recorded music in the show. Indeed, without Ryan Gosling's band-plus-children's-choir-project Dead Man's Bones it could have been quarter of an hour shorter).

Asked questions by a Big Brother-style disembodied voice (in English, mercifully), they respond in their native Flemish (the kids, like seemingly all kids in alternative theatre shows (see also Once and For All..., Teenage Riot and That Night Follows Day), are from Belgium), with (happily readable) German surtitles scrolling along atop their little cage.

Perhaps the neatest trick Gob Squad pull is having the one-year-older selves, the children now on stage, holding dialogues with their younger selves on video. This at once points up the meticulous level of planning and scripting – although the presence of instantaneous surtitles is also always a bit of a giveaway, even when they don't correspond precisely with what's said. 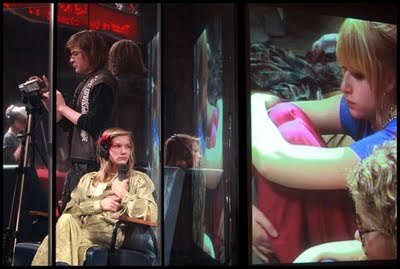 But even as your brain knows that it's just a neatly planned joke, you can't help but be moved when a younger version of a boy eagerly explains his current favourite toy and his one-year-older present self tells him that just between the two of them that toy isn't actually that cool. Of course, the reaction of the younger-self on the screen – looking hurt and crestfallen at his older self's words – is necessarily fake. But it still works. Which is also strangely annoying. The neatness of the trick evokes an (entirely unwarranted, I'm sure) a kind of self-satisfaction about it all. Another problem is that this level of knowingness – of editorialisation – also gets in the way.

The disconnect between this show and the rest of Gob Squad's work is that in everything else they create it and perform it themselves, so there's usually a sense of the performers owning their material; representing their own concerns. Here, while there's an obvious level of collaboration with the children, there's also this level of editorial intrusion where the company simply project their own concerns and use the children as puppets to make points.

Given that this is a piece of theatre, that seems almost a strange objection to make. Isn't that what all theatre does? I'm reminded of the discussion of children on stage in Nicholas Ridout's invaluable Stage Fright, Animals and Other Theatrical Problems, but it's not precisely the uncanny lack of agency that rankles here, so much as the banality of some of what the children are asked to perform.

The structure of the show meets them at their own ages and then instructs them to grow up (cue frantic youngsters tugging their own and each others' limbs etc.). We next meet them all pretending to be 19. Then 45. Then at the point of death, which here seems to be about 77.

For each “age” the children perform a kind of pantomime of that age-group. At 19 they daub themselves in black lipstick and eyeshadow and don black hoodies and leather jackets to become a bunch of tiny goths. There's the disconcerting sight of children pretending to smoke and slightly sexualising themselves, which is probably always good for an alternative night out, but it's the bit where they do *being 45-year-olds* that derails the show.

The dressing up itself is perfectly nice, but the spirit of the scene which follows is a protracted bit of neurosis taken straight from the problem pages of the Daily Mail. It's all failed aspirations, women unhappy without men, everyone defining themselves by their relationships, snobbery about snobbery, and just plain snobbery. This would be the drawback to Gob Squad being Anglo-German: sometimes the Anglo- gets out.

Visually, however, this is one of Gob Squad's best. Nestled in the intimate wood-panelled, low-key grandeur of HAU Eins (a bit like the Royal Court in terms of managing to make a pros. arch hall feel somehow smaller and more intimate), there are some lovely stage pictures and the whole set-up of the children in a kitschy mirrored room – also brilliantly lit – is a pleasing, if wholly unoriginal conceit.

There's a sort of subversiveness to it. I mean, sure, it's all pretty inevitable stuff: putting kids on stage and having them pretend to smoke, say the odd swear word, and dance around to songs depicting a world sexualised well beyond their years, like a kind of Live Art Mini-Pops (actually, looking at that video: a) was Mini-Pops just a Live Art joke from the very start? b) I'm really not sure how this show actually does differ in places). Still, you get the feeling that if the Daily Mail got hold of a description and the show was going to play in Britain there'd be all sorts of fuss. So, success, right?

Not sure. For every time Gob Squad landed a punch, cocked a snook or tugged a heartstring there were bits where the cheapness of a gag or conceit threatens to knock the whole thing back into the minus zone again.

It's a good show, and I think a lot of people will like it a great deal, but for some reason (and I am more than happy to admit I was in a minority on this) I felt it didn't quite free itself from the inevitable accusations of putting words into its performers mouths, and beyond that, that those words weren't quite as profound as one might have hoped. But, I'm equally happy to believe I was just in a bad mood when I saw it, and I just took it in the way way, and wanted something other than what it was offering. 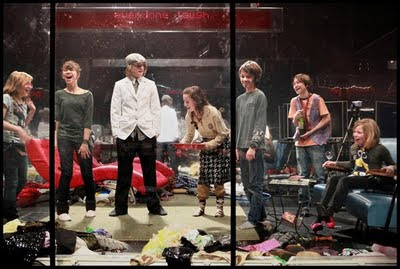 More (perhaps unfair and uncharitable) thoughts on Gob Squad [excised from first draft of above text, not least for containing far too many “I”s. A declension: “I foreground my subjectivity, you say “I” too much, he writes contemptible me-journalism” – except in this case, it might well be the other way round]

We've all seen a fair few Gob Squad shows now, yes? I came pretty late to the party, starting with Kitchen. I saw Saving the World as part of SPILL '09, Revolution Now as part of LIFT'10 and SuperNightShot revived at Bar25 in Berlin last summer.

I suppose I've had a kind of inverse relationship with Gob Squad to the one I've had with Rimini Protokoll. Whereas with RP I always respected the work, I think my admiration for the company and what they do has tended to grow with every new show I've seen. With Gob Squad, I think I was always going to love whichever show of theirs I saw first (although I reckon I was particularly lucky that it happened to be Kitchen, but think I'd have been just as excited if it'd been Revolution Now or SuperNightShot), just because that combination of Liveness, experimental-looking techniques and their desire to be likeable was always going to be winning.

Since Kitchen, while I've liked every show since, If I'm honest I've found the smile on my face feeling a little more forced every time. I don't know if you've ever attended the recording of a radio comedy, but there's a bit at the end where they usually have to re-record some of the jokes for technical reasons (muffled sound, fluffed timing, etc.). The thing is, when they do this, you – the audience – have to reproduce the laugh to the joke. Except, second time round, you know the joke, so your natural reaction is just to nod, rather than crack up. That's some of how it's got to feeling with Gob Squad.

The problem is, they're not really peddling anything very profound. They are prime exponents of the “doing it crappily” aesthetic (cf. Ken Campbell – as quoted by Shuttleworth here or here), but unlike, say, Forced Entertainment, from whom they half-inched the aesthetic, wholesale, there doesn't seem to be the same anger. Indeed, their shows have increasingly struck me as profoundly reactionary, but perhaps I'm missing the point and their shtick is aimed at parodying and needling a prevailing atmosphere of narcissism and lassitude rather than simply furthering it. 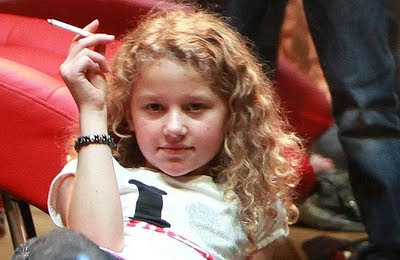