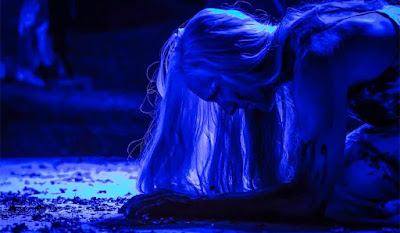 Thanks to Michael Billington, I’ve been thinking a lot recently about “canonicity” and the Greatness of Plays. Thanks to Social Media, I’ve also been thinking about both the ongoing refugee crisis in the Mediterranean (due to, and with consequences for, *everywhere*) and the ideas behind Duncan Macmillan’s new play, People, Places, Things. These are the preoccupations with which I went into James MacDonald’s production of Annie Carson’s new translation of Euripides’s play.

Within a few minutes of the thing starting, you might add to this: remembering I was very glad to be seeing Ben Wishaw on stage again, and how much I generally admire him as an actor. And also it being nice to see Bertie Carvel on stage again, and how much I’d liked him in Jonathan Strange and Mr Norrell on the telly. And remembering Tim Bano’s masterful review of this production, but also what he said about it outside that review in the bar of the Traverse Theatre. I remember reading another review?/tweet? Which complained that Ben Wishaw didn’t exert enough sexual magnetism to convince as someone who drove Penthius’s mother , Agave, to tear her own son limb from limb. And thinking that I too have to write about this production, and how much *assigning silly reasons to why one doesn’t especially go for a particular production* can be the undoing of otherwise perfectly reasonable accounts of a thing.

[And, now, writing this, remembering how much I resent any other reviews that spend the first two paragraphs not getting to the point at all...]

The facts of the matter are these: ultimately, I was almost entirely unmoved by the entirety of this Bakkhai. I don’t mind being unmoved, I’m just as happy with having my synapses exhausted with the crackle of idea against idea. That didn’t happen either. What I thought about most during this production was “Why am I not feeling anything, or really thinking about anything other than the absence of ideas”.

This *sounds* very damning. It honestly isn’t meant to. I actually felt pretty content. Although I’m not sure if content was how I was meant to feel.

Visually, the stage of MacDonald’s production – designed by __, lit by __ – is attractive, modern, unfussy. A square stage jutting out of black mounds of earth curving round the back wall. Costume-wise, I was a little less sure: the chorus come on like more colourful versions of one of those modern-dress Katie Mitchell choruses – holidaymakers in a sunny place. They sing their first chorus and then dress in fawn-skin (or whatever it is that’s specified), *over* their modern strappy Topshop tops. Which feels sort of fine, but sort of fussy.

When Bertie Carvel as Penthius arrives he’s wearing a politician’s suit and doing a first class impression of David Cameron. Ben Wishaw, as Dionysus in human form, changes costumes several times, generally in close-fitting beiges,; he has long hair, a faint beard and, for one scene, a dress. So we’re in a kind of leg-up-to-comprehension modernity. Nothing particularly specific or mapping onto a particular thing, but recognisable generalities.

There’s something strangely quiet about this Bakkhai. It’s not exactly, well, Bacchanalian. Orlando Gough’s music for the chorus is lovely – a kind of Philip Glass arrangement of the Voix Bulgares, modern, but without quite the atonal savagery that if I’m honest, I guess I was sort of looking for.

I think the trouble here is more that the staging of this music, in particular, is either a) just plain unimaginative, or b) – more charitably – hampered by the demands of making it possible to sing it. That is: the music is sung very prettily. In order to accomplish this, the singers/chorus don’t move a great deal. And there’s a lot of singing. All of which is very static. Which means the chorus of Bacchic women are kinda, well, statue-y. And the music, while nice in the abstract, doesn’t quite do the job of communicating anything about the simmering fury of these religious fundamentalists. The chorus more resembles a choir of Cambridge University Music Post-Graduates on a tour of the Balkans. What’s most odd is that I feel this *could* work brilliant as an idea/aesthetic, but somehow here it doesn’t. It feels like a half-way house where neither thing is fully realised enough (neither wildness nor distance-from-wildness).

The story itself is clearly told, and with this clarity, it feels that – again – any sort of nervous emotional impact has been lost. This emphatically isn’t to say either that clarity or loss-of-feeling is bad, but there doesn’t feel like there’s anything near enough intellectual substance to feel the gap. And so we’re left in the rather draughty halfway house, neither feeling awfully much, or being made to think very much either.

The usual cultural-prejudice-resonances occur to us (to me) – anything from the Greek Financial Crisis to the Syrian Refugees – but I think that is almost entirely down to the fact that we know the play itself is from ancient Greece, and have enough wit to imagine any number of displaced people (in this case Bacchus’s followers) both as the religious fundamentalists of ISIS, and the Syrians whom they have displaced. As I mentioned at the beginning, seeing this late in the run, and as reports were beginning to explode about Duncan Macmillan’s apparently searing critique of too much drinking over the river, it also struck me as interesting/ironic that at root, apart from being the usual Don’t Piss Off The Gods sort of thing that the Greeks went in for, this is a play that says: “Really, Don’t Not Drink. No Good Will Come Of It” (Or: "If you think you’ve got a headache now..."  etc. etc.).

I suppose I should make some sort of comment on the fact that Ben Wishaw wears a dress for a bit, and Bertie Carvel doubles as his own (well, his character’s own) mother, with a long white wig, and a performance that is really interestingly perched on the three-way cusp of drag/parody/near-naturalism. It’s a genuinely uncanny thing. And I wasn’t sure either a) what to make of it, or b) how the hell it fitted into the rest of the thing.

Annoyingly, this performance is undone (/further distanced) by a Very Silly Ripped-Off Head. Which is *obviously* a prop (twice obviously, they were never going to get a real one), but so distractingly obviously a terrible prop, that you wonder why they didn’t either a) get a better one, or b) just use a lump of meat/a watermelon/a pig’s head/a football. Anything but this silly thing which we’re asked to believe evokes horror and pity.

Ultimately, it feels like the dramaturgy here has – like Bacchus’s followers – pulled in many directions at once, and in doing so has made rather a mess of what it was pulling at.  In short, none of the things here are necessarily *wrong*, but as a random collection on not-wrong-things, I didn’t end up getting much of anything from this production.
Posted by Andrew Haydon at 14:33