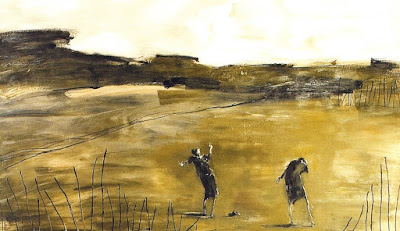 The wasteland outside a city.

Wind whips the robes of an imaginary female figure.

“Michael! Michael! You have summoned me! You have given me life! Your head was my womb!”

A bloodied mass at her imaginary feet shifts, revealing itself to be the broken body of a hapless septuagenarian.

Her imaginary kohl-rimmed eyes flash, as she draws from a concealed pocket a tattered scrap of newspaper.

“What can possibly be the matter with...”

Another flash of her imaginary eyes immediately silence him,

“Allow me” she says; her voice both ancient and modern, speaking to the helpless critic across the centuries. She gazes at the scrap of paper and reads:

“For all its oddities, the production tells the basic story... I was less moved than by the Icke adaptation. But at least the evening shows how ‘justice’ – the word that resounds through Mullarkey’s text like a drumbeat – easily transmutes into blood-soaked revenge.”

The vision fixes the broken man with her imaginary stare. He snaps, pushed beyond endurance.

“HOW IS THAT BAD? HOW IN GOD’S NAME CAN YOU HAVE A PROBLEM WITH THAT?” his voice a terrible cry in the still early morning.

“Oh, Michael, Michael, where to start?” comes her dreadful, familiar reply. “Let’s start it off easy. How about ‘The Chorus, for instance, are modern figures with trilbies and brollies’...”

Her reply is a daemonic scream “WHEN WAS THE LAST TIME MEN WORE HATS, MICHAEL?”

The critic’s body slumps once again. Of course. When did men stop wearing hats? Damn the world. Damn the Sixties.

The silence outside the city is punctured only by occasional electronic noises from the Radiophonic Workshop.

“Ok, so the chorus weren’t modern, but this isn’t why you usually come” the critic nervously volunteers after some time.

“AND WHY DO I USUSALLY COME?”  The imaginary voice roars its terrible imaginary question.

“because of women,” he replies meekly.

“Exactly so. So this... This...” her imaginary hand shakes the very real piece of paper in front of his face

He stares at the bloodied, hard ground before him. Dare he ask another question? He must.

“How is this about women?” He barely gives the words sound, so soft is his voice...

The imaginary figure seems to shimmer in the morning light, her movement barely perceptible as the critic reels from unseen blows. Time passes. The old man’s body lies twitching.

She reads to the prone form: “The establishment of democracy is marked by the parading of a giant penis of a kind we haven’t seen since Peter Brook’s 1968 production of Seneca’s Oedipus.”

“That actually happens” he breathes.

“WHY?” asks the imaginary woman.

“I DON’T KNOW” screams Michael. “Look. Look at what I wrote. ‘The production tells the basic story’. When they establish Athenian democracy in the play...”

“WHO ESTABLISHES ATHENIAN DEMOCRACY?” Her gaze is terrible.

“All of them?” suggests the hapless critic.

Once again the imaginary woman shimmers and the critic’s body twitches.

“THE MEN. THE MEN. IT WAS THE MEN” screams Michael at last.

“SO WHY WAS THERE A GOLDEN PHALLUS AT THE END?”

“BECAUSE THE ORESTEIA IS A MISOGYNIST TRAVESTY ABOUT THE TRIUMPH OF PATRIARCHY” he screams again, now a broken man.

“There, there. That wasn’t so hard, was it?” the imaginary figure smiles. “And what does the production do?

“The production tells the basic story?”

“Is the production about the play’s misogyny too?”

“Why is that so hard to understand?”

“It’s just a play. It’s about the establishment of democracy. It’s a good thing. Aeschylus is one of the great-grandfathers of modern theatre. Rory Mullarkey’s  new version of the play is really vivid and good. I even admitted as much.”

The imaginary female form twitches. The critic cowers away again.

“Alright, alright. The production is making a comment on the play. I see that now. The director might conceivably have had a conversation with Rory Mullarkey. They might have made some decisions together. Some decisions about sexism. Fine. Whatever.”

The imaginary female critic smiles almost imperceptibly to herself and vanishes.

The old man sits on the ground as the sun finally breaks over the horizon, his long shadow reaching almost to the city wall.

“I still don’t get why it was set in the sixties, though” he mutters.

[cover image by Howard Barker]
Posted by Andrew Haydon at 21:02