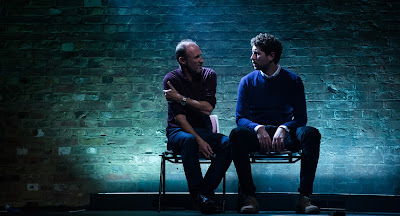 hamlet is dead. no gravity is the first contemporary German-language play I ever saw performed in German (and in Germany). I’d seen English productions of German plays, and German productions of English plays (and Ibsen), but this was the first [Austrian] production of an [Austrian] play I’d seen. It was June 2008 and I think it marks the proper beginning of my love affair with German theatre.

[you can read my original review here, if you want. It’s not especially good. Scroll past the German translation of the review.]

So, y’know, after all this time (and a couple of subsequent Ewald Palmestofer plays later), I was curious to see what *the play* itself was *actually like*. And nervous, too, because I had loved the original production so much that I didn’t hold out much hope of seeing past it.

In fact, Andrea Ferran’s production is a model of clarity and velocity. I could nit-pick, but frankly I’m not in the mood and it’s not really what criticism is for. James Perkins’s set is, as far as I can make out, pretty much just the bare steel and brick bones of Arcola Studio One and six plastic chairs. (I apologise profusely if there’s more.) The black metal skeleton of a door has been added. The lighting is spare, stark, and hits the stage from vertiginous angles. There’s also some pretty damn fine sound design whirring away in the background (Alexandra Faye Braithwaite), but more of that later.

To my immense surprise, hamlet is dead... actually turns out to a tightly structured plot/story/narrative (not immediately apparent from its original production). And it’s gripping once it gets going. I will note, lest people buy tickets off the back of this review and want to strangle me twenty minutes in, that it’s one of those plays which starts off with some pretty dense monologues, and imagery, and *stuff*, and it’s only as time passes that a story begins to emerge from this welter of opaque exchanges. I don’t think I’ve frowned (in concentration) through a play so solidly in *ages*. And I loved it. The piece cuts you no slack at all, you just have to think. Hard. (I dunno. Actually, I bet you’re fine just letting it wash over you. What can I say? I like concentrating.)

The plot coalesces around a brother and sister, their two exes who have since married each other, the siblings’ parents, and their grandmother. The brother and sister are, well, *ambiguously close* to say the least, while their mother harbours murderous intentions toward her own mother. The characters have all been reunited by the sudden shocking death of their friend Hannes.

[It is interesting to note that the play already feels like a product of its time – it is definitely a *pre-financial-crisis* play. And, to my mind, it is also Very Austrian Indeed – something worth knowing to contextualise the references to occupying Russians, but also the deeply sardonic sense of humour and apparent dislike for its protagonists.]

What is more interesting to me, is the extent to which – in this production, in this translation (crisp, contemporary, spiky vernacular by Neil Blackadder) – the play does also feel like an off-kilter reflection on actual Hamlet. The characters and situations don’t map exactly, but there’s a kind of *feeling* here, that really makes sense of the title. There is also the odd word or phrase – “rotten” sticks out – which is clearly deliberate, but I don’t know if that’s a direct translation of something that would be equally understood in German, or if it’s a felicitous embellishment made possible because Hamlet was written in English. I don’t know if Hamlet is quite as ingrained in the German psyche in the same way.

Back in 2008, along with finding the production a revelation, I think I was more impressed by the nihilism. This time around, the nihilism expressed by the characters feels more like a symptom of their problems, a reflection of their entirely alienated, dislocated lives. I have at least grown out of thinking it’s also ‘cool’. On one level, it would be nice to be able to say: well, yes, this is a savage satire of Austrian First World Problems a decade ago, and leave it there. But really? The bigger picture, the overall dramaturgy of the text, while not feeling like it especially maps onto specifically British issues as, say, Men in the Cities did, somehow still feels like it does say something very pointed about The West in general. Not so much a diagnosis of “affluenza” (or any equally irritating buzzword), but more the whole, massive, disgusting, underlying sickness. Like, portraits of families such as this just kind of concretize the enormous, ongoing vague sense of unease. Like, somehow, despite the fact it’s nothing like your life, you can point and say, “Yes. There’s something weirdly *true* about this.” I find that fascinating about it.

It is also worth noting that there are also some *really excellent* performances in it. Cary Crankson particularly stands out as the brother, Mani, but Elizabeth Chan and Richard Pryal as the siblings’ hapless exes, and ultimately narrators, bring precisely the right brittle brightness to bear on the situation. The whole (I’ve been reading Patrice Pavis recently, and I’m really fighting the urge to give in and say ‘mise-en-scene’)... The whole combination of text, direction, performances design, lighting and sound – toward the end the sound design just does this beautiful, subliminal, dislocated urgency thing that feels like it’s almost driving the entire narrative, it’s properly gripping – makes this production feel absolutely outstanding. Seeing it on Saturday night with a far smaller audience than it deserves also gives writing it up a certain sense of urgency. Sure, it’s nice to see a hidden gem, but, Christ, don’t miss it. This is a text which I think playwrights need to see performed, and also an outstanding British production of a German-language play that proves they really can have a theatrical life here. And outside “theatre-ecology” reasons, I thought it was just a really great, cynical, brilliant story.

[Ant Street in Studio one afterwards is also a brilliant production. Review to follow, ASAP. And I’m looking to the two pieces showing downstairs – also as part of the Volta festival – which I’m seeing next week.] 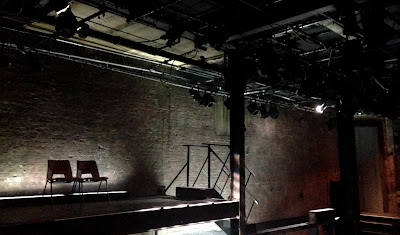 The small audience in a big space feels like a perfect complement to the play. Obviously you want a good piece of theatre like this to be seen by as many as possible but the direct audience address to so few a number of people (I was the only person sat on my side of the auditorium) adds to the intensity and the sense of being dragged into the production.

Completely ditto about the concentrating too. So much repetition of strands across different characters and complex ideas, simply connected but the speed...