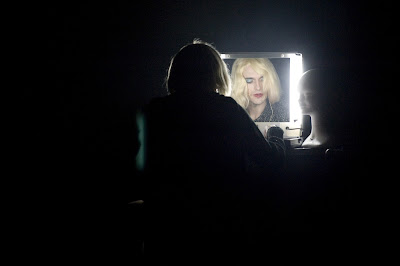 Jonathan Capdevielle is an extraordinary performer. We already knew this. I first read about him on Thompson’s Bank of Communicable Desire when Chris Goode saw him in Jerk in 2008:

“The performance by Jonathan Capdevielle is simply astonishing, in that it manages to yoke two normally incompatible registers: virtuosity ([...]an extended passage of ventriloquised dialogue is pulled off with incredible flair and a genuinely unheimlich chill), and intimacy -- his rapport with the audience is so ingenuously produced and so deftly managed as to become basically irresistible. And so we are pulled into his orbit, into proximity with this profoundly lost and frightened soul: and in the ecstatic derangement of his ventriloquism, we know in an instant and quite candidly that we too contain many different voices, and cannot reliably distinguish those that are us from those that are not.”

My first encounter with him live was as one of the three (non-speaking) performers in Gisele Vienne’s I Apologize about a month and a half later. It is still one of the top five best, most influential, important (to me) things I have ever seen – a spectacular blend of text, dance, incredibly loud music, life-size mannequins, buckets of stage blood and amazing, amazing dramaturgy.

On one – very satisfying – level, Adieu is obviously part of the same (abusive) family as Jerk and I Apologize (both Gisèle Vienne and her long-time musical collaborator Peter Rehberg have Associate credits here). At the same time, it is a completely distinct, original entity too.

It starts like this: Capdevielle stands in the centre of the barn-like stage of SNT’s main house in a soft, left-right strip of light and sings note-perfect snatches of Madonna songs. He is wearing a grey hooded top, baggy blue jeans and trainers. He does this for *a long time*. Or what feels like a long time. The songs are maybe more-or-less chronological for a while. It is curiously reminiscent of Jerome Bel’s T-shirts in Shirtology. A similar sort of dramaturgy. A similar sort of choreography of non-text text. A slightly guessable sequence, the pleasure of the expected and of the unexpected. And other thoughts – like the choice of phrases sung (instead of: t-shirts worn), the words themselves; do they add up to more here? It’s very hard to hold on to them long enough to make continuous sense of them. And maybe the rush to make *sense* is the wrong impulse. Perhaps we’re better off sitting in a feeling; multiple suggestions and meanings all active at once. It’s exciting though, and intelligent. Particularly when you consider that all you’re doing it listening to lines from Madonna songs.

He goes back to snatches of songs. Longer excerpts now. More development. A loop here, a delay there, a bit of auto-tune now and then. We understand the world of cheap dance music that is being described.

And everyone stops laughing. And there’s kind of a hush. Then we go back to Madonna songs and everything’s back to being fine. Except everything’s shifted. Having seen previous work, I felt oddly relieved to be back in the Vienne/Cooper/Capdevielle (dis)comfort zone. Now there was at least a sense of canonicity. I was reminded of the Dennis Cooper show that Chris is making and wondered what that’s going to be like.

What’s also been seeping in is additional snatches of dialogue. As well as being a remarkable singer (and puppeteer, though not here), he is also an exceptional vocal artist in terms of “doing the police in different voices”. He gradually sketches a visit to his father – the uneasy prior suggestion lingers – and mention of his dead mother and sister? The lights are all off by now except for the surtitles winking and changing in the darkness and the smoke. He goes and sits at a dressing room mirror-table (this week’s second) and this time performs an entire visit to (the sister character?) in hospital. Do we take this to be a flashback? Or pure fantasy? It scarcely matters. He’s one guy on stage with a microphone doing impressions while putting on make-up and a blonde wig and changing costume. There is (another, cf. Jerk) impressively lengthy, drawn out sequence of choking, phelgm, spitting. This is more medical than about physical violence, though.

Then, now dressed in blonde wig, heels and women’s clothes, Capdevielle returns to the stage to sing a medly of Lady Gaga numbers, and perform all the voices in a kind of concurrent half-acted-out radio play about a group of boys, girls, and queers having a violent, drunken night out in what I imagine as a particularly nasty disco in provincial France. It’s all heading toward vomiting and punch-ups in a mud and gravel car park (in my head).

And this is pretty much where it ends, except for the final coup of a five or six-strong male-voice choir who come out and sing an incongruous but lovely song about French mountains. It’s the sort of Volk song that sounds so right-wing you can suddenly *feel* musically the extent to which France borders Austria and Germany and there but by the grace of God, etc. This might not be the intention, of course. I just find folk music pretty suspect, and I think, given the dramaturgy here, the way it’s positioned must at least partly own this idea/feeling.


It’s – need I say I out loud? – brilliant (I thought). It feels both kind of durational (although only an hour long) and incredibly tightly constructed. It plays with that idea of repetition and boredom, but never to the point of actual boredom. It’s continually charming at the same time as being somehow slightly spooky, scary and repulsive (in the most literal sense). It’s kind of *soft* and hard at the same time. It’s both absolutely Queer and somehow also aggressively straight and masculine all at once.

It feels like it explores almost a whole universe or complex social matricies while a the same time having this intensely *local* feel (perhaps in part due to the universality of Madonna and Gaga). It somehow manages to turn being “about” child abuse, the darkest sort of familial relationships, and small town violence in a drunk disco parking lot into a more far-reaching meditation on more abstract ideas. I think it absolutely plays with both theatre and performance as well.

To resurrect a recent dichotomy: it’s punk, it’s experimentalism, *and* it’s flicking through pop videos on the internet in drag. It’s arty as anything, and completely populist (in the best way) at the same time. I think it’s probably so strange/Queer that it really does alienate a lot of its audience, and sitting there, feeling that happen in a small Serbian town (Novi Sad is an hour outside Belgrade) also feels somehow vital.

(Capdevielle’s notes for the BITEF page on the piece are also excellent and give a more precise sense of what he’s driving at)
Posted by Andrew Haydon at 12:15