Ibsen’s An Enemy of the People as Brecht’s Learning-Play – Centre For Cultural Decontamination, . Belgrade 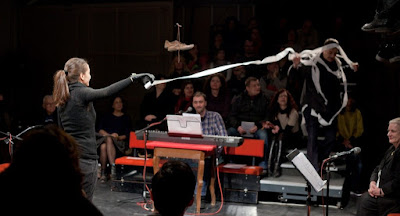 [skip first three paragraphs to get to the theatre bit. UK politics/pig-fucking first]

I saw Ibsen’s An Enemy of the People as Brecht’s Learning-Play on what may go down in British Political History as Pig-Fuck Monday. The day that a multi-millionaire who had “donated” £8million to the Tory party in order to buy a job had the first extracts of his toxic revenge-memoir published by the far-right Daily Mail newspaper (owned, as is traditional in Britain, by a multi-millionaire hereditary peer, and registered outside the UK for tax purposes) – the most memorable extract detailed the flimsy, but entirely plausible allegation that, while a student at Oxford University, our Eton-educated prime minister stuffed his cock into the mouth of a decapitated pig-head at a private drinking/dining society event. It was a strange day to to be English abroad, but also instructive because you got a bit of perspective, you saw it at a slight distance. Within England/Britain – judging by Twitter and Facebook – the country went through a rapid version of the five stages of grief, all glossed over in hysterical laughing and giggling. The truism that you only know something’s serious in England if everyone’s laughing about it never rang more true.

The reason that the British (or, rather, English, or English and Welsh – the Scots and the Northern Irish have got their plausible deniability pretty close to completion now) behaved like this relates to what Žižek said about Edward Snowden or Chelsea Manning and the files they leaked – that is (paraphrased): we already knew that all these things were going on. The reason people became angry when they were shown the evidence isn’t so much because they’re outraged because they thought such a thing was unimaginable, but precisely because they knew exactly that it was imaginable, likely, probable and yet allowed themselves to ignore it. (I think that’s what he said, anyway).

Similarly, the election of Jeremy Corbyn a week earlier has blown a massive hole in the hitherto neatly stage-managed illusion that Britain had a meaningful two-party system. It didn’t. It had Red neo-liberalism and Blue neo-liberalism, as one article neatly summarised it. But, thanks to the historical circumstances of Tony Blair’s election, the subsequent smokescreen of the illegal Iraq invasion (smoke comprising the ashes of a million burning Iraqi civilians), and the gradual-ness of the change, it always sounded like complaining was maybe a bit too dogmatic. And people gradually got used to Labour not really differing in any significant way to the Conservatives. Before the previous election, the right-wing press even put about the laughable myth that Ed Miliband was somehow “radically left-wing” and to disagree was to be sneered at for advancing the six-form proposition that saying “all the parties are the same”, and people would point to the subtle variations on exactly the same ideological programmes to evidence the wealth of choice offered to the British electorate. In fact, as Žižek (again) pointed out, Blair was actually Britain’s first Thatcherite prime minister (in the same way that Jesus wasn’t a Christian).  In short, you haven’t really got outside the ideological box until you hear someone spit the word “democracy” with the same sarcastic contempt as we always hear used for “socialism” and understand exactly what they mean.

So, it was with all this domestic political fun in mind that I watched Ibsen’s An Enemy of the People as Brecht’s Learning-Play. Theatrically, it’s an absolute blinder of a thing. And could you ask for a better-named venue than Belgrade’s Centre for Cultural Decontamination in which to see it?

The piece takes the form of... Actually, Christ, it’s hard to explain. It’s played in-the-round. Under full house-lights a lot of the time. There are five (or six?) performers, including a keyboard player. A lot of the text is sung. The structure starts out more like a performance lecture, clearly stating why on earth anyone would do Ibsen via Brecht; what a learning play is, and so on. I think a lot of the text is taken from Brecht himself, and from good scholarly work on Ibsen’s theatre. Perhaps thanks to the English of the surtitles, though, it’s also incredibly clearly put. As long as you know what “dialectic” means, you’re laughing. And actually, you’re laughing anyway, because Brecht’s theory set to (ersatz? Real?) Brechtian music is quite an amusing concept anyway.

So, we have these two opposing – if only because of the passage of time – versions of theatre that wants to change the world. And, rather than taking Brecht as a fundamentalist end-point, the piece reclaims some of Ibsen’s strategies through his theory.

The piece does indeed precis the story of An Enemy of the People, although it’s a blessed relief that it pretty much starts at the end, only offers a few of the speeches (one of Stockmann’s brilliantly set to Beethoven/Schiller’s hymn to the Enlightenment in Symphony 9) before veering off to also consider the live relevance of the theory and the narrative on the practice of current Serbian politics, using Brecht’s Marxist theory to unlock/read a live TV interview with the current Serbian President, Tomislav Nikolić, who IN NO WAY had anything to do with encouraging the assassination of the former Serb Prime Minister Zoran Đinđić. The interview is performed by two of the actors, with interjections and a commentary by the others.

Then there is a section where the cast put on clothes worn by Belgrade’s underclass – like, *actual clothes that used to belong to them that they bought off them (I think)* – and tell the stories of these people whose clothes they are now wearing, largely without sentiment, mostly just bare facts. This feels partly like an uncomfortable act of appropriation, but at the same time it feels infinitely more committed to even acknowledging their existence than not doing so. (I think it might feel more ethically tricky in the UK, but even in this context I think I still read it with UK problems, where there may be none.) The actors then perform the last moments of the Ibsen (I think).

It’s a fascinating piece. Not least because, under the guise of talking about theatre-politics and theatre, it actually feels like it completely explodes the idea of theatre on one hand and at the same time constructs this incredibly urgent evocation of the problems of contemporary Serbian politics and society. It also handily blows the complete pantomime of engagement in Ostermeier’s production of Volksfiend sky-high.

Serbia now, of course, is subject to the same sort of neo-liberal overthrow to which apparently every other European country (and beyond) has been subjected. It’s almost a bitter ironic joke that a country still not permitted entry to the EU, thanks to the ongoing dispute regarding Kosovo, has had its economic sovereignty whisked away as surely as Britain has.

On a UK theatre-level, what perhaps interested me most about the piece was the way in which the thing it reminded me of most was the project TORYCORE. The difference here, however – and I think it’s an instructive one which UK companies would find interesting – is that rather than being perceived as reality + music = exorcism/catharsis, I think it uses reality + theory = ? I don’t think you walk out of this feeling exorcised, I think you feel properly politically re-engaged (not that you don’t with TORYCORE).

There’s still something of that hitting-a-brick-wall feeling beyond that, because, well, Christ, how on earth does anyone actually change anything? But this felt like about as effective a way of making you think, hard, about the stuff underpinning left politics as anything I’ve seen. And what those politics need to address. And how far outside the media you need to be thinking to even start. (I know none of this is news to you people, but it did genuinely shock me, even in this short piece, how much underlying ideological stuff we rarely see properly unpicked and destroyed on stage.)
Posted by Andrew Haydon at 15:00