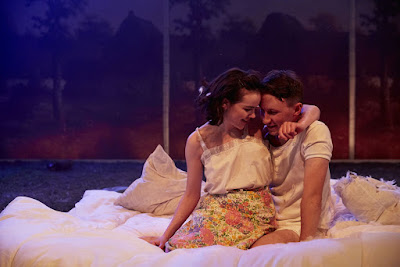 [seen in pen-penultimate preview; written about with kind permission]

And I’m not going to tell you what it is.

[Maybe I’ll fill it in after this run closes, but right now I just want everyone I know to go and see this play.]

Wanting everyone to go and see the thing, and see it with as little information as I had, is a tricky review to write. I’ve already ruined it by saying how great I thought it was. I knew *nothing* except that I like the Yard Theatre and trust them to show me something interesting every time I go, and that I think Miller’s a good director. (I’d go a lot further than “good” now.) I looked at the website to check the time it started, and accidentally read the bit of blurb that said it was about naked teenagers – a very young German soldier and a French girl, in occupied France, in 1944 – and I’ll admit the historical setting nearly put me off, but I went anyway, and THANK GOD I DID.

Anyway, look, just buy a ticket. It’s the best thing on in London at the moment bar none (although I’ve not seen Angels in America). Rest of review under photo, and liable to be spoilery, just so I can actually talk about why it’s good. 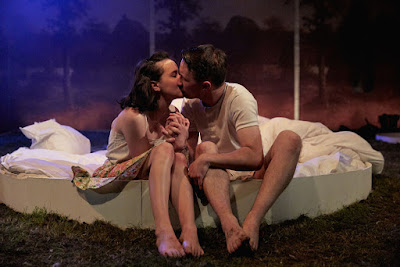 So, yes, the basic facts of This Beautiful Future are that it’s about a very young German soldier, and a similarly young French girl. It’s set in occupied France in 1944. It opens with the young German soldier being excited that his unit have had orders to move in the morning – to invade England, he reckons – so he’s spending one last night with his sweetheart.

Of course, everything about their young, naïve love is overshadowed by what we in the audience know about history (and, for some reason, you kind of know that this isn’t going to be a counterfactual, á la SS GB or similar. There’s a deadly weight to the way that dramatic ironies are allowed to hang in the air).

The first masterstroke here is Cécile Trémolière’s design. On one level, it’s just really simple: a raised circular dais filled with turf, and in the centre a round, nest-like bed filled with duvets and pillows. On the back wall, a stylishly faded view of French (I assume) countryside, repeated on three panels. To the left and right, little glass sound booths (cf. Katie Mitchell, et al), except these ones have karaoke screens in them. Two older performers (Alwyne Taylor and Paul Haley) come on, say hello to us, and enter the karaoke booths.

I genuinely don’t think a design and opening of a play has made me grin so much in ages. Quite apart from anything else, it’s just so assured; you actually trust the people who have made the piece. You feel reassured that you’re watching theatre made by people who also live in the C21st with you, and who might even have seen theatre from mainland Europe. Christopher Nairne’s lighting supports the design work perfectly (and does that frustrating thing of being so supportive, understated, and spot-on that I don’t remember thinking about it once. ARGH.)

The second masterstroke is the language/tone Rita Kalnejais’s script, how it’s been directed by Jay Miller, how it’s performed by Hannah Millward (Elodie) and Bradley Hall (Otto). It feels completely contemporary. Millard especially has absolutely nailed that way that (some) teenage girls talk, the way they inflect their words, the whole shooting match. Similarly, Hall does a sterling job with teenage-boy diffidence – that thing where they seem embarrassed by at least fifty percent of what they’re saying that they seem to be trying to un-say it even as they speak. I’m not suggesting that the performances or the script are a 100% accurate document of precisely what this encounter would have been like (both the performers are speaking contemporary English, after all, and only pretending to be 15 (Otto) and 17 (Elodie)); instead, it’s much more valuable, it transposes the action, pretty much, to now, but leaves the attitudes and expectations of the time in place. It’s relatable and unrelatable simultaneously. They’re us, and not-us. It comments on the now and on the then. As a result, it feels like some of the deftest, most impressive new writing for the stage I’ve seen; supported by performances entirely equal to it, which in turn lift the writing. These performances seem to inhabit both “truthfulness” and “comment on” at the same time.

The third masterstroke is the “karaoke”. (Composer – Jonah Brody, Sound Designer – Josh Anio Grigg.) Firstly, it’s glorious that it’s there at all. I mean, it makes no sense. And yet it makes all the sense in the world. It establishes its own logic just by virtue of being there at all. The songs are neat choices too – from Charles Tenet’s ‘Boum’ to Adele’s ‘Someone Like You’ (although sadly no ‘Horst Wessel Lied’ or similar) – and in brilliant new awful-karaoke meets hipster-electronica arrangements. What’s most curious, though, is the two older performers singing it.

I mean, you go through most of the play assuming they’re probably sort-of the older versions of the characters in the middle of the stage, but by the end you realise that for very real plot reasons this is unlikely to be the case. So who are they? What do they represent? Something like Icke’s Hamlet back-room people? Today (01/05/2017) Otto would be 88 and Elodie would be 90. I wonder if Taylor and Haley are standing in for the-characters-now. Or just pretending to be their near-contemporaries in the modern world (I don’t think Taylor and Haley *are* 88 or 90, but then Millward and Hall aren’t 15 & 17, so we can maybe accept a nod in the general direction of...) There’s something rather beautiful and calming about just their presence, which I don’t think is just a cheap trick or sentimentality.

The play does a seemingly effortless job of dealing with I guess two of the hardest things people ever have to think about: love and war. Or perhaps it’s hope/the future and war. Or maybe just hope and no hope. It’s also play about the naïveté and idealism of youth – even if the idealism here happens to be Nazism, which resonates in so many different directions today (I mean, really, who could have predicted a year ago that a young German Nazi from 1944 would most strongly remind us of the current political situation in Britain, America and France, not to mention Poland, Hungary, Croatia, Slovakia, etc.).

Against his enthusiasm, Elodie’s “Meh, whatever!” optimism is also terrifyingly resonant, as is her fate. (This Beautiful Tomorrow forms pretty much the idea companion piece to The Plague down the road at the Arcola, btw.) Meanwhile, the interplay of what we know, and what each of them knows, manages to stay fresh and engaging, rather than ever descending into the clangingly predictable – instead, our knowing things that one of the other characters knows, draws us further in to wanting to see the other character’s reaction when the truth dawns on them.

But, yes. The whole thing enjoys that kind of rare theatrical alchemy where you reall can’t pin down what the extra thing that’s happened is, but all these seemingly simple parts taken together somehow transform into something huge.

And then there’s the thing at the end, which almost made me cry.

Mostly over the sudden sense of “how the hell do people keep on letting things get so bad?” (“particularly when [redacted]?”) clarified so perfectly here. So, yes. If you see nothing else in a theatre this year, see this, and be amazed and perhaps troubled that people are still making things this beautiful in our horrible, horrible world. 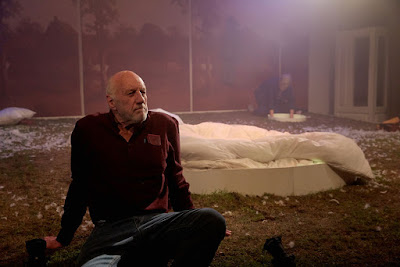