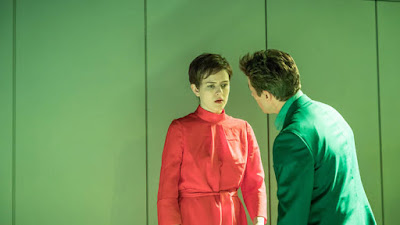 I’ve never seen Martin Crimp’s The Treatment before (although I did read it in about 1999). I’m reasonably convinced it’s a pretty good play. I was less entirely convinced by Lyndsey Turner’s new production of it.

I’ll be honest and say straight away that I didn’t really get on with Giles Cadle’s set – essentially three flat/flatly-panelled grey walls (left, right, back), with removable/sliding sections which can change to suggest different locations (an anonymous office, a section of back-street, a Japanese restaurant, a metro station). I get that they are about an abstract idea of anonymity and placelessness, and I even get that their artificiality might be about highlighting the phoniness of the world in which the anti-heroine, Ann, finds herself. I get, also, that Neil Austin’s lighting is meant [by turns?] to be flattening, or sickening, or ironic. (We might even try to argue that they tie in to the similar aesthetic employed by Turner’s last Almeida piece, Chimerica; but that seems a red herring, and rather unfair on Es Devlin’s more interesting revolving cube.) Understanding why a thing might look a certain way doesn’t make it easier to look at or enjoy, though.

There are also the leisurely inter-scene blackouts. Sure, they play music and a video of the inside of a New York taxi driving through the rainy, blurry streets at night is nice enough (even if it took me a while to grasp its (possible) not-very-significant significance – there is a blind taxi driver in the play). In theory, I don’t mind these. In practice, by the second half, they feel like they’re rather sapping the pace of the piece. Fine. Let’s assume that’s an artistic decision. It’s not one I especially agree with, and I’d argue it doesn’t particularly fit with what happens between the blackouts.

The style is interesting. I mean, let’s be honest, as writers go, Crimp is pretty much the best living playwright at railroading actors into doing things how he wants them done, essentially by leaving very little conceivable alternative. I imagine there *are* other ways of performing a Crimp script – even in English – but I don’t think I’ve seen them done (cf. Glenn Gould’s Jazz Bach). And yet, even inside this apparently prescriptively rhythmic style, there’s a lot of room for manoeuvre. Here it’s being done with American accents (fair enough, the play *is* set in New York, it seems), but even this feels like it could be a mistake. I can’t think of a better argument for a play being performed in RP than claiming it’s “just an accent” – here standing in for American. Which would actually serve the sense of strangeness and dislocation far better than pretend accents. It’s odd what gets questioned and what doesn’t (although, I have no idea if it wasn’t questioned. Perhaps they tried it and decided that the idea I’ve just floated – off the top of my head – was nonsense).

Oh, you want to know what the play’s about? Right. In the first scene, Anne (Aisling Loftus) is telling a story of something that happened to her to two studio executives (Jennifer – Indira Varma and Andrew – Julian Ovenden). [The play is from 1993. This scene finds its apotheosis in A Triumph of Love and Ideology in 1997’s Attempts on Her Life.] Basically, Anne tries to tell them “the truth” and they keep on interjecting with how it might be improved upon. They take her to a fancy restaurant (off broadway?) and Andrew tells her he loves her and not to tell his wife, who turns out to be Jennifer. Elsewhere, there’s a blind cab-driver (Ben Onwukwe), and a senior writer (Clifford – Ian Gelder) (“I had two hits on Broadway in the sixties!”) who’s written a properly brilliant/hilarious mad-sounding script about a couple who discover someone watching them having sex and employ him to carry on. These elements all seem to dance around each other, and intersect in unexpected and perhaps significant places.

The performances feel like a mixed bunch too (although perhaps that’s true enough of life too. Perhaps people do all sometimes feel like they come from different worlds, and behave as if it’s inconceivable that they should all be in the same room, much less of the same species). Personally, I could have lived without everyone doing an accent. They’re almost all distracting here, for both audience and – seemingly – actors. They give the whole an am-dram-y feel. Indira Varma probably fares best, being completely on top of her character and lines. Ovenden as her husband perhaps worst – at least, I found it hardest to get a fix on who he thought he was or what he thought he was doing. Although it felt like his and Jennifers’s relationship suffered badly for not seeming pinned down. Sure, his is the hardest part – having to suddenly tell Ann that he loves her, having to suddenly seduce/be seduced, having to negotiate his wife apparently knowing all this – but it seems like an error to have him played as a blank or a cipher. Similarly, while Ian Gelder as the writer manages to find *a thing* to do with his character, Gary Beadle as the lead actor is initially great, but delivers his final speech in a jovial fashion that didn’t convince me.

All that said, I’m not entirely sure the production is wholly to blame. I do wonder if the play hasn’t entered that difficult window where he recent past feels far more remote to us than 100 years ago does. Like, the specifics just feel too dated for it to be contemporary any more (where are the smart phones? Where is the digital technology? The Black Lives Matter and #OscarsSoWhite movements?), but not distant enough for it just to be history, and let us pick up what we may about humanity’s common threads from the past. Sure the themes are dimly present, but the packaging either needs updating, or placing very specifically in the early nineties.

Being dimly aware that all the other reviews (Stage, Guardian, WhatsOnStage, Time Out) have like the thing, I just nipped out to have a look at them. Frankly, I disagree with Billington and Crompton about the relevance, but more, what the play is even about – it really isn’t *about* the movie industry. Maybe it’s about a certain contempt for American films (or just films), which purport to tell “real life stories,” but beyond this, there’s possibly the French semiologist’s contempt for the concept of “reality” at all (the play is contemporaneous to Baudrillard’s The Gulf War Did Not Take Place, itself a play on the title of Giradoux’s play La guerre de Troie n'aura pas lieu).

I mean, sure, taking a wider view, this is absolutely the play for now, what with America being led by man whose own grasp on reality would make even Baudrillard think twice about being clever about it ever again, but those resonances really didn’t hit me at all during the production.

Maybe I was just a bit dozy – and I’m certainly disconcerted that Michael Billington likes a production of a Martin Crimp play more than I do – but perhaps that’s the problem. If Michael *is* happy with it, because to him it seems to have confirmed some pretty pat ideas abut the movie industry – and maybe, beyond that, an even more specious sense that America Is The Movies – then maybe that’s why I didn’t buy into it so much.

In common with Martin Amis’s Money – that other essential Englishman’s-take-on-Movieland narrative – it’s very hard to believe the characters as *real*. I don’t suppose we’re really meant to, but for me their unreality seemed too formless and adrift. The rhythm of the thing seemed skew-whiff. Not in an exciting, Lynchian way, but just like the production hadn’t found its stride (quite a few moments of this production confirm a production that has only just overcome some serious technical issues). I wish I was seeing it again in a few weeks time when it has had time to bed in, and when I’ve got used to what it was going to look like and act like. I dare say, second time around, I might quite like it. And it still whizzed by, which is always a good sign. But, yes, currently less impressed than my learned colleagues.