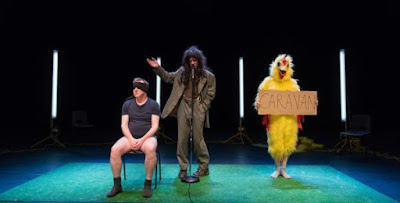 or, How to Explain Real Magic to Kate Wyver

Like everyone else, I really liked your review of Real Magic. It’s funny. It reflects an experience we’ve all had at some point or other. And, more than that, it still manages to give a not-inaccurate impression of the show. So much so, that I’m almost tempted to believe that the face value of your text isn’t 100% true. But let’s assume it is; that you didn’t get it (x100, with slight variations on not getting it). This piece is an attempt to help, if you felt discomforted or annoyed by not getting it. (Please feel free to ignore, or dismiss this, if you weren’t.)

Context: I first saw a piece by Forced Entertainment 19 years ago. It was called Pleasure, I think, and I saw it in the (now closed) studio theatre at Leeds Met when I was a student at Leeds Uni, and the Met Studio was where we went to see the cutting-edge, slightly famous, slightly obscure stuff, that we’d still somehow managed to hear vague rumours about. This was pretty much before the internet. It was certainly before Google. And it was definitely before there was anything useful about theatre (or Live Art, or “performance”, or whatever) on the internet. Not that you could find, anyway.

I flat-out didn’t get Pleasure. *At all*. I vividly remember a lot of the elements of that show: a bloke wearing a funny horse’s head mask, a chalk-board with random words written on it, a record player playing a record at the wrong speed, cardboard signs, someone talking into a microphone (also slowed down?). But I had absolutely no map for how to put any of those elements together for myself. I was 21/22 (or so). Blasted was a year old (and I’d only read it). Simon Stephens was an unpublished graduate playwright writing hopeful letters to Mel Kenyon, Mike Bartlett was studying for his GCSEs. I was studying BA Eng.Lit. and taking the odd module in theatre here and there. The most recent play-text I studied was by Arrabel, or Ionesco, or Genet. (As recent then as Our Country’s Good is now), which might have been more use in this context if I’d really grasped what they were driving at then, or seen a stark linear connection between what those authors and this theatre company were up to. But I didn’t. So I didn’t get it. And I don’t think I saw anything else by Forced Entertainment for the next decade or so, having possibly/subliminally filed them as “absolutely beyond me” in the theatre-ticket-buying/requesting bit of my brain.

When I did next see them (and I have no idea what/when this could have been), a lot of things had happened. I’d seen *a lot more stuff*; I'd seen Live Art, contemporary dance, installation work, durational work, German theatre, Belgian theatre, student dance... Frankly, I’d seen stuff that made Forced Entertainment look as familiar, comfy, and middle-of-the-artistic-road as a play by Alan Bennett. (And, in a way, I kind of think that’s how they should feel to people now. I mean this in a nice way, Forced Entertainment.)

But more important than that, I’d been given a (possible) strategic key as to how to approach their work. Not specifically them, but it works for me. The most helpful thing I’ve ever heard anyone say with regard to this sort of work, and how to “get it” though was Matt Fenton (now artistic director of Contact, Manchester), who in 2004 was a selector at NSDF, explaining the how/what/why of some piece of student contemporary dance that he’d selected for the National Student Drama Festival, which had just been presented to a festival full of perplexed student drama types. He said – and I’m having to paraphrase horribly here, the original was much more elegant: “I find it helpful to think of it in terms of jazz (improvisations?).” I think he managed to expand on how one could relate to jazz better than I’m going to do, but that idea of the freedom of interpretation, the freedom to dip in and out of something, the framing of the work in terms of another artform, have all been crucial to how I’ve approached non-linear, or abstract work ever since.

The term “live art” is also really helpful. When you think about art, say; a Rothko, you don’t (I don’t) worry about “understanding” its precise meaning. Thousands upon thousands of people go to the Tate Modern a year and quite like looking at the Rothkos, I think. And they get something from them. And they don’t all get the same thing. But Rothko’s popularity is such that clearly a lot of people find what they get out of his paintings rewarding. We know it’s ok to get “a feeling” from it. We can think of Forced Entertainment as Art in the same way. Instead of using paint and canvas, they use human bodies, lights, sound, and words. (There’s as thing where we could think of a lot more theatre *as Art,* as they do here in Germany, and it would result in a very different-looking theatre scene, as indeed it has here in Deutschland. Or in Norway, where FE won the Ibsen prize.)

The basic situation in Real Magic is clear: there are three performers – Richard, Clare and Jerry – in a semi-circle of vertical lighting bars, on a small strip of astroturf – and they are playing a kind of quiz show, or magic show. One is the host, one has to the think of a word, and the other has to guess what the word is. The words are written on scrappy pieces of cardboard. There are only three words it could be (Caravan, Sausage, Algebra), and the contestant always makes the same three wrong guesses (Electricity, Hole, Money). The host’s patter is pretty much the same throughout: “What’s your name?” “What’s your name” “Have we ever met before?” “Have you ever met before?” “Can you think of a word?” “Do you feel ready?” “Do you feel safe?” “Not too safe?” “What’s your first guess?” “Is that the word you were thinking of?” “Shall we let him/her have another go?” “What’s your second guess?” and so on.

The piece lasts about 1hr20.

As such, this one simple scene repeats over and over again, with various tonal variations. There are subtle shifts of lighting. There is a repeated applause track (repeated ad absurdum), a repeated laughter track (ditto), even a scrape-y rendition of some Bach(?) (which I’m sure I’ve heard used in something else too. What is it?). They do it fast. They do it slow. But what’s most striking is the near-certainty – rapidly established – that they’ll do it again.

So what *do* you do with all this?

Well, here’s some of the stuff that I got from it: it reminds you of *all the quiz shows that were ever on*. The cadences of anyone from Jim Bowen to Alexander Armstrong, via Chris Tarrant and Noel Edmonds all seem to be invoked. Despite (or perhaps because of) seeing it in Berlin, the thing feels peculiarly “British” – stale smoke in brown wallpapered 70s pubs, right through to the overbright colours of today’s HD TVs. But perhaps all quiz shows in every language have those cadences.

Of course, Real Magic isn’t really “a quiz”. And this also seems key. It’s “magic”. Or it would be, if the contestant in this mad gameshow ever got it right. You are perhaps also reminded of those strange TV psychic programmes. Or maybe of Derren Brown.

Then there’s the small amount of text, and th amount of time you have to think about it. I quite loved that the contestant always wanted “electricity, a hole, money” and all there was was “Caravan, Sausages, Algebra”. If that’s not the perfect description of the disappointments of growing up English, I don’t know what is. You could even (over-) read the former list as abstractions of light, warmth, shelter, and the means to obtain sustenance, a symbol of being valued within modern capitalism, while the latter list is a kind of shabby concretisation of the same things. The reality confronting the dream, if you like. So there’s this mismatch between expectation and reality. But then there’s also the expectation of success against the (apparent) inevitability of failure.

Then there is the skill with which the company play with – bluntly – what’s bearable to watch. I would argue that the thing feels pretty carefully calibrated to keep a willing audience pretty much on board. There’s the simulation (the risk, even the threat) of utter tedium, but it never properly materialises. The constant variations in tone and pace, combinations of performers and even changes of costume (basically vest and pants or chicken suit, there’s also a suit knocking about) keep it consistently, perversely compelling. I find the company’s adeptness at performing, and the clear amount of thought and pre-planning that has gone into the piece enormously reassuring. I think a concern that (wary) “people” have with this sort of work is that, on some level, a joke is being played on them. Forced Entertainment are reassuring; if for no other reason than they’re having to put more effort into playing the joke on us, than we are into it being played on us. At which point; the joke is on them, we’re all in it together, or we needn’t worry about being tricked at all.

Another thing I got from the thing – harking back to those French absurdists (et al.) that I studied at university – was how much it made sense as, say, a descendant of Genet, of Ionesco, of Beckett (even, in places, of Pinter). The sense of figures doomed to spend an eternity repeating the same meaningless reflection of life’s meaninglessness, even futility.

At the same time, I also found it very funny. There’s probably a lot to say about the sheer value of just this by itself.

Anyway. This is already too long.

But, as a short conclusion: I reckon, there’s nothing to “get”, per se, but that’s what I got.

Hope that’s useful in some way?