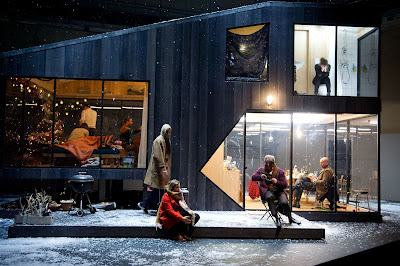 The central problem with Simon Stone’s new production of Three Sisters for Theater Basel is working out the best position from which to attack it. (You know Simon Stone, he did that awful Yerma for the Young Vic, which won loads of awards.) It’s not that the production itself is unassailable – far from it – it’s just that every possible direction of attack needs careful qualifying, lest the attack be mistaken for the sort of reactionary rubbish that usually gets said in the British press when someone does something modern to Chekhov.


You could start by attacking the production for itself being artistically reactionary: I mean, I thought Yerma was pretty ordinary, but I could at least see what it was that other people admired about it. While the acting wasn’t my cup of tea, you could see that Billie Piper was giving it full-throttle; in the small confines of the remodelled Young Vic main space, she achieved a certain intensity. In the main house of Berliner Festspiele we’re looking a a full-size modernist Swiss chalet – all angular pine and glass – revolving in the middle of a large stage, but trying to function in exactly the same way. Like Yerma, all the actors are radio miked, but from row 9, this means that you’re essentially listening to a radio drama, playing on high-up speakers above the stage, while some performers potter about in a revolving glass house far below.

Does the realistic glass house, with its detailed interiors, remind you of what Thomas Ostermeier was doing over a decade ago? It certainly does! Hell, its the sort of thing even the National Theatre of GB would put on stage – although you imagine that they would have a problem with radio miked actors completely cut off from the audience by more-or-less soundproof glass. But that doesn’t make the sound design radical, it makes it feel like an oversight.

So, what does the production offer? A realistic house and unrealistic sound. Meh. The acting is interesting. Better than much English acting, in that people talk over each other; worse than almost all English acting, because when people are called on to convincingly simulate heightened emotions (as sometimes happens in naturalistic productions of naturalistic plays) the actors are not terribly accurate in their portrayals of these emotions. Which seems odd in something that seems to have taken such pains with its naturalism.


You can attack it for what it’s done to poor old Chekhov: but this is where you risk sounding like a massive reactionary yourself. So, it’s important to explain: I *really* don’t have a problem with directors radically remaking Three Sisters. But this really isn’t that. As per Stone’s established M.O., this is *something like the plot of Three Sisters – albeit with a load of characters cut – with dialogue improvised by the cast*. It is no particular surprise that the cast have failed to come up with new dialogue that’s remotely good. So, what we’ve got instead is literally: three sisters, some modern-day versions of their partners and some other people. Talking. There are some similar affairs, although the soldiers have all been taken out, so Tuzenbach (here called Bruce, or something) has to shoot himself at the end.

Being scrupulously fair, there is maybe one moment where it works. Some character – it really was impossible to bother keeping track of who was talking, but it was one of the male ones – talks about the current situation of the world, with Trump, and Brexit, and etc. etc., and the whole audience actually woke up a bit. You could feel the quality of attention in the room shift. That one bit was then completely sabotaged by a drearily predictable attack on the baby-boomer generation from someone else, and then the conversation drifted off elsewhere on stage, and the audience went back to not really listening...

Elsewhere, there was a bit where a couple of the blokes played/sang Bowie’s ‘Heroes’ (cf. Ostermeier’s Enemy of the People, Icke’s Ivanov), which a) felt tropey as hell, b) felt completely unearned, c) made me want to punch Stone in the face for thinking he’d made anything that deserved to use ‘Heroes’, d) oh, just fuck off.

Oh! And the house that’s kind of the crux of Three Sisters is now a holiday chalet. The three sisters don’t live there; they just go for skiing holidays there sometimes. They’re used to jetting off “to Berlin to take ecstasy all weekend” (more fuck off), so: a) they’re not stuck, b) the house doesn’t mean anything to them, c) they don’t really seem particularly *troubled* by any *problems,* d) by this point in the list, I genuinely don’t know why Simon Stone thinks Three Sisters is a play worth doing at all. It’s pretty fucking obvious that he doesn’t understand it, and – for the avoidance of all doubt – what he’s replaced Three Sisters with is total crap. I wouldn’t be grumbling if he’d replaced it with something halfway good, but he’s replaced it with 2hrs30 of Sex and the City (or something). Without the jokes.


You can attack it for its misogyny: In. So. Many. Ways. Let’s start with the title – even though, in the original, there are a lot more blokes knocking about than here, you do get that it is a play about three women. Stone’s adaptation achieves the rare distinction of taking out a load of male characters, and *still* managing to make his production more about the remaining men. I mean, really he should have retitled it it Some Men (who happen to know three sisters). Predictably, Andrey seems way more important to Stone than any of his siblings.

Then there’s what’s been done with Natasha. I mean, the original is pretty uncharitable to her, but here she’s an unbearable cartoon. Not cleverly done either. The only possible defence is that Stone (erroneously) sees her as a Trump figure (there’s textual support for that reading in a throwaway comment she makes at the end), but really it feels like naked contempt for women of a certain social class. And not by the sisters, but by the director.

Then there’s the reappearance of the “women all go crazy when they can’t have babies” trope, that he made a whole Yerma out of. I mean, *that isn’t even a thing in Three Sisters,* so your ears do prick up a bit when someone mentions it here. Especially after that FT interview Stone did, where he explained he understood women perfectly because he’d once had a relationship with one.

Similarly, the redaction of a rival for Irina’s hand-in-marriage, and Bruce’s subsequent suicide (subsequent, as depicted here, where it does seem to be brute cause and effect), could certainly be painted as further evidence of the dim view of women taken by Stone. I’m not sure I’d go that far, but overall the reduced roles, the reduced inner lives, the reduced capacity of anything for us to hang on to, is pretty damning. This is basically a play about Andrey the addict now.


You can certainly question its inclusion in the programme of Theatertreffen’17: I have literally no idea what it was about this show that appealed to the jury. Particularly as “extraordinary”. It’s the most ordinary thing in the world. And so familiar too. (Again, I’ve nothing against artists quoting other artists, but this is simply old ideas, not even reheated or integrated.) But even here it feels like you have to mount a defence of your reasoning: look, it’s really, really ordinary. You’re just going to have to trust me here. There’s no “in principle” arguing to be done. At the end of the day, there’s nothing at a conceptual level that couldn’t have worked in other circumstances, but nothing that did work in these specific circumstances (at least, not exceptionally – it’s *fine,* but deeply ordinary. And also quite horrible).


Perhaps the best defence of the play is that it is *intended* as an anti-art irritant. In which case, success! It destroys Three Sisters (let’s not give them the satisfaction of saying “which used to be a rather beautiful play”), it replaces it with a corrosive non-entity of a new play (I was very strongly reminded of The Priory – possibly the single worst (professionally produced) play I’ve ever seen at the Royal Court, or anywhere), and then it puts it on stage in a staging that “will do” (at best). Perhaps all this is intended of a critique of theatre, of the audience, of the original, of something. A kind of “the world is horrible, so you can’t have nice things” gesture. This at least makes sense of it. But I fear it isn’t that at all. Rather, just mediocre work by a director with exceptionally banal sensibilities.


(oh, and extra points docked for trying to co-opt The Cure into the whole soggy mess)

[will re-upload proper Cure version when not in bloody Germany, which has got all of YouTube blocked...]
Posted by Andrew Haydon at 17:04

When you say the way actors talk over each other makes it '[b]etter than much English acting', does 'better' mean 'more natural'? As in, would you say that the acting styles of Mitteleuropa (an impossibly broad area, I know) are generally more natural than Anglo-American naturalism with all their confusions and hiccups? Or is 'more real' a better descriptor? I read on Dispositio that he thinks an awareness of artifice can make a thing more natural—is that what you mean by 'better'?