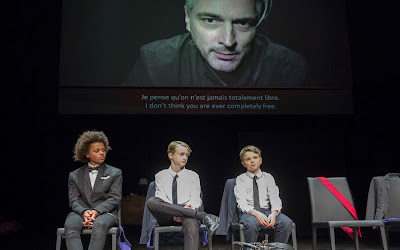 As you perhaps already know, the headline here is that Five Easy Pieces is a piece about the life and crimes of Belgian paedophile and child murderer Marc Dutroux, performed by seven children. [And one adult – Peter Seynaeve – who tends to get overlooked by the headline, but deserves recognition – not least as Belgium’s premier silver-haired David Tennant look-&-charisma-alike – but also a bloody amazing performer in his own right; just the right mix of funny, sardonic, reassuring and unsettling.]

It opens with a sort of Q&A with the young performers. What's their name? How old are they? Etc. *Of course,* knowing the piece’s subject, this can’t help but acquire overtones. Deliberately, I’m sure. At the same time, Seynaeve asking the questions is also allowed to project something of himself (or at least an assumed adult persona) into proceedings. So, not only is there the suggestion of something sinister, but there’s also the usual adult-as-authority-figure. *And* the adult as person-in-their-own-right who wrinkles his nose at the idea of Rhianna being his first interviewee’s singer of choice, but who is wryly amused that her second choice is John Lennon. He also asks her if she can identify the man in the photo. It is Patrice Lumumba, the complex hero of Congolese independence. She can. (It is neatly contrived that she is also Afro/European mixed race, allowing her to also answer questions about how she perceives her identify.)

How does Congolese independence impact on the Marc Dutroux case? The first character we see interviewed in the play – the first of the “Easy Pieces” (the title itself a steal from Stravinsky, but Rau’s performance does also follow a five-act structure) – is Marc Dutroux’s father. Played, yes, by a child wearing old-man make up. The interview is performed to-camera, and live-projected onto a screen the semi-dominates the stage (not as much as one of Katie Mitchell’s, it’s all on a much smaller scale than that).

The first thing to say is just how incredible the child’s performance is. I mean, really. Really incredible. You forget that you’re even watching an actor, let alone a child. But then, the situation itself is remarkable, the situation being described – being the father of a child-murderer – is remarkable (not “Easy”). Dutroux’s father really doesn’t seem “to blame” at all. Yes, Dutroux spent his childhood in the Congo, because it “belonged to Belgium” at the time, and Belgians lived and worked there. That’s not Dutroux’s father’s fault. Indeed, his father reflects that he always thought the situation was unfair, even as he describes how he had “an affair” with a Congolese woman. He also describes how apparently effortless it was for white men to have affairs with Congolese women; in rather the same way that President Trump described how easy it was for him to attract women.

But in the theatre, you’re there watching this interview with the father of Marc Dutroux, played by a child, wearing this overdone “old” make-up that, like John Gielgud or someone would have used to play King Lear in the 1940s. So you have about three or four different levels of “reality” to cope with: the reality of the father, the reality of the child, the reality of the acting talent, and the division of attention between live performance and screen... It’s easy enough to rationalise all the various levels that you see, but having to continually readjust your understanding of what’s real in such a set-up feels like an incredibly important part of the whole. This is theatre that forces you to think, and to deconstruct and reconstruct the way you’re watching it, in a way that produces a critical response and political thought.

In the preliminary interviews with the child actors there is also a lot of talk about acting, which continues throughout. Their views on what “acting” is are elicited. It struck me there that what was also interesting was these Belgian children’s ideas about acting would naturally be different to those of a German audience, and different again to the default English position on the subject. Although the best/most memorable answer “it’s like puppet theatre, but with real people” seems both chilling (in context), but also unlike something any English child would think of (because puppet theatre is hardly a go-to example for anything here, right?).

The piece does also play with ideas of appropriateness and consent. There is one scene where the director figure asks a nine-year-old girl to undress for the part she’s playing in front of the camera. There is absolutely nothing wrong with what happens, or with what we’re shown, but at the same time, it brilliantly demonstrates another strand of the piece’s concerns – namely that even making this piece is somehow wrong, and by extension the entire director-actor dynamic (in any theatre production) can be seen as suspect. And in the background we have the spectre of European colonialism, and the of child rape and murder.

Of course, the piece isn’t suggesting anything as crass as “Belgian colonialism made a child-murderer of Marc Dutroux” (although it doesn’t deny it, but logically it’s no kind of point to make), it does, however, cause you to realise the level of similarity between the narcissistic desires of a child-murderer and paedophile, and those of an imperialist power; the arrested-development of a mind, or a culture, that allows it just to say “I want” and to take that thing and keep it in captivity.

As a whole, the piece is outstanding – lifetime top-five outstanding – in the same way that This Beautiful Future is outstanding, in fact. Primarily because (ironically, narcissistically) you have done so much of the work in making meaning. The things with which we are presented are impressive. A child playing Eric Satie well is impressive. A child somehow managing to snap out of a fit of the giggles, straighten their face, and play a chief of police with uncanny precision is impressive. A piece of theatre managing in 1hr30 to eviscerate Belgian (+ by extension, European) society, its colonial past, its hypocrisy, and so on, is impressive. But what makes you dizzy – and what ultimately makes the piece extraordinary – is the synaptic effort of putting it all together in your head.

What the piece somehow really brings home is not that child murder is bad, and sad, and upsetting, but how inequality is. You come out with the profound realisation that essentially any country, any society, any government that lets children (or anyone) live in poverty is every bit as a bad a paedophile child-murderer. You get an understanding that all the confected outrage about child murder (or affected boredom at this piece of theatre) by papers like the Daily Mail, is part of a much wider distraction from the fact that most of the world is essentially like this. That most power relations are like this. That school, army, church and police are like this. That the purposeful uneven distribution of wealth is like this. That raping and murdering children isn’t so much an exception to-, but a logical manifestation of the learned models of-, how society operates.

By showing us some sentimentally appealing, charming, “cute” children, Five Easy Pieces ultimately shows us how the system we live in is completely abusive from start to finish. How, by focussing obsessively on the need to bring one man to justice, society is distracted from any questions of actual justice in any meaningful sense.