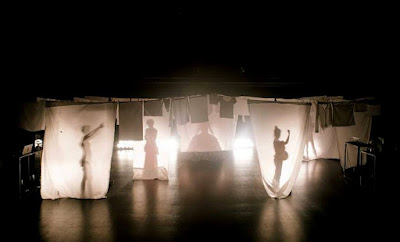 Those whom the gods wish to destroy, they grant them their wishes... Playing as part of the “off-programme,” Swoosh Lieu (best name for a theatre company ever?)’s Who Cares? comes across rather as if all the missing feminism from Simon Stone’s Three Sisters and Kay Voges’s Borderline Procession had been squirrelled away and all saved up to be staged together in one piece. And here’s that piece.

Swoosh... are a new, young company. Very new and VERY young. NSDF-eligible young. As such, it feels slightly unfair to bring the full force of whatever irritation I might have entertained during Who Cares? to bring directly to bear on the piece. It was late. And the piece *is* full of indisputable true things about how women are treated/perceived/oppressed/maligned by the world. So: free pass.

The fact that I’ve seen this very piece pretty much every year since I started going to the theatre doesn’t make it a bad piece. It probably just makes me the wrong person to review it. Certainly not the person to champion it.

In case you’re wondering, that piece is a kind of melange of devised/verbatim/installation/headphones/video projection/several-minutes-of-half-assed-Top-Girls-alike-bit (featuring the Three Sisters, Medea, Antigone, etc. etc..)

The technological elements have changed over time. The pan-historical costumes (the virgin mary, some Renaissance lady, Marlene Dietrich-type in a top hat, that woman off that poster, and some modern female archetype that felt instantly recognisable – short hair, club clothing – but non-specific...) and layers and layers of white washing being hung out have not.

So, yes. I saw this. It existed. What it said was still urgent. The theatrical case it made for saying it, not so much.

[Possible doubt: I’m now so tuned-out of Berlin/postdramatic-theatre that this was possibly a masterpiece and I missed it because I’ve gone all English in my desire for “entertainment” or “narrative” or “satisfaction” or something.]

On the other hand... 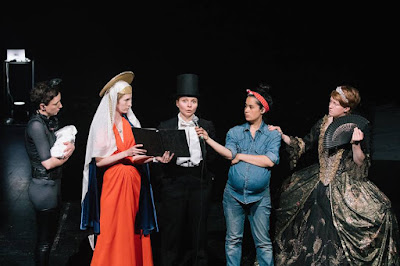 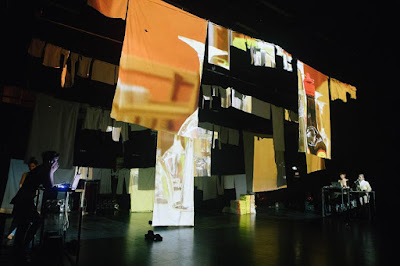