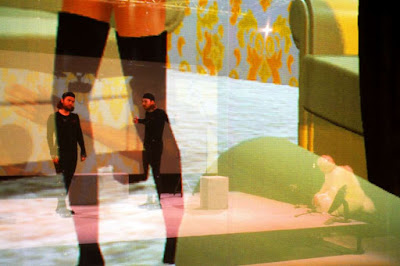 “Reviewing” Urland und Crew’s EXPLORER/Prometheus Unbound seems a fairly futile exercise, since the piece in its current form feels, on one level, more like note towards a scratch performance. Or perhaps a series of demonstrations of what their undoubtedly marvellous technology can do.

Or perhaps that’s just the form of the piece and I shouldn’t be allowing myself to be sidetracked by the fact that it’s designed to feel precisely like those things, but is in fact a thoroughly considered, “finished” article.

In either case, what happens (roughly) is this: a bloke with white hair welcomes us to the performance and introduces us to the narrator, the musician and “the guy who works for him”, who are seated along a table covered in technological equipment. The bloke with white hair isn’t speaking, it’s the narrator. Then two (male) performers are introduced (the number of women visibly involved in this production is nil). They are wearing those black suits with infra-red points on them that allow the wearers’ movements to be tracked/plotted by one of those computer programmes, like what Andy Serkis is always doing in Hollywood... (Or, y’know, like Benedict Cumberbatch wears when he’s playing a dragon.)

A large gauze rises (is winched up) in front of the stage, and the two men are projected onto it, rendered as Virtual Reality-style characters – Bridget and Deacon. Bridget looks (and dresses) like Lara Croft, Deacon looks like, IDK, a stock “male” computer game antagonist, all broad shoulders, muscles, and tight t-shirt. They are both voiced by The Narrator; Bridget by means of a voice modulator that makes him sound all chipmunk-squeaky, and Deacon by much the same means, except deeper, and with an American accent (although I guess that is the bloke, not the machine).

[So, yeah, its feminism isn’t super (see photo, top). In the piece’s possible defence, it is (probably) only describing (and almost certainly satirising) the current(/past) state of online, rather than actively endorsing it. Sure, it’d be better if it wasn’t an all male ensemble – with an attendant sense of boys and their toys – but I don’t cavil at every all-female ensemble, and blokes can be allowed their R&D shed-time too, right? ] [checking the credits, both producers have female names]

There’s an interesting bit at the end where the narrator keeps repeating “Form is nothing, form is nothing”. This is particularly ironic in a piece where *content* has been nothing as well. I think he’s quoting from a Timothy Leary book from 1994. Main introduce-y bloke is certainly one of those baby-boomer that Simon Stone warned us about. Indeed, there is a residual sense that this is a bunch of refugees from the hippy sixties who have somehow contrived to get hold of a lot of impressive tech.

Is form nothing? It’s a bold proposition to table in relation to this piece. Because, formally, on one level it’s still absolutely “just theatre”. We, the audience, are seated silently in a rake facing a stage (albeit a stage behind a screen). There are disconnects between image and performer, and character and voice. (And even between locations, once the thing really gets going, planting the avatars in virtual rooms, on virtual beaches, and eventually – in stripped down, increasingly abstract forms – on a seemingly infinite, brick-textured plain.) Startlingly so, in fact – it’s remarkable how quickly you can get sucked into the cartoon-like reality and forget that you can also see how it’s being constructed.

All that said, it would have been nice if they’d thought about the content *a bit more*. It’s fine. It’s mildly amusing, and it serves its meta-, illustrative purpose well enough. But given that the thing is 1hr20, it could really have done a lot more. And so could the computer animations.

Basically, this is a very fine Beta version of a technique in its infancy – at least as far as its use in live theatre is concerned. One day, I can imagine looking back on this piece, after I’ve just seen a virtual-live Ring Cycle, and smiling at how naïve things used to be back in 2017. I mean, this is clearly game-changing stuff. Not this show, but this tech, will one day knock our technophile socks off in the same way as The Encounter or War Horse... But form is not nothing. And, as per War Horse, technologies (even ones as “simple” as puppetry), need nurturing and an intelligent, purposeful context in which to flourish. 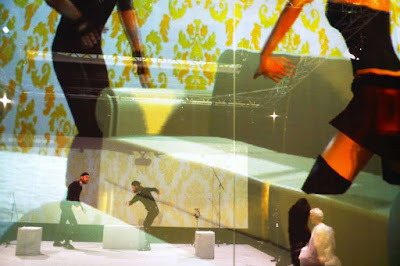 [post-script: OH! It’s by Eric Joris. Whose O_Rex I saw a decade ago at SpielArt. And was pretty much the same shtick:
...Zlatko is told that the helmet has video cameras on it, which feed into the screen inside the helmet. In fact, what he is shown is the video feed from an entirely separate set of cameras, elsewhere in the building - or perhaps pre-recorded (or both, it wasn’t entirely clear).
For the rest of the piece, Zlatko wanders around the stage lost in a virtual world, while the compere talks to him, sketching out a sort of memory/dream sequence for this lost Oedipus. It is fascinating stuff - perhaps most especially for Zlatko - but it is also limited.
In spite of the extra visual elements on stage - laptops on remote controlled cars showing video sequences of crawling men and body parts - and the occasional live soundscapes provided by a female singer, there is nowhere near enough content to justify the length of time...]