Just a bit of context for the following story:

POLAND/KRAKOW Following a competition announced in March, the Polish Ministry of Culture and National Heritage has announced that Marek Mikos is to take over as general director of Krakow’s Stary (Old) Theatre from Jan Klata, one of the country’s most successful (and most controversial) directors, whose contract ends in August. Klata had been one of seven applicants for his own post. Mikos is a theatre critic and his most high-profile previous managerial experience is running a local TV station in Kielce.

From my colleague Witold Mrozek, theatre critic of Gazeta Wyborcza:

“They should also mention that more than ninety Polish theatre directors of all generations protested against Mikos’s nomination; that he is perceived as political officer of right-wing, nationalistic ministry of culture; that it is the first general-director nomination, when the voice of the artistic team was completely ignored. Even the Communist Party negotiated these kind of decisions with artists, the current Minister of Culture does not.”

This is the latest in a string of government interventions into the country’s theatres – see also: the ongoing attempts to prosecute Teatr Powszeceny for Olivier Frljić’s production of Klątwa, and the governmental de-funding of the Malta Festival, Poznań, for appointing him as a guest curator. Beyond this, it appears that every time an artistic directorship becomes vacant, the nationalist, theocratic Law and Justice Party ensure that a party stooge is given the job.

Just thought this information was worth adding to the rather neutral original report.

This evening in front of Teatr Powszechny before the performance of Klątwa:

“This is not a shot of football fans celebrating, nor is it the unions protesting against government. No, this is a protest by Nazis in front of Teatr Powszechny. Today. In Warsaw. In the middle of Europe. With antisemitic slogans and songs, flares thrown at the building, and a vial of something thrown into foyer. And this is a legal protest, authorised in a court of law. How far we are from another Kristalnacht?” – Grzegorz Reske 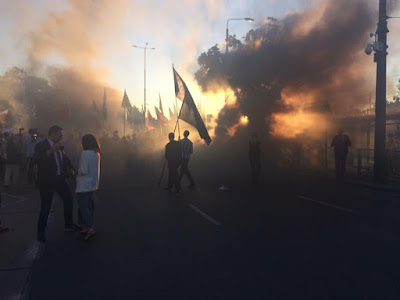 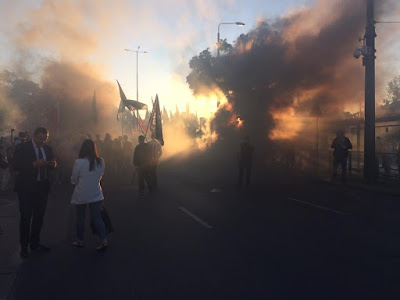 If this was America it would be on the front of The Stage. Why not Poland?