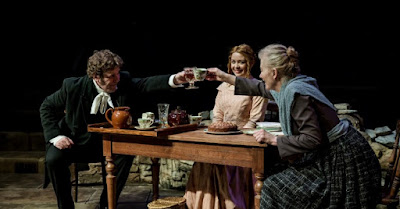 [I was asked if I could review The Tenant of Wildfell Hall for The Stage when it opened in York. It so happened that I could not. I did see it with the Greater Manchester New Critics Group on Tuesday night, though. I wonder if The Stage would have printed what I thought*...]


If there’s a problem with The Tradition of English Theatre Criticism [aside from its current infatuation with 250-word wordcounts] it is the imperative to be “fair;” to assess the piece of theatre “on its own terms.” It is therefore impossible to write the following review:

“Elizabeth Newman’s production of Anne Brontë’s The Tenant of Wildfell Hall (adapted by Deborah McAndrew) is dead theatre. It should never have been made; or, once seen in preview, it should have been cancelled immediately. Neither writer nor director should be allowed to work in theatre ever again**.

“In Bolton’s Octagon, the piece is played “in-the-round”. This is the one clue – other than a bit of colour-blind casting*** and electrical lighting and sound – that we’re watching a piece of theatre made some time after the death of Queen Victoria. In all other respects, this is the sort of repertory costume melodrama – played with full period costume and acting – more closely associated with the 1940s.

“The plot of the novel is faithfully served up, with nothing to upset anyone who wishes to spend their evening forgetting the 20th century ever happened****. The cast act as if trapped in an abstract idea of how heritage theatre should behave. Even in The Olden Days, this wouldn’t have been a particularly good production; now, it is purgatorial.”

That’s what you can’t say about this production. So: The Tenant of Wildfell Hall is nice. It’s fine. If you really force yourself you could probably even find it quite absorbing.

Verdict: Brexity period-Brontë adaptation pretty much succeeds on its own terms, if you let it.

[As you can see, the REAL Stage reviewer was much more fair.]


* No. Of course I wouldn’t have filed this to The Stage, which is interesting to me, re: the expected levels of self-censorship/“responsibility” “expected” of critics/criticism.

** No, of course I don’t *really* mean this. I’m sure they can do better. But why do we tolerate people making work like this? Why isn’t there a sanction for this sort of ill-faith?

*** That said, I really do hope the “colour-blind”ness of the casting was absolutely blind, because otherwise, it would look *questionable* that the only person who didn’t get to double-up a role (apart from the white heroine and white hero) was Marc Small, who only played the misogynist abusive husband – the irredeemable villain of the piece, while Nicôle Lecky played only an insipid sister and then the nasty bit of work that the abusive husband has an affair with. There’s no earthly reason that they shouldn’t have been playing Helen Graham and Gilbert Markham, but they weren’t, were they? Why not? “Colour-blindness”?

**** Of whom there clearly aren’t that many if the small audience in Bolton was anything to go by. I mean, the one thing that stops “us” (critics) really laying into work like this is this idea that other people probably quite like it, and we don’t want to be snotty about other people’s tastes. Except, here, it felt like the whole thing had been made for an imaginary audience who would appreciate it, but in reality, even the people to whom seeing a new, quite trad. adaptation of The Tenant of Wildfell Hall appealed looked tired and bored. :-/

[counter to all this, the Observer’s Clare Brennan (whose tastes are not mine) has now four-starred it. Tynan spins in his grave.]