My Country Matters (or whatever) – HOME, Manchester 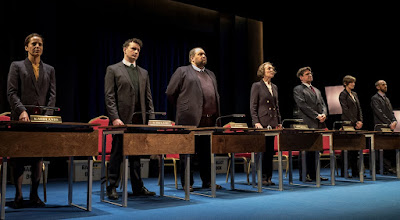 There’s about half an hour of Do You Think I Meant Country Matters? – National Theatre artistic director Rufus Norris’s “rapid” “response”, “verbatim”+ Poet Laureate off-cuts Brexit piece – which in other circumstances would be fine. (The whole is only 1hr15.)

Six actors – one each from Scotland (white, male), Northern Ireland (white, male), Wales (white, male), the North East (white, female), the East Midlands (South Asian, female), and the South West (white, male) – perform short snippets of things that people from their part of the country have said on some of the myriad subjects thought to be contained in Brexit. The actors are talented. Hearing things that some people think and say is interesting. Sometimes people even say funny things; intentionally (“Have a [Newcastle?] pizza: it’s a pizza base. With chips on it.”), and unintentionally (“‘Neither a borrower nor a lender be’ as it says in the Bible.” – says a racist, knowledgeably). Mostly they say things that we’ve all heard before, none of them is an expert (of whom – we’re reminded by the seventh actor, “Britannia,” who is repeating things we’ve already heard people from Westminster say – we’re sick), but hearing them all mashed up and close together at least allows us to hear what all the things we’ve already heard on the subject of Brexit are said right next to each other sounds like. A kind of short-form sound collage of thoughts agreeable and disagreeable. Something for everyone. Food for thought-lite. It doesn’t really pretend to comprehensiveness or opinion-poll accuracy (ha!), but it might just about trick you into thinking that you’ve got the measure of the mood of the country in these exciting post-Brexit times of ours. But it’s fine. In and of itself, it’s not bad. It’s at least watchable. It passes the time.

Now – you might think – this sounds like Any Answers, but edited, and with all the real people replaced by actors. Or like the audience bits in Question Time, but ditto. And of course, you would be absolutely right. But those things happen without Rufus Norris having been seen to Do Something.

What that “something” could have been appears to have been given thought for precisely the amount of time it takes to say: “Let’s do a verbatim show about it, but let’s also have some excruciatingly shit poetry in it too. And some ‘theatrical’ bits. Are Frantic Assembly free to do the movement again? No? Oh well, we can just cobble something together there.”

So, what We’re All Country Matters Now is really all about is Rufus Norris Doing Something. And – for this reason alone – it is without a shadow of a doubt, the most insultingly insufficient thing I have ever seen in a theatre.

Since talking about the show, at least two very senior figures in British Theatre have said to me – in answer to my sceptical face – “at least he’s doing *something*.”

But, HE’S THE ARTISTIC DIRECTOR OF THE NATIONAL THEATRE OF GREAT BRITAIN, FOR FUCK’S SAKE. The whole point is that he has resources the rest of us can only dream of. He could stage ANY PLAY, ANY WAY HE WANTED TO. And this was his response to Brexit. So, yeah, on those grounds, I reckon actually doing nothing would have been a lot better than doing this. So much noise about closing the empty stable’s door so meekly.

I’ve got a vague sense that when it opened in London he [Le Rufus] did the odd earnest interview where he said some head-scratching, soul-searching things about “wanting to stage voices from outside the liberal bubble” (leaving aside that the Royal Court already did precisely that before Brexit even happened, and with infinitely greater style). I don’t know about anyone else, but I’d heard pretty much every single sentiment expressed on Norris’s stage a zillion times before, so whoever’s in charge of the filter on that bubble he’s talking about really needs to get the thing locked down.

Rufus, WE ALL KNOW THERE ARE PEOPLE IN THIS COUNTRY WHO DON’T AGREE WITH US, AND WE EVEN KNOW HOW THEY DISAGREE AND WHAT THEY DISAGREE ABOUT (and yet, annoyingly, because this piece is largely unattributable sound-bites, we don’t even get an insight here into the interesting ways in which people with whom we think we disagree turn out to have loads in common with us, and people who we think are “on our side” turn out to be total country matters). But, yeah, I think pretty much everyone in the UK already knows everything in this show. And could stage it better, too.

Don’t even get me started on the design.

Or the awful, awful poetry (of which, to be fair, there’s mercifully little).

Or the bits with the pretend remote-control of the house lights.

The absolute worst thing about this show about Brexit, though, is the tragic, tragic irony that even though perhaps the point of the EU Referendum was to ask Britain about its relationship to the EU – and, I think it’s fair to say that in some quarters this was taken to mean “our relationship with Europe” – this show barely touches on Europe or the EU at all.

This is Hard Brexit distilled into theatrical form. As a nation, we’ve just done something which, to the casual observer, looks a lot like an act of immense violence and stupidity, largely because of ignorance coupled to high principles that have no foundation in reality or fact. And yet, really, this “play” is nothing more than Rufus Norris/the National Theatre staging a nation staring up it’s own bumhole. “Ooh, I’d never seen this bit before!” says You’re Being a Total Country Matter. Rather than take any kind of a political stand at all, Rufus Norris, the artistic director of the National Theatre of Great Britain, has made a piece that concludes, “some people think some stuff”.

What a complete and utter country.