Twelfth Night, or What You Will – Royal Exchange, Manchester 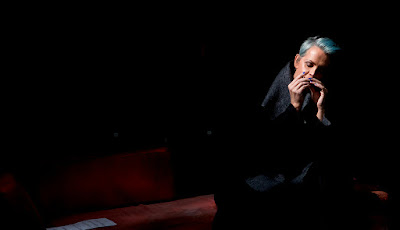 Jo Davies’s new production of Twelfth Night opens interestingly: the body of Viola (Faith Omole) is brought on stage, borne aloft by four anonymous figures, dressed in the all-too-familiar ragged clothes and bright orange life-jacket that have come to symbolise The Refugee Crisis. The rag-tag band of on-stage musicians (an accordion, a euphonium, a fiddle (or is it a viola? ho ho)) play a haunting, ersatz, all-purpose-Balkan lament.

And then that idea seems to vanish forever. Pfft! Just like that.

Viola is dumped on the small patch of pebbly beach-sand that has poured from the ceiling, and begins to speak, much in the manner of someone who has been given a lot of words to say, and insufficient direction as to how. She is answered in kind. A fairly simple exchange about where she is (“This is Illyria, lady[!]”) and what she should do (“I’ll serve th[e] duke. Thou shall present me as an eunuch to him[!]”) stretches on into eternity.

Next we spring up in the court of notably approachable Count Orsino (Kevin Harvey), a genial scouser who doesn’t seemed terribly troubled by his insane commitment to wooing bereaved Lady Olivia (Kate Kennedy). Similarly, three years later when Orsino has been introduced to his random new eunuch, ‘Cesario’ – an event that he takes in his affable stride – and sends ‘him’ off to bother Olivia with his latest suit, her own melancholy doesn’t appear to extend much beyond her wearing a black dress and saying some words about being bereaved that she has learned. Kennedy is very tall, so the line “Some mollification for your giant, sweet lady” lands an enormous laugh.

No one really seems to know who they are, where they are, what they are saying or why. Much of the production very much lets the 400-year-old text ‘speak for itself’. Or else, many of the performers here are delivering very much the York Notes version of the script; whereupon, having been told what all the words mean themselves, are all at pains to make those meanings as clear to everyone else by being as demonstrative with them as possible. The idea of internalising the lines as things that real people might say in some sort of credible world has been put on the back burner. That this production opens mere days after Rob Icke’s Hamlet closes seems inconceivable. Indeed, it is odd that they can exist in the same country or century. This is Shakespeare of the old school. Indeed, it is reminiscent of many a school production.

The drunks and fools of the sub-plot seem to fare better. What Simon Armstrong’s Sir Toby Belch lacks in nobility – he dresses, drinks and curses more like a grizzled tramp than a “Sir” – he more than makes up for with credibility. And, while Harry Attwell’s Aguecheek is a cardboard cut-out hipster caricature aging posho hipster (Nathan Barley meets Boris Johnson under a lank ginger wig), he’s certainly got the measure of his lines.

Anthony Calf’s Malvolio is also good. It’s hard to shake off the memory of him playing David Hare, but playing Malvolio absolutely straight makes a welcome relief (as does his command of the text). Indeed, reading the more discerning reviews of the NT’s recent version, it seems they really came a cropper not by re-gendering Malvolio, but by then indulging in the gleeful persecution and mockery of a newly sympathetic lovelorn lesbian [and Antonio’s love for Sebastian]. Here no such solecism is committed. Calf is a quiet, pained, white, middle-class man, who is sick of clowns and drunkards taking the piss and accusing him of being puritanical. As such, he can expect no sympathy whatsoever from anyone. What an absolute bastard.

As far as Antonio’s love for Sebastian goes, well, the words are all still there, but it’s literally impossible to imagine a story of male-male unrequited love played more blankly or more straight. Against this, we do have Feste played by trans* cabaret-activist Kate O'Donnell, who’s not bad at all. Maybe a bit cowed by having to use someone else’s [mostly terrible and impenetrable, old] jokes – there’s a bit after the interval where she gets to do her own stuff, and the difference is phenomenal – but there have been far, far more tedious fools.

Leslie Travers’s set consists of a lovely riff on Cornelia Parker’s Cold Dark Matter (you know, the exploding shed). It doesn’t really *do* anything – except, at one point, the middle bit comes down and imprisons poor old Malvolio Hare – but that’s fine, right? There’s also a swishy blue-green floor, which reminds us all that the play begins with a shipwreck, but doesn’t really explain why everyone walks about on some bluey-green floor for the next three hours and ten minutes (minus interval). But very few elements of what happens on the stage appear to connect meaningfully with any of the other things. The naughty midnight party scene, for example, is quite fun. Toby Belch comes in – as pissed as a childless baby-boomer – and straps on his old electric guitar, looking for all the world like a missing member of Pink Floyd (now). But these resonances attach to nothing, and so disappear into the exploding shed, or trickle away through the little pile of pebbly sand, which still sits in the middle of the swishy blue-green floor, in Sir Toby Belch’s room.

We know that Twelfth Night is currently considered A Problem[atic] Play. As soon as subjected to any degree of logic or psychology most of the characters are revealed to be very seriously mentally ill indeed and many of them are clearly alcoholic. To laugh at them would be monstrous. The “happy resolution” of marriages – each entered into with barely a minute’s thought – seem destined to only exacerbate this unhappiness and reproduce patterns of abuse. Davies’s production neatly sidesteps these concerns, by returning the play to the realm of absolute nonsense. *Of course* it makes no sense that Viola’s twin brother Sebastian agrees to marry Olivia within minutes of meeting her. Of course it makes no sense that – upon seeing the woman he loves married to the twin of his eunuch; who turns out to be a girl – Orsino proposes to Viola, particularly here, where there has been not one second of any sort of erotic tension whatsoever. Perhaps the one coup Davies does achieve is for this not to feel like a sickening early-modern gloss over gross gender politics, but just more nonsense. No character has felt real. Nothing has ever been at stake. People have just said words, and now they’re saying more words. What you will, indeed.