The Kid Stays in The Picture – Royal Court, London 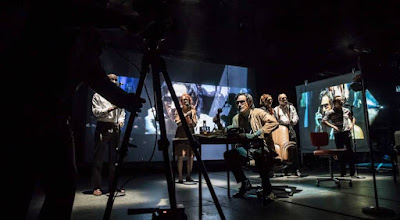 The Kid Stays in The Picture is essentially (nay, actually) an adaptation of Bob Thing’s Hollywood memoir of the same name. From modest beginnings as the child of a Jewish dentist father (and a largely invisible mother) in New York, through a faltering, and short-lived career as a “Latin lover” movie star, to his sudden and fortuitous storming the gates of Hollywood (or rather, being catapulted right over them into the chair of Paramount Studios in the late 1960s), Simon McBurney’s live action re-creation appears to hop faithfully from anecdote to anecdote with the ragged but casual energy of someone with only 2hr30 left on earth to recount their life story (inc interval).

It is a hugely engaging piece of theatre. Rich in incident, and (particularly in the first half) somehow incredibly rewarding, in terms of hearing the stories behind how some of the era’s most famous/successful films (Rosemary’s Baby, The Godfather, Love Story, Chinatown) came into being. (And more chillingly, how much like some grotesque Greek Tragedy it feels when Sharon Tate is first introduced, and we all know precisely where that thread of the story is going to end up.)

The manner of its telling is also engaging. Essentially building on the techniques pioneered by things like Katie Mitchell’s Waves, over a decade ago, or Beware of Pity last year – and feeling strangely cramped on the tiny stage of the Royal Court – the piece features a bunch of microphone stands, a few inter-cut live-feed videos, film clips, and a large glass case on a trolley.

Kid...’s use of video is interesting. It’s interesting because it’s clearly not often very interested in virtuosity, and yet it remains hugely watchable. Sometimes it even carries the odd joke (some bloke’s hand clearly holding the model of the plane he’s “flying in” as the footage of the plane is projected onto the main screen). It’s interesting, because despite often what’s being projected is dead/stock/non-live footage, the cutting makes it feel full of kinetic energy.

Similarly, the performances here aren’t exactly about “virtuousity”. The whole feels much, much too fast to have a single scene in which two characters meet and do something as old-fashioned as act at each other. This can be read as a smart decision relating to the way that the narrative itself moves. And it works. Although, occasionally, you do find yourself wanting to see a whole scene. Maybe just all the dialogue that took place in one particular incident played out in full, rather than being commandeered in narration by our guide through all this, Robert Evans himself.

Except, maybe this is the hard-to-grasp-in-the-moment point. That what we’re watching is a stage version of the experience of a memoir, not an actual biopic. It’s a sophisticated thing to do, but I suspect we subconsciously learn very different things to what we’d maybe be thinking if the presentation here wasn’t so postmodern (which is to say; contemporary).

Indeed, it is maintaining this presence of the authorial voice that also saves the show from becoming a simple exercise in hagiography, and with it a disquieting echo of perhaps another, later, force-of-will New Yorker’s narrative, full of topical incident and sudden reverses of fortune.

That is to say, it is a good job that McBurney’s The Kid Stays in The Picture feels capable of distance and criticism, or it would feel like a first draft of Trump: My Struggle, or similar.

So, yes. It’s good. Really good. Fun and watchable and everything. But, oddly, I think I missed the wider point, if it was trying to make one. Possibly it wasn’t, which would be totally fine, obviously. But it makes you realise how much the general English Theatre Experience leaves you with a neatly packaged take-home message. If there was a message here, it appeared simply to be “this shit really happened!” Which is almost fine and exciting as a message. And I daresay its Ayn Randian Will-To-Power/Triumph-of-the-Will will inspire a bunch of people who saw it to be more proactive. (And possibly less troubled by their consciences...)

[It’s interesting, isn’t it? You spend your whole career so far complaining that everyone makes theatre with too-clear messages, and then when you come across something without one you go to pieces. Either that, or this really is The Great Right-Wing Play everyone was looking for in 2007/8.]
Posted by Andrew Haydon at 17:07