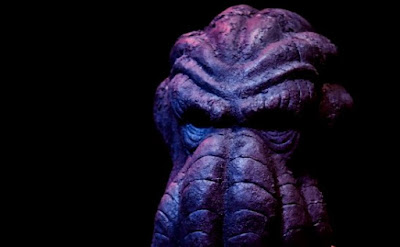 Pomona is a difficult play to write *about*. It’s a bloody gift to write *around*, but a nightmare to describe. This is because, in essence, it describes a nightmare. The scenes occur as if shuffled from their “proper” order. You get a sense that there is a linear narrative in there somewhere, but you’re just not being fast enough. And then things happen. Characters you’d presumed were figments of another character’s imagination suddenly meet other characters whom you’d assumed were real. The lights all go off. We see brief tableaux in strobe flashes. Charlie (Sam Swann) is talking Keaton (Sarah Middleton) through a role-playing game (RPG) about Cthulu, except the next minute it’s Zeppo (Guy Rhys) talking to Ollie (Nadia Clifford).

The basic plot – yeah, I’ll give it a stab – is that Ollie is looking for her twin sister in Manchester. In flashbacks (?) we see her sister start work at a brothel, chatting to Fay (Rebecca Humphries). When she (the sister, also played by Clifford) disappears, Fay starts asking awkward question of the brothel’s owner(?), Gale (Rochenda Sandall). Gale is then in trouble with her boss, Keaton.

Or: Charlie and Moe (Sean Rigby) work on Pomona guarding the only road entrance; their boss, Gale, orders them to murder a woman. In their private lives Charlie is meeting Keaton who’s responded to his advert to play an RPG with him; Joe goes to visit a woman working as a prostitute, Fay, because – thanks to his anger management – he’s been finding it difficult to just have human contact. The woman they’ve been ordered to murder is Fay. Gale’s boss is Keaton. Ollie is almost invisible.

The plot feels slippery, illusory. It could all be in the minds of any one of the myriad characters, Ollie might not have a sister, or she could *be* the sister. “Ollie” could be made up. Keaton’s role as a master criminal could be role-play fantasy or deadly reality. And Zeppo – the most fleeting figure of the piece – he might really own most of the city and “not get involved,” or he could really be a seagull talking to a dead girl all along.

What’s utterly brilliant is that while the structure glides and shimmers in front of us, it neither stops us caring about the characters, nor about the story. Think: those David Lynch films where some twist halfway through essentially makes the story impossible in a linear sense. But, Christ almighty, what a journey it is. It feels – something reflected in Georgia Lowe’s design, echoed and enhanced by Elliot Griggs’s lighting design – like you’re being sucked into a vortex. The structure of the play, the feelings of the characters, even the shape of the Exchange, contrive to make it feel like everything is spiralling into this central plughole in the middle of the city, in the middle of the stage.

A big black hole in the middle of the city.

Along the way, the play also manages to feel like one of the best metaphors for life in late-capitalism ever written. (Having done the programme interview, I happen to know this isn’t entirely coincidence. But, well, hats off to McDowall, it totally fucking works.) The characters have a way of saying things that are not only true in the moment or to their reality, but also refract a far wider sense of what something is like. So much of each of their situations reflects some vile facet of life in our economy. The opening is at once once a brilliant comic aria on Indiana Jones and McDonald’s Chicken McNuggets, a key describing the themes of the play, and a kind of horrible warning about how we live now akin to Ten Billion. The whole is both a brilliant joke that it’s possible to take entirely seriously, and an incredibly sobering analysis that you’d have to try very hard not to find gripping and exciting. Moreover, Pomona is (hold the quotes slot) PROBABLY THE BEST PLAY ABOUT MANCHESTER EVER WRITTEN. Beyond this, the performances are blistering good; proper barnstorming rhetoric in authentic Manc accents offset with subtle, emotional moments, beautiful “reaction shots” (watching in-the-round, you get to really focus on someone just listening sometimes, and the cast pull it off perfectly). And Christ, the look of the thing, and the sound of the thing (Giles Thomas – absolutely outstanding work as composer and sound designer)...


[Forgive the personal intro: When I first saw Pomona last year at the Orange Tree I had never heard of the titular place. Now, just under a year later, I live so close to it that I receive letters from Manchester City Council when people put in planning applications on it. (And, fuck those planning applications, frankly. What kind of demented cunt thinks those buildings would be good anywhere?) Pomona is now almost literally my back garden. I won’t say that the show actually played a part in my moving from London to Manchester. And, really, the location of my flat is basically just a coincidence. But it certainly didn’t hurt my decision-making process when I found out where it was in relation to Pomona, and it’s a coincidence of which I’m incredibly fond.]

I really wish I’d reviewed the production when I’d first seen it at the Orange Tree a year ago.

I’ve still got the start of that review on my laptop:

Once in a while a play comes along that is so good that the first three lines etch a grin onto your face that you just don’t lose for the next 1hr45 (no interval). Ali McDowall’s Pomona is one of those plays. It’s one of those plays that’s almost embarrassing to write about, it’s so good. I mean, Jesus Christ, who expected *THE ORANGE TREE OF ALL PLACES* to put on what is possibly the best new play this year?...

Clearly after scribbling that down I must have [and this joke only makes sense if you’ve seen the play] jizzed over everything in the city and then gone to sleep for millions of years.

What’s annoying [apart from how many brackets there are in this review] for me, as “a critic”, is that it would have been nice to have had more record of what I first thought to compare to what I thought last night. Because, as my TMI intro makes clear, I now have an entirely different relationship to almost everything in this play.

You know how when you watch a play, only half of what you “see” – especially in something like Ned Bennett’s production here – is actually on stage. The other half (maybe more) are the things you picture in your mind’s eye as characters describe them.

What’s absolutely fascinating for me is that when I first saw Pomona I had no mental picture of Pomona. Or of Manchester in general, really, save for the walk from Piccadilly station to the Royal Exchange. That situation is now entirely altered. So, last night, when someone described Pomona, or the city, or the M60 my original mental pictures were completely updated. I could imagine the cine-realist version in my head, rather than making something up according to the available information. I wonder what that sort of disruption does to your relationship with a work of art.

Still, this is all so much navel gazing (“Pomona, light of my life, fire of my loins. My sin, my soul. Po-mo-na...”), and some of you might actually want to read about the play...

This may have been referenced elsewhere but is it by chance that the names of most of (all?) the characters are linked to early Hollywood? If you're going to name characters Zeppo and Keaton then, if nothing else, you're going to send people down that particular path.

Gale? Now there's where it falls down, reminds me of Dorothy Gale but she's fictional. Hmmmmm.

Oh, man. I bet that is absolutely spot on. I thought *something* must be going on with the names (like all the characters in Shopping and Fucking being named after members of Take That (and Lulu) and the villain being called Brian (after Harvey, from East 17)...), but I didn't make the connection. I don't remember seeing it anywhere else; I think you get the prize. :-)