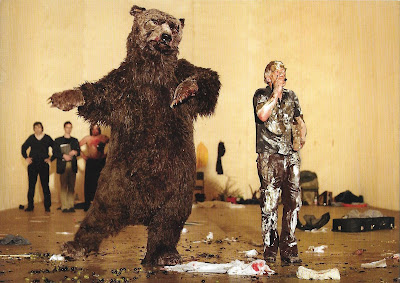 Earlier today [now a few days ago] a colleague sent me a message saying “I liked the new David Hare, I must be off the team now, right?” Of course, he was joking. There aren’t really teams in criticism, even if Matt Trueman did once propose the appealing idea that there should be (almost exactly a year before suggesting theatre fans should be more like sports fans, weirdly). That said, *obviously* my colleague’s joke refers to a more widespread perception (in theatre terms; so, like, thirty people) or it wouldn’t work.

This perception of critical “teams” – at least in its current incarnation – goes back to that Nicholas Hytner comment in 2007 when he called the then “top rank” of British theatre critics “Dead White Males”. Back then, everyone was also publishing “Bloggers versus Critics” articles every other sodding minute. If you left aside nearly all the facts you could come up with quite a plausible sense of two “sides” in conflict. Although even this claim dates me as a critic. Far more people would perhaps date the current division of “teams” from Three Kingdoms in 2012. And, again, if you ignore enough facts, that’ll also do nicely. Doubtless older critics can name even more ancient largely illusory schisms between one sort of critic and another – young against old, men against women, whoever against whatever – over some even older then-new thing in theatre... It’s also interesting to note in passing that this false Team/Off-the-team binary seems to be echoed by that other hoary old binary of served-texts and every-other-fucking-thing on a stage, with liking a served-text being a sure-fire route to off-the-team-dom(s).

Insofar as anything in criticism is “really important”, I think it’s really important that we keep on rubbishing these sort of lazy lumpings-in. I still remember (nine years on, Christ!) my intense irritation at this early blogpost by Michael Billington (boo! Hiss!) in which, while trying to ascertain whether “audiences” have “forgotten how to think”, he argued: “ audiences today adopt one of two postures: collective reverence or atomised selfishness. Alan Bennett is the person who has best pinned down the former. In Untold Stories he recalls going to a matinee of Complicite’s Street of Crocodiles and finding himself surrounded by worshipping acolytes.” Billington went on:


My experience coincides exactly with Bennett’s. As our theatre has become more sectionalised, so audiences have increasingly turned into clannish fans... [A]udience partisanship is equally prominent amongst supposedly progressive groups like Kneehigh, Improbable or Frantic Assembly. Watching Kneehigh’s current production of Cymbeline – which retains Shakespeare’s barmy narrative while junking his sublime poetry – I couldn’t believe that intelligent adults were happily sitting through this faux-naif nonsense. But I was, of course, missing the point: I was surrounded by rapt fans for whom Kneehigh are the Man U of avant-garde theatre.

Now, if you’ve read Simon Stephens’s Twitter feed – like, ever – you’ll have noticed that supporting Manchester United is very far from a process of “uncritical acceptance”. But that point is probably true of theatre (and everything else) too. The “fan” is not uncritically accepting, full stop. [I should say right now that “Fandom” isn’t really my area and I don’t really like the word, or self-identify as a “fan”. Irrespective of that, though, even the quickest look at Meg Vaughan’s writings on fandom (which I now can’t find) confirm that “the fan” is hardly an identity that precludes critique.]

Instead, all we have  – all any of us have – is our taste. And it’s an inexplicable thing. I’ve never found a book that explains where it comes from, why it exists, or what having it achieves. I suppose there are hints in Chris Thorpe’s Confirmation (scroll down for current tour dates) about how societies/communities construct themselves around shared values, and maybe even “tastes”. After all, where would youth subcultures be without shared tastes in trousers and tunes? (Bloody nowhere, that’s where.) So, while it’s galling to read Billington paint the people who happen to like something he doesn’t are unthinking sheep-like masses, it is at least understandable. After all, people who don’t share my exact tastes are utter morons, and it’s the work of criticism to tell them so repeatedly. (Lol/jk)

All of which is a meandering way of saying that, on one hand, lumping people together and assuming you know what they’re going to think of something – either because someone in a superficially similar demographic thought it, or because they’ve liked something different by the same people in the past – is pretty stupid. And yet, on the other hand, what we’ve liked before and suggested affinities are pretty much what we base our decision making processes on.

In short: I’ve disagreed with each and every one of my contemporaries about one show or another in the past month alone. (And, in each case, I’ve been right while they’ve gone suddenly, inexplicably mad...)

Or, to quote the Late Review pastiche in Crimp’s Attempts On Her Life, “Theatre has nothing to do with this and I bitterly resent the implication that I'm some kind of Nazi.”


[cover photo: Dimiter Gotscheff and friend in A Midsummer Night’s Dream]
Posted by Andrew Haydon at 19:05