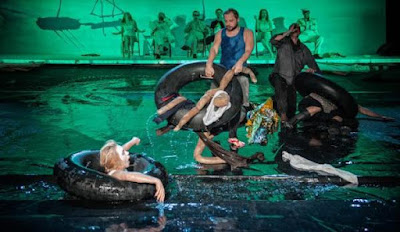 11/11 is Independence Day in Poland. The independence they’re marking is from Poland being divided up and ruled by Russians, Prussians and Austro-Hungarians, essentially ended by the Russian revolution of 1917, the German surrender in 1918, and the associated collapse of the Habsburg Empire because reasons. Poland enjoyed almost 21 whole years of independence before next being invaded, and occupied for the subsequent 50 years (and two months). On 11/11, right-wing/far-right/nationalist football fans have a bit of a march to Warsaw’s National Stadium (built for 2010’s European Cup). This happens to be right next to Teatr Powszechny. In previous years, this march has tended to end with paving stones being ripped up and flung about. However, two weeks previously the right-wing, nationaist Law and Justice Party won a parliamentary majority in the general election here. It’s the first time they’ve won an election, and the first time any party has achieved an overall majority in the free elections established after the fall of Communism. The result is a complete catastrophe for Poland, but apparently good news for the paving stones of Warsaw’s Praga district.

Roar, China! is a 1926 (or 1930 according to Wikipedia) play by the Soviet Russian playwright, Sergei Tretyakov, and in its original form and intent is full-on agitation and propaganda. Given Poland’s history with Russia, a contemporary revival is *obviously* not as simple as an attempted resurrection of “authorial intent”. I don’t imagine anyone would even begin to approach it as such. At the same time – almost half a century of Soviet occupation between when the play was written and now notwithstanding – this Polish production is clearly making use of Tretyakov’s anti-Western-imperialist message, largely by just putting it onstage and letting it resonate how it will.

I watched the piece with a synopsis, rather than full text, so I was at one remove from any immediate resonances there were to be had, but, on the plus-side I didn’t have to keep looking away at surtitles, and the staging was such that I was more thasn completely engaged throughout. Even without understanding a single word that was said (my Polish isn’t all that) it was completely possible to follow the action, to be moved by it, and excited by the staging.

This is the first paragraph of the synopsis:

“The story takes place at the beginning of the 20th century, in the Chinese province, in the Wansien city by the Yangtze River. During this period Western countries economically exploited the region, treating Chinese people as slaves. The events unfold in two places: on a ship, where white colonists are gathered – the Captain, the Lieutenant, de Bruchelle family, and on a river bank, where we take the perspective of poor Chinese people (Boatmen, representatives of the administration, the Student, the trader). The Page serving on a boat and on the land is a link between those two worlds.”

There’s an excellent summary of the play’s narrative and theme here: 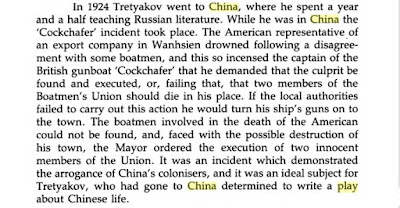 [I should note, for the benefit of British readers, that everyone in the production is white. Given that Poland’s population is 98.6% white, this seems understandable. (Poland’s Vietnamese population runs to a whole 0.1% (either 29,000 or 50,000 according to different places in the same Wikipedia article) of her population.) It is interesting to see a play essentially about racial tensions performed by a cast that is entirely racially homogeneous – at least visually. (Indeed, it seems statistically unlikely that there would be even one non-white actor anywhere in Poland (employment in the live performance sector is 71,000, 0.5% of Poland’s total employment).) It goes without saying that *of course* I would find it deplorable if Poland’s overwhelming whiteness were ever cited as an excuse not to train or employ non-white actors.]

For what it’s worth, there is actually very little discernible comment in the narrative on “racial difference”. This is, after all, a strict Marxist-Leninist piece which analyses the situation seeing the British and Americans’ white supremacist arrogance as a symptom of their Imperialist bourgeois capitalism. I do wonder if this analysis is entirely correct. It’s interesting that white workers are largely absent from the story, and as a result, their false class consciousness – scenes of white soldiers and sailors allying themselves along racial lines with those exploiting them rather than with their fellow (Chinese) workers along class lines – is absent.

The stagecraft itself here is wonderful, particularly after having been in England for a while*. As it happens, I’d seen something Paweł Łysak directed before. [His production of Danton’s Case from Teatr Polski Bydgoszcz was at Warsaw Theatre Meetings in 2009 (“one of the best I've seen in any language this year”), so I was incredibly pleased to discover he was now the director here.]

His style (if it’s fair to extrapolate from two productions) is maybe closest to Sean Holmes’s work with Secret Theatre, or perhaps Joe Hill-Gibbins in The Changeling. But more *relaxed* than either, somehow (I mean that as a positive). I mean, it’s not *relaxing* to watch (have a look at the trailer), but the actors just seem to move more freely on stage. I think this is related to what Holger Syme was talking about. There’s also that greater sense of abandon in the staging. Comparing it to Joe H-G’s recent Measure For Measure, which I loved for its successful embrace of so many “European” visual tropes, it makes the M4M still seem remarkably hidebound, strict, and mannered. Which surprised me. But, yes. The stage itself is simply designed. I think we the audience are seated on what’s normally the stage of Teatr Powszechny’s main house, while the auditorium has been built over so that the playing space was kind of “in-the-round” (well, actually an extreme thrust, with loosely configured seating). In the centre of the stage was a shallow trench and then a deep section of it filled with water – enough to submerge a couple of actors standing up next to each other. There is also a lot of hose action. I know it’s cheap to be excited by something so simple, but there was something brilliant about both how casually it was just *there* and then how violently it was used. Like, you knew it would get used, but even so, when it came, it didn’t felt like the usual UK concern for not getting the audience annoyed/wet. There was also a HUGE bag of squeaky plastic chickens.

It’s difficult to review a local production in its local context when you are not also local. However, it seemed incredibly clear to me that this was a horribly urgent-but-accurate bit of programming. No one could have known the election result when the theatre was programming the play, even if Poland’s rightwards drift began some time ago.

On the day of the Independence Day March, the literary manager of the theatre took me to a new exhibition at the Zacheta museum on the rebuilding of Warsaw of post-war socialist art, architecture and propaganda. On our way back to the theatre we passed the crowds peeling away from this year’s completed march. One large group of young men with Polish-flag armbands, Polish flags and flags of 1930s Polish fascists posed around a large banner proclaiming their resistance to ISIS. The banner was of course written in English, for the benefit of the world media.

The arguments of the play seem relatively simple and clear-cut in their own context. Their multiple meanings and resonances in a modern Europe are far more complex. That its concerns with imperialism and racism seem entirely modern is on one level deeply depressing, but the fact of its beings staged, and its success and popularity are at least a small reason for hope. And God knows we seem to need a lot of both reason and hope in Europe and beyond at the moment.


And not this sort of hope:

*It’s been striking me a lot recently that it’s odd that Britain ended up fixing on Germany as a point of theatrical reference-for-change. I suppose [broad brushstroke analysis] that it’s *so* different, with so few fixed points for comparison, that it is easier to feel swayed by, and so to take as an example with which to try to change our own culture. But, for my money, I think there’s actually more comparison between British and Polish theatre. Perhaps as a direct result of our recent interest in Germany. Polish theatre, it seems to me, exists in a similar place to where Britain’s now is, with on one hand a good grasp of conceptual ideas, but on the other hand a recent strong tradition of naturalism and emotional empathy, so that a synthesis of the two doesn’t feel like a complete betrayal of a philosophy in the same way as it does in Germany. At the same time, I know it’s as foolish to talk about “Polish Theatre” as it is to imagine there’s one “German Theatre” or one “English Theatre”, and that there are easily as many internecine squabbles between schools of thought.
Posted by Andrew Haydon at 15:52