[written for the programme of Pomona at the Royal Exchange Theatre, Manchester] 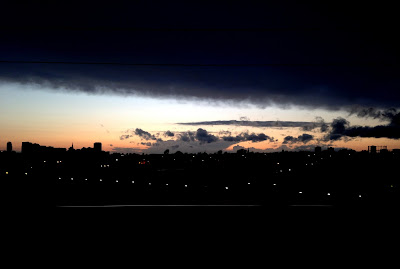 So, what the hell is it all about?

I’d been obsessed with Pomona for ages. You go from Manchester City Centre to Salford Quays – which are now these two steel and glass places – and in the middle there’s just this inexplicable wasteland. I was particularly interested in it at night. Because there are no street lights there, when you go past it, it just looks like this blank – like someone forgot to fill the rest of the map in. There’s just this hole.

A few years previously I’d driven back from Newcastle very late. I was on the M60 when there was no one on it. It was three in the morning and I missed my exit, so I had to keep going round. And there was this odd sensation that you could just stop the car and stand in the middle of a road... Just to keep myself awake I started having conversations with this imaginary guy who operated out of his car. I just thought there was something fun and interesting about that.

So, I had all these elements that I didn’t quite know what to do with and they gradually began to coalesce.

I wrote Pomona straight after I wrote a big three act history play – a murder mystery, which hasn’t been staged yet – and to help me get through that I thought “the next thing I’m going to write this really free-associative thing where I’m going to plan it very little and just allow all the elements to just spiral off each other and be more impulsive.”

As things started slotting into place, I realised there was this big plot going on and there were all these characters who just started emerging who were all circling this spot in the middle of the city – as the M60 was circling the city. My model for that was partly the film Chinatown. In Chinatown they also don’t go to Chinatown until the end, but it also forms this kind of greater metaphor for the whole.

How did the Cthulhu figure from HP Lovecraft get in?

While the play didn’t end up as free-associative as I’d intended it to be, I did try to leave space for things to happen in the writing of it to surprise me. This was a play where I was just going to allow the background noise to seep into the foreground. And the HP Lovecraft references turned up because they operated on a similar frequency to the rest of the material. And because I’d been reading a lot of Lovecraft.

I didn’t know the ending when I was writing it either. Which was weird. Normally I’ll have the beginning and the ending, and the middle will gradually bubble, but this time I had everything except the end. I had characters, and *they* knew what was going on. Or they seemed to. And as it went down underground it became clearer and clearer what was going on down there.

And that was a surprise to you?

By the time I’d gotten to that point a huge amount of the play had revealed itself to be about consumerism, and capitalism, and people buying things and selling things basically, and how we operate when *everything* is globalised. When every product we buy is available in every country in the world.

I remember the sensation watching the play was like this incredibly fast helter skelter or a spiral or something... And then there’s something mobius-strip-like about it...

It kinda loops back on itself by the end, yeah.

And there’s no way in linear space, or time, or whatever, that it’s possible. Is that right?

I have my own explanations for everything. But, those are like the least interesting explanations ever. Like, I wouldn’t want someone to actually explain Mulholland Drive to me.

I was just about to say Mulholland Drive. Is it the blueprint for this kind of story?

Absolutely, yeah. Anyone who’s doing anything like that with narrative... But what’s so weird about Lynch is that he’s so resolutely American. His films are just drenched in a particularly fifties Norman Rockwell kind of America...

But what’s interesting about Lynch’s films, and I guess about Pomona as well, is that there’s a real commitment to Story. It’s not like A Vague Thing Vaguely Happening In A Universe of Vague Things.

No it’s not. It’s different though, because Lynch seems to write more like dream-logic which I could never do. I mean, he’s a true artist, that guy. Pomona was written in the order you see it. I didn’t muck around with it. I knew exactly when things were coming. I knew exactly what was happening when. Even though in the initial writing of it, I didn’t know the precise nature of what was going to happen at the end.

Even thought the initial impulse was to write something really impulsive and free, it’s actually one of the most aggressively structured and plotted things I’ve ever made.

The nature of its structure makes you second guess yourself and break everything at every turn. Recently with my writing I’ve been thinking it’s far more interesting to just explain as little as possible; to deliberately leave as much space in there for the audience as possible.

Does that way of telling a story have a meaning in itself for you?

It’s symptomatic of the fact that life doesn’t generally feel naturalistic to me. Everything feels like black and white and technicolor at the same time. And everything feels like quiet and loud. And everything feels like it’s got like completely weird competing beats and rhythms to it. So if I want to write about human behaviour, or the way I see things, or or whatever I want to write about, I get to a certain point where I need to not be as rigidly in reality any more. My recent shift away from linear narrative is a reaction to that as well. It’s part and parcel of the same thing.

In Pomona the big shift – my way in to write that feeling – was “Ok, I’m going to write about a city.” It’s not about Manchester, it’s not about London, it’s just about A City. It’s what it feels like to be in a city. If I’m going to do that then the form has to be the form of a city and the way I thought about doing that was if you walk down a shopping street, like Market Street here, or Oxford Street in London, you’re like hearing about fifty conversations that are streaming past you, if you really open your ears. And you’re seeing all the everything at once and you’re walking past shops that are playing like, I don’t know about shops, but, like chart music, and that place plays jazz, and that place plays whatever, and everything is just really just busy and chaotic, but because of how we’re able to live we can find a kind of clarity through it. And that’s what I wanted the play to feel like.

That was the real thing about writing it. When people ask: “why can’t it be in the right order?” And “why can’t it be this?” It’s like: *because*. It would be dishonest, if I’m writing a play about a city, for the form not to be a city. The play had to be city. Every scene has a different kind of architecture. I really had to think carefully about that in order to faithfully recreate what it was like in my head, you know...