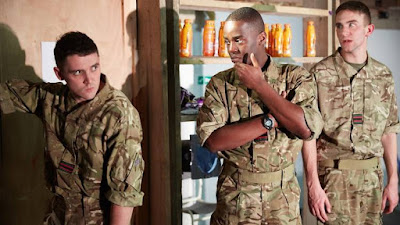 I love The Yard. Have you been to The Yard? The Yard Theatre, just by Hackney Wick station, is literally in one obscure corner of what looks like a builder’s yard. Sure, across that yard there’s also the White Building, which houses the Live Art Development Agency and a nice-looking pizza place. And beyond that there is a canal and then the Olympic Park. One day soon, it’ll all be fully gentrified and cleaned up and won’t be any fun any more. At the moment, though, around The Yard, the buildings are still grubby, crumbling, and covered in graffiti. There’s overgrown plantlife and barbed wire that looks like it still means business. The theatre itself is an auditorium built of out MDF (I’m guessing) at one end of a long low shed with a corrugated iron ceiling. There’s no wing space. There’s no fly tower or “backstage”. There’s just raked seats (plundered from everywhere and nailed down) facing a wall and, in between the seats and the wall, an expanse of concrete floor constituting the stage.

The programme of work shown at The Yard is massively varied and incredibly astutely programmed. Most of the year (it feels), is given over to double bills of scratch performances, works in progress; put on with – I imagine – minimal risk to performers’ financial wellbeing.

What you don’t tend to see there, on the whole, is things that self-describe as “plays”. Now, obviously we’ve written about how this isn’t a value judgement, we’ve recognised that there might be *text* in a not-a-“play”, and have rejected the critical tribalism presumed around such demarcations. And my impression might be wrong. But that’s my abiding impression of The Yard’s programming.

But there’s still some value in saying what sort of thing a thing is, right? (Or is that where people start freighting every term with loaded agendas?). What I found interesting – properly fascinating, in fact – about Lines (which I saw in preview, but loved, but still didn’t manage to write-up until now, so Christ knows how that works with The Rules; it might have got a bit better?) is that on the face of it it walks like “a play” and quacks like “a play”, (ok, like a specific sort of social realist contemporary play), but I don’t think it is one of those at all. Or, rather, you *could* equally view it as an installation with a lot of dialogue and acting. Or, in terms of the text, something more like a staging of a poem.

Pamela Carter’s writing is brilliant. Crisp, funny and contemporary as dialogue, it also seems (I’ve not read it, only seen the production, so am guessing) to contain an architecture that forces non-naturalism. Lines’s 90 minutes are divided into two wildly uneven parts with a short interval. The first part shows a series of snapshot-quick scenes in which four new army recruits in their barracks bond and bicker while learning the ropes, barked at occasionally by an unseen (voiceover) sergeant. Put reductively, one is black, one is gay, one is northern, and the last one, well, the last one is the weak link who might have a problem with all those things. He also seems to be a bit lazy, a bit disorganised, a bit distracted. In dramatic terms it’s of course interesting to see the normal expectations of plays-about-soldiers subverted and rather than being about racist or homophobic bullying, it’s about a lovely diverse group of soldiers turning violently on the bigot in their midst. Weirdly, you could bring Quentin Letts to see this, and he wouldn’t be entirely mad to be able to discern a parable about the “violent forces of political correctness” or something. I don’t think it’s a point the play is making, but it certainly gives lazy liberals like me who hate militarism something different to chew on. Whether it’s likely or real, researched or imagined, the insight that an army is primarily about killing an army as a tightly functioning unit is powerfully made. These soldiers are less worried by constructions of masculinity, race or sexuality, as the efficiency of the guy who’s got your back. It’s not about like or dislike, it’s about not getting killed. There’s a fair bit of shirt-offery, and some (pants-on, weirdly) showers, and, well, I imagine it’s fairly homoerotic. I happened to see it the same night as Chris Goode, whose Ponyboy Curtis at The Yard I sadly missed. But, having read the latter’s reviews, I was curious about what consonances/departures there were between this play about aggressive, weaponised “men”, and PBC’s attempt to rethink masculinity.

The performances here are excellent, I thought. Still English acting rather than what we might call “Live Art *being*” but very good acting, nonetheless; but, interestingly, along with the intensity of the performances, the thing that really raises the game of Jay Miller’s production is the sound design by Josh Grigg . [edit: when originally scanning the programming I credited the sound design to Manni Dee who was the composer on the piece. What I said next still stands, though: "Actually, it’s credited as “composition” and I’d agree".]  They should have CDs of the Lines soundtrack on sale at the exit. It’s this urgent, thumping, slightly-too-fast throb that hardly ever fully goes away. And it transforms the piece from *just a play* to a full-on collaborative work of art. The sound is a fully-realised-in-its-own-right element that when placed alongside the performances of the text and the lighting and the design – stark pale blocks of lockers and beds on a low bare platform.

Then there’s the second part. Now, personally, I’d wouldn’t have had an interval but a lighting/loud-music intervention as a kind of “palette cleanser”, but the interval serves the same purpose roughly, and feels in keeping with the Yard’s rough and ready aesthetic. It works, so why worry? The second part is different to the first. The first part ends in incredible tension. I don’t think it’s referred to once in the second. Instead, three of the soldiers just describe deaths. Deaths from films? Their own deaths in combat? Some combination of the two? This could, esp. given the interval, have gone on for about an hour and I’ve still have loved it. Instead it’s pretty short. But, blimey. Clever. And evocative. Really evocative. It somehow moves your mind expertly from considering these soldiers as people to being, well, multiple symbolic tragedies. Soldiers keep on getting killed. It’s almost like something from Kipling. The clear-eyed imperialist wryly observing, “A scrimmage in a Border Station / A canter down some dark defile / Two thousand pounds of education / Drops to a ten-rupee jezail”.

Hopefully, as a postmodern audience, we’re a bit less bothered about the nationality of those being killed so much as the fact of there being killing at all, and I think, in a funny way, even though these soldiers are apparently British, the piece achieves that. You’d have to be a pretty stern bigot not to see parallels between those trained by the British Army and those trained by IS/al Qaeda/Taliban/Republican Guard. It’s very good on not asking its questions too directly. And it’s always difficult to pin-point how much of what one thinks about during a show is directional sleight-of-hand and how much personal preoccupation (not to mention confirmation bias and seeing what you want/expect to see), but for my money this is powerful, intelligent, evocative work that contains just the right mixture of force and space. A powerful achievement all round.