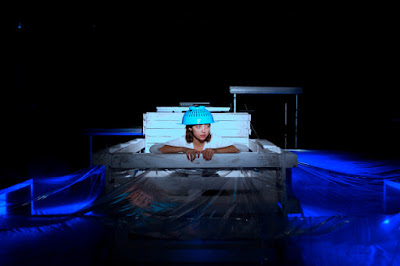 Have you ever wondered what Life of Pi crossed with Blasted would be like? No. Of course you haven’t. Why would you? Why would anyone? Nevertheless, I think that’s basically what Boat is.

And... Well, it’s 1hr25, it’s not perfect, there are bits of the script I’d definitely cut, and not *every single second of every performance is perfect*. But, blimey, there’s a fuck load in Max Barton’s production that’s just great too. Really great.

[I think “ultimate verdicts” (bleugh anyway) will probably vary depending on individuals’ tolerance for twee, and on trusting writer Kiran Millwood Hargrave’s walk down the fine line of gender presentation. (This is a fascinating example of a script that, if it had been written by a bloke, could kind of have fucked off, you know? (I watched it not knowing) I do wonder what that means for theatre generally, or for me as a critic, or for members of the modern world as audiences...)]

Have you seen The Encounter yet? Boat kicks off with a very gentle audience participation version of that! It’s pretty inspired. The sound guy (Jethro Cooke) is just perched on a shelf at the back of the playing area with his keyboard and his Mac in plain sight. He just talks to us and records us doing some sounds that he can pitch-shift and loop. To be honest, I could live with that happening in every show I ever see. It was a bit of a shame that lighting guy wasn’t sat next to him, in fact (doubtless for good practical reasons, like the size of lighting desks, rather than sudden half-assed squeamishness about realism).

Pia Laborde Noguez plays “Girl” – 14 according to the play – who is standing alone in the titular boat. It’s a rough structure here, composed of white-painted wooden pallets and surrounded by a sea of cellophane under which a bunch of tatty living room furniture sits. This kinda-abstract, kinda-not set meant I’d pretty much correctly guessed the wider trajectory of the story within about two minutes of the thing starting. But that honestly doesn’t matter; it’s the getting there and where there is and why that’s at stake here. [side note: it’s interesting, isn’t it though, how, because something’s theatre and we’ve suspended our disbelief or our literalism anyway, we can simultaneously believe her fantasy that she’s in a boat, and our fantasy that she’s *really* in her bedroom?]

I’ll try not to spoiler the thing – not least because a) I’m not sure I could accurately, and b) because it actually does seem to exist in a strange dramatic hinterland where an entirely logical explanation is never fully offered. Things that get mentioned or hinted at – so tangentially as to all feel optionally real – are: an environmental catastrophe, the wiping out of most other life on earth, fighting outside, a kind of war outside, some sort of abusive relationship, a murder, a death, blokes actually pretending to be these funny sea creatures, the blokes pretending to be sea creatures being figments of the girl’s imagination, the blokes being real, all the pretence being theatricalised imagination.

The script has a kind of Beckettian sense of urgency, which is to say; none at all. Instead, it builds up allusion by accretion. More and more stuff gets said. Not always in English. I guess it does gradually increase our understanding of the situation and the problem. But, as – arguably – a memory play, we’re already at the end. It’s also a bit like After The End (the Dennis Kelly play). There’s a sense that we might gradually be breaking out of the fantasy layers protectively woven around a terrible incident (cf. the dreadul fairy tale of Can I Start Again Please?), but we never quite break the surface. Nothing ever becomes explicit. On balance I think I’m glad about that.

Something that occurred to me watching this was that, while written by someone whose day-job is poet and novelist, in this production the most dispensable element was the language. Or rather, because Barton creates such a rich physical and theatrical world for the performance – there’s a particularly good bit with some clay covering a person’s face (just trust me on that) – that I think I could have watched this performed entirely in Slovenian (for example) and probably got *more* out of it for not having all the *writing* happening at me as well. It seems a perverse thing to say, but, to echo that Simon Stephens quote “language is noise”, I think what is properly remarkable about this script is that it entirely works *as music*, as a score for performance, and give-or-take as a fine dramatic template; a map of the peaks and troughs. What it seemed not to need, in the playing, was the actual words.